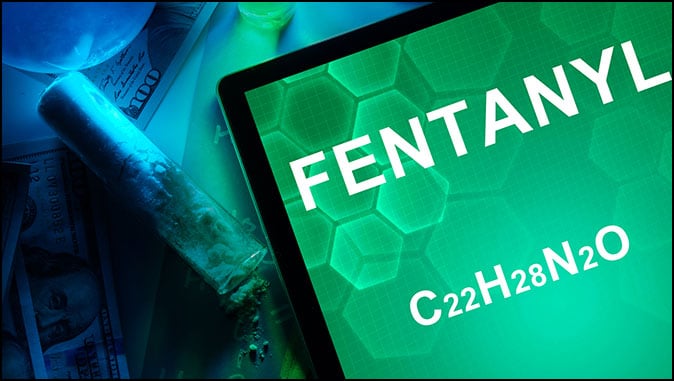 “I’m not alleging any kind of conspiracy, I suppose, but just the plain facts of it: fentanyl and Covid both came from China, China’s our main rival, they’re benefitting from the deaths of many thousands of Americans,” Tucker Carlson noted on his October 16 show.

China’s regime has been pushing fentanyl into the United States for years.

Fatal drug overdoses in the U.S. last year hit a record 70,980, according to the Centers for Disease Control and Prevention. Of those deaths, 36,500, were from synthetic opioids such as fentanyl. Cocaine and methamphetamine fatalities were also up, largely because these substances were mixed with fentanyl.

It is, as Vanda Felbab-Brown of the Brookings Institution states in a July paper, “the deadliest drug epidemic in U.S. history.”

There is no doubt where this drug comes from. “Since 2013, China has been the principal source of the fentanyl flooding the U.S. illicit drug market—or of the precursor agents from which fentanyl is produced, often in Mexico,” reports Felbab-Brown.

A Drug Enforcement Administration Intelligence Report issued in January comes to the same conclusion as to the source of deadly fentanyl.

In China, gangs work on fentanyl compounds in labs to make the drug more addictive, a former American national security official told me a few years ago. Moreover, Chinese technicians constantly change formulas to avoid detection at the American border.

In short, China’s regime is killing Americans with fentanyl. It is doing so deliberately. Carlson was right to suggest intentionality.

Beijing, at the persistent urging of the Trump administration, announced in April 2019 a ban on the production, sale, and export of fentanyl-class substances without authorization.

That ban, of course, was a step in the right direction, but analysts have pointed out that the new rules are hard to administer. “The enforcement challenge,” the Brookings paper tells us, “is formidable since China’s pharmaceutical and chemical industries involve tens of thousands of firms and hundreds of thousands of facilities, and China lacks adequate inspection and monitoring capacity.”

The implication is that criminal gangs can operate in the shadows in China. That proposition is highly debatable.

For one thing, the Communist Party, through its cells, controls every business of any consequence.

Chinese gangs are large and far-flung. In China’s near-totalitarian state, it is not possible for them to operate without the Communist Party’s knowledge. And if the Party somehow does not know of a particular gang, it is because it has decided not to.

Furthermore, fentanyl cannot leave the country undetected, as virtually all shipped items are examined before departing Chinese soil. Jonathan Bass, CEO of importer PTM Images, told Gatestone that the authorities inspect and seal every container leaving China. Fentanyl is often sent to the U.S. by mail, which means the Chinese state, through the National Postal Service of China, is the distributor. The volume of fentanyl postal traffic is large.

How large? U.S. Customs and Border Protection, based on data from its Operation Mega Flex “blitz” inspections, learned that 13% of packages from China contain some form of contraband, including fentanyl and other deadly substances. China’s postal service has to know that it has become, among other things, the world’s busiest drug mule.

Running drugs, Chinese officials believe, is a small price to pay for achieving national greatness. As Cleo Paskal of the Washington, D.C.-based Foundation for Defense of Democracies tells this author, they are obsessed with “comprehensive national power” (CNP). They meticulously measure it, thoroughly study it, and constantly compare rankings of China to other countries, especially the United States.

China’s officials will stop at nothing to increase the relative power of their regime. There are two ways to do that Paskal notes: Increase China’s CNP and decrease the CNP of other countries. China is, with malice, trying to reduce America’s comprehensive national power with fentanyl. There can be no other explanation for Beijing letting criminal organizations operate unimpeded.

The regime, consequently, is using criminality as an instrument of state policy. “Nobody I know in the law enforcement community doubts for one moment that the Chinese services know exactly what is going on, given their total internal control,” the former security official told me. “The working assumption is that Beijing knows about it, approves it, and profits from it.”

The regime has adopted the doctrine of “Unrestricted Warfare,” explained in a 1999 book of the same name by Qiao Liang and Wang Xiangsui. The thesis of the authors, both Chinese Air Force colonels, is that China should not be bound by any rules or agreements in its attempt to take down the United States.

The Chinese regime has always been characterized by viciousness. Mao Zedong, who founded the People’s Republic of China, created a kill-or-be-killed society, and its values are inhumane.

The combination of China’s relentless desire to increase its relative strength and the belief that no tactic is out of bounds means Beijing sees fentanyl as a weapon.

At the end of 2017, a friend in Maryland’s Anne Arundel County stood outside a church in Severna Park. There, he watched teenage girls and boys, all dressed in black, walk down the front steps of the local funeral home, the girls all in tears, hanging onto each other, and the boys, staring blankly away. Then came the parents, still in shock.

“You know and I know what it was,” he said “Somebody was burying their child and somebody else—somebody in China—was counting money.”

The good people of Anne Arundel — and all other Americans — are under attack. The attackers are from China, their sword is fentanyl, and deaths are the result of maliciousness in the Chinese capital.

My friend recently left a message. “There are,” he wrote, “a few old heroin addicts, but I don’t know of any old fentanyl addicts.”