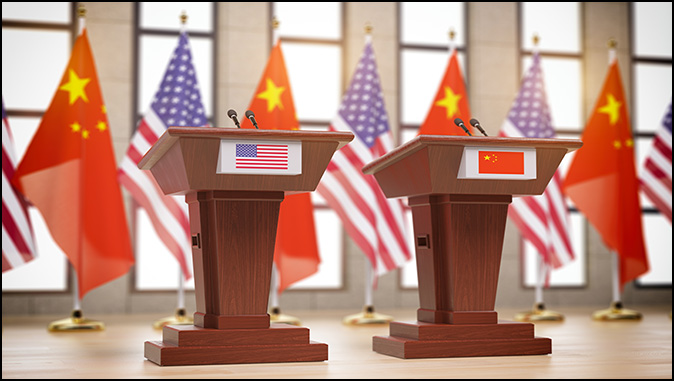 China: Biden’s White House is Lying, Joe Never Brought Up Genocide and Forced Labor with Xi
It’s a sad state of affairs when the Chinese Communist Party is more trustworthy than the U.S. president.
By Robert Spencer

Faux-president Old Joe Biden spoke with China’s President Xi Jinping for over two hours on Thursday, but what they talked about is a matter of some dispute. The White House, understandably given Joe’s marginal grasp on the English language and rational discourse these days, released no transcript, instead giving us a terse one-paragraph “readout” on the call. Then Karine Jean-Pierre told the assembled Leftist media sycophants and Peter Doocy that Tough Old Joe called out Xi for genocide and forced labor in China, and China’s Ministry of Foreign Affairs (MFA) was annoyed: Joe, the Chinese said, did no such thing. Now, who are you gonna trust? The Chinese Communist Party, or Lyin’ Joe Biden?

“According to White House Press Secretary,” the MFA declared, “‘genocide’ & ‘forced labor’ came up in last night’s call between Chinese & US Presidents. That is disinformation.” MFA spokesperson Lijian Zhao said that Jean-Pierre’s claim was “pure lies. White House spokesperson said the issues of genocide and forced labor were mentioned in the call last night, that is false information.”

Old Joe claiming to be tough when he wasn’t really, and brazenly lying in front of the entire world? Say it ain’t so! It’s a sad state of affairs when the Chinese Communist Party is more trustworthy than the president of the United States, but one thing Joe Biden has been since even before he was a politician is a skillful, relentless, and unapologetic liar.

The record of Joe Biden’s lies goes all the way back to 1965, when the future corrupt kleptocrat was a callow law student. On Dec. 1, 1965, the faculty of the Syracuse College of Law published a report about Young Joe, stating that Biden “used five pages from a published law review article without quotation or attribution” and recommended that he fail a legal methods course because of his plagiarism.

Biden stumbled through law school, finishing 76th in a class of 85. Since then, he has shown repeatedly that the primary lesson he learned in Syracuse was how to be a serial liar. For years, he claimed the accident that took the life of his first wife Neilia was caused by a drunk driver. The real story was that Neilia drove into the path of the oncoming truck. The driver’s daughter repeatedly asked Biden to apologize for lying about her father, who was driven into a deep depression by Biden’s public lies. The cheerful grifter never, of course, did so.

In September 1987, Biden delivered a speech that mixed class warfare rhetoric with his own experiences and those of his family. “Why is it that Joe Biden is the first in his family ever to go to a university? Why is it that my wife…is the first in her family to ever go to college? Is it because our fathers and mothers were not bright? Is it because they didn’t work hard? My ancestors, who worked in the coal mines of northeast Pennsylvania and would come after 12 hours and play football for four hours? It’s because they didn’t have a platform on which to stand.”

It’s gripping, right? At least until you realize that those weren’t really Biden’s family’s experiences at all. He had lifted all this from a speech by British Labour leader Neil Kinnock.

That lie torpedoed Biden’s 1988 presidential campaign. But that was a long time ago; when Biden claimed in February 2020 that he had been arrested in South Africa while trying to visit Nelson Mandela in prison, the establishment media yawned, and his presidential campaign, such as it was, went lumbering on.

And now he has claimed that he talked tough with Xi, just as he would have had us believe that he would be tough with Putin until the Russian autocrat demonstrated his palpable fear of Old Joe by invading Ukraine. The “readout” of his call with Xi doesn’t mention genocide or forced labor, but it does have this: “On Taiwan, President Biden underscored that the United States policy has not changed and that the United States strongly opposes unilateral efforts to change the status quo or undermine peace and stability across the Taiwan Strait.”

No doubt Xi trembled at the prospect of this senescent con man who is busy sending him America’s strategic oil reserves thwarting him over Taiwan. Xi probably got an up-close-and-personal look on Thursday at just how far gone corrupt Old Joe is these days and went away from the call just the opposite of chastened. But clearly, Joe and his henchmen don’t care. If Joe can look competent in front of his rapidly dwindling number of diehard supporters, regardless of the facts, it’s mission accomplished.