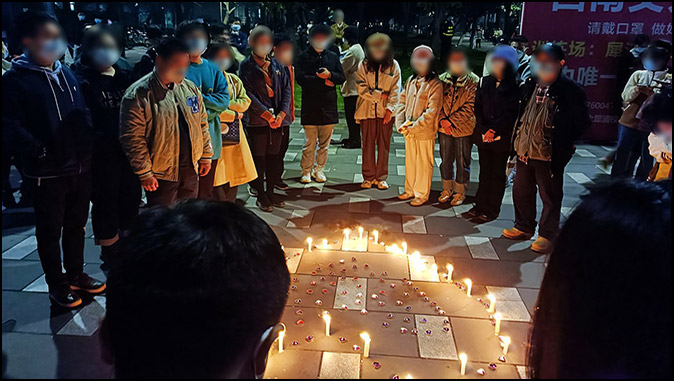 Less than a week after World Economic Forum leader Klaus Schwab was brazen and immoral enough to declare China a “role model for many nations” despite its authoritarian rule and human rights abuses (in words that were similar to those of Canada’s Justin Trudeau, who once expressed his admiration for China’s “basic dictatorship”), China has now exploded in unexpected protests over imposed COVID lockdowns. According to the Express:

Protests against strict lockdown orders are growing in China, amid signs that the Chinese Communist Party is losing its grip over the Chinese people. Protesters demanded Xi Jinping step down in a country where any direct criticism of its leaders is rare and often results in harsh punishment.

The protests are already having an adverse effect upon the Chinese economy. According to Bloomberg, “optimism had re-emerged in Chinese markets after Beijing cut quarantine periods and dialed back testing, triggering a rally that’s added almost $370 billion to the MSCI China Index.” Now those gains are suddenly “unraveling due to the protests.”

Caution is setting in despite a growing chorus of bullish China calls on Wall Street that cite cheap valuations and friendlier policies. On Monday, the Hang Seng China Enterprises Index slumped more than 4%.

This rapid hit to China’s economy obviously does not bode well for the country’s larger ambition, as it will play an as yet undetermined role in its future plans and quest for global hegemony and prestige.

What is unfolding in China demonstrates the basic and intrinsic human need for freedom, as well as the lust to enslave humans that is prevalent among the darkest elements of society. The word “revolution” is already being used to describe what has just began in China, more precisely, a white paper revolution. Keep in mind that over in Iran, the people’s revolution is expanding as well.

It is too early to tell whether the sudden explosion of protest in China is a revolution or hiccup, but there are significant factors to consider:

What is different today from past revolutions in China and Iran is their relative positions in a world that has rapidly globalized and is now undergoing frenetic change amid the notable void left by a weak America under Joe Biden. China has been expanding its influence at breakneck speed, and Biden’s handlers are still hoping to enrich Iran by means of a lucrative new nuke deal. Aspirations for world domination and global economic hegemony are now added to old fixations about domestic control of citizens. The world is watching. Should China decide to execute its protesters in a Tiananmen Square-style massacre, there will be consequences for its economy. Given China’s rapid expansion into global markets and its encroachment upon significant political arenas worldwide, it is clear that optics are important to the Beijing regime. Whatever happens next, Klaus Schwab already has egg on his face for touting China as a “global model.”

Meanwhile, it is significant that Canada’s Justin Trudeau, who has boosted China for the past decade, is suddenly distancing himself from the country. Trudeau’s move is a perfect example of how loyalties can change in an instant in the global quest for power and control. On November 1, the Canadian Security Intelligence Service (CSIS) was reported by Global News to be “increasingly concerned” about China’s interference in Canada. Then three days later, the Globe and Mail reported that a CSIS official told a House of Commons committee investigation into foreign interference in elections that “China is the ‘foremost aggressor’ when it comes to foreign interference in Western countries and ‘works within’ their political systems ‘to corrupt’ them.”

Then Trudeau endured a public dressing down by China’s Xi Jinping for an “inappropriate leak” to the papers. To demonstrate just how determined and calculated Trudeau’s plan was to lock in a Canada-China pact, it is important to go back a decade, to three years before Trudeau became prime minister of Canada. At that time, Trudeau joined the Liberal leadership race to succeed Michael Ignatieff and was shockingly open about his grand idea to invest in China. His grand plan and forecast were helped along by McKinsey & Company, a global consulting firm whose managing director, Dominic Barton, would go on to become Canada’s ambassador to China in 2019. Trudeau and Barton together “shaped the Liberal government’s global outlook and economic policies,” which heavily involved China. Throughout his powerful and influential career, Barton became well known for “serving kleptocrats and oligarchs from Moscow to Riyadh and from Beijing to Johannesburg.” Barton identified Chinese markets and money as the “keys to Canada’s prosperity.”

Now, with the protests unfolding in China, Justin Trudeau’s distancing himself from China will appear more convincing to his base of support, as he hides his past abhorrent deeds of boosting China and “stealing” Canada’s freedoms.

In authoritarian societies such as China (and Iran), there is a stark contrast between oppressed populations and the authoritarian regimes that oppress them. Given the right conditions, the people may revolt, despite risk to their own lives. The events now unfolding in China should serve as a lesson to the West as the West continues to undergo foundational shifts: cancel culture has already succeeded in repressing the freedom of expression, followed by COVID lockdown overreach and the punishment of those who refused to comply with the demands of our globalist overlords. Demonizing and dehumanizing opponents is now commonplace, along with ruthlessly promoting propaganda against them. These tactics are established historically among fascists; the tactics of the Third Reich bear that out. Notice today how strong proponents of freedom are deemed “conspiracy theorists,” “extremists,” and “racists,” while the Left continues to sow divisions that could destroy Western societies.

The critical need for Western citizens to hold their governments accountable is more urgent than ever, especially during the tenure of an American president who openly scorns the phrase “Make America Great Again.” In the current climate, the traditional foes of America are all competing for a bigger piece of the global pie, with traitors in Western nations subvert their own countries. The Chinese protests are already destabilizing China’s economy while Western friends of China such as Justin Trudeau is distancing himself from the regime. Other friends of the Communist regime such as Klaus Schwab may soon do the same, depending upon how China controls its population. If it cracks down too harshly, the consequences could be devastating to the People’s Republic, but if the Communists do not crack down hard enough, this could well mark the end of the era of Xi Jinping. Xi may also go AWOL, as Trudeau did when the Freedom Convoy arrived in Ottawa.