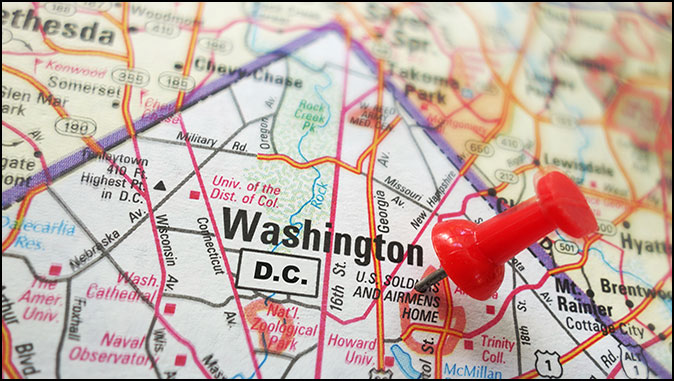 Candidate Proposes D.C. Secede from U.S. as a Black City
By Daniel Greenfield

We already have segregated dorms, workplace affiliate groups, and reading lists, segregated cities seem like the obvious next step.

Black nationalists are getting everything they want. Except for an actual separate country. So why not start in D.C.?

Martin Austermuhle, a reporter for D.C.’s NPR station, tweeted that, “Former At-Large DC Council candidate Addison Sarter is expected to propose a new ballot initiative: the Black Autonomy Act. It would create autonomous African American areas within D.C. with their own mayor and legislatures — including Anacostia, Langdon/Brentwood, Shepherd Park.”

The proposal would “preserve “East of the Anacostia River” and other predominantly African American neighborhoods in DC, like Langon Park and Brentwood, as historically African American autonomous regions. These neighborhoods would be their own cities, with their own mayor and own city Councilmembers, operating separately and free from control by the present DC government.”

I’m not sure why that’s necessary since D.C.’s mayor and most of its city council is already black, but Sarter isn’t just proposing local autonomy, but national autonomy.

“This text will also show it is international law that African Americans have the right to establish autonomous regions, that are free from control by the American government.”

I think a lot of Americans would be in favor of D.C. seceding from America, but Sarter’s proposal fails to get rid of those parts most Americans want gone.

There would be a lot more support for Sarter if he wanted to make Capitol Hill and the entire D.C. bureaucracy its own state, like the UN.

We’d even be happy to subsidize it, the way we do the UN, so long as it has no power over us.

East of the Anacostia River is the perfect area for a Black Autonomus region, beacuse it is 90 percent Black and has been systematically isolated/segregated from the rest of DC due to the 295 highway.

According to international law/ the United Nations, Black people have the right to establish Black autonomous regions. (United Nations Declaration on the Rights of Indigenous People, Article 4, pg. 8. and Article 5, pg. 9)

We have the right to establish African Americans autonomous regions because we are indigenous people.

The United Nations defines indigenous people as: “ the descendants of those who inhabited a country or a geographical region at the time when people of different cultures or ethnic origins arrived. The new arrivals later became dominant through conquest, occupation, settlement or other means.” ( United Nations Permanent Forum on Indigenous Issues)

African Americans are descendants of Africans who inhabited West and Central Africa at the time when a people of different cultures and ethnic origins, known as Europeans arrived. These Europeans later became dominant through their conquest to Africa known as the Atlantic slave trade and American slavery.

Reason and facts are notoriously eurocentric and redolent of whiteness.