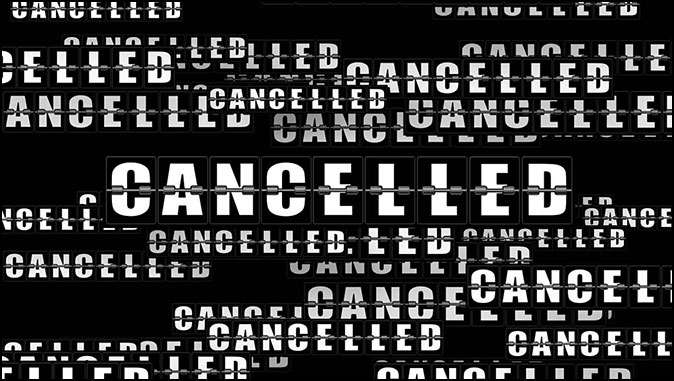 ‘Cancel Culture’: Old Tyranny in New Bottles
If the progressives succeed, they will create what the Founders feared.
By Bruce Thornton

The last few weeks we’ve seen programmatically progressive media outlets purging their political bedfellows for deviating from the “woke” party line. Some, like erstwhile New York Times editor James Bennet, confessed and apologized for their alleged sins voluntarily, like an old Bolshevik apparatchik in a show-trial. Others, like Times editor Bari Weiss and Atlantic writer Andrew Sullivan, resigned before they were hustled to the guillotine, at least salvaging some self-respect.

And it’s not just today’s people and institutions that are facing the baying mobs of mostly callow millennials who pitch a fit over anything that challenges their fragile self-esteem and “smelly little orthodoxies.” For months we’ve watched two-bit anarchists and race-hustlers knocking down monuments from our history as a graphic repudiation of America and its defining principles––a 21st century version of the old Roman damnatio memoriae, in which enemies of the state or emperor were disappeared from history by removing any public reference to them in inscriptions, statues, or books.

Indeed, today’s “cancel culture” is nothing new. It is just the latest manifestation of tyranny: As Aristotle defined it, “arbitrary power . . . which is responsible to no one, and governs all alike, whether equals or betters, with a view to its own advantage, not to that of its subjects, and therefore against their will. No free man willingly endures such a government.”

Historically, the tyrant has achieved that power by violence, especially against anyone who appear to be a threat to his ambitions or power. Herodotus has a famous anecdote about the tyrant’s use of violence. In the 7th century BC, Periander, the tyrant of Corinth, deliberating over how to keep his power safe from rivals, sent a messenger to Thrasybulus of Miletus asking his advice. Thrasybulus led the messenger into a field of wheat, and as he questioned him during their walk, broke off the tallest ears of grain. Periander got the message: “Kill outstanding citizens.”

Today’s leftists haven’t yet descended into that level of political murder. Instead they practice character assassination, the destruction of their enemies’ careers and reputations. Their weapons are not daggers or poison, but the catalogue of question-begging epithets, particularly “racism”––after all, as they keep telling us, “words are violence.” What’s also typically modern about their purges is the emphasis on personal feelings and identity, and complaints not about actual crimes or injustices, but confected ones like “systemic racism” and white cops targeting black men for execution. The subalterns at the Times who got their editor fired over an op-ed by Republican Senator Tom Cotton claimed that it made “people of color” on the staff feel less “safe,” as though affluent, privileged members of the cognitive elite live, like hoaxer Jessie Smollett, in daily fear of packs of Klansmen roaming Manhattan looking for blacks to lynch.

Therapeutic solace, not correcting injustices, is what in part the demands for “inclusion” is about. It’s not about “diversity” and working in an organization that reflects the demographic variety of America. If it were, there would be a lot more conservatives and Christians working at the Times or Atlantic. It’s about establishing a safe, comforting “herd of independent minds,” to borrow art critic Harold Rosenberg’s phrase, a “safe space” in which nothing challenges or upsets the “woke” persona of righteous “social justice warriors.” It’s about something no one people before the age of Freud ever thought about: How any individual other than the sick and destitute “feels” about himself and his circumstances.

But make no mistake, for all its therapeutic sensibilities, the “woke” herd is mainly about achieving the quintessential totalitarian aim–– the autocratic power that defines the tyrant. That’s what makes the current progressive media so important: Their incessant coverage of “cancel culture” and the violent protests gives the “woke” the power of publicity that confirm their self-righteousness, legitimizes them with the “halo effect” from prestigious cultural institutions, and bestows on them the shopworn romance of revolution, just as a poster of the Caucasian psychopath Che Guevara does in their bedrooms.

Of course, violence is still a necessary tool of the aspiring tyrant, who uses murder to remove rivals and challengers, and intimidate the mass of sheep into remaining sheep. Destroying and vandalizing public monuments and private businesses, and physically attacking the police, are telegenic advertisements for the rioters own power and the civil authorities’ weakness. Allowing this mayhem to continue for two months strengthens that power as well as the status of the mobs. And the appeasement by mayors, governors, and Democrat politicians, whether from fear or political calculation, validates the charges that America is corrupt, unjust, and guilty of institutionalized racial injustice. Why else would official authority retreat and placate the mob, going so far as to kneel before them in contrition?

And, this failure of nerve in the face of public violence allows mostly middle-class poseurs and layabouts to get all this attention and validation on the cheap. It’s a lot easier to strut, scream epithets, and throw rocks, bricks, and bottles at the cops when you know it’s unlikely that you will experience the wonderfully mind-concentrating effects of a nightstick bouncing off your skull, followed by a trip to the emergency room, and then arrest and trial. “Social justice” is one thing, but a criminal conviction staining your public record is taking it too far.

What this protest theater suggests is that this level of riots and violence is not going to bring on a revolution that radically changes the American political order. The savvier members of Black Lives Matter know this, so their aim is to create enough disorder to hurt Trump’s chances for reelection, and then install a pliant Democrat who will play Charlie McCarthy to the radical Dems’ Edgar Bergan. Whether by design or chance, the capitulation of the Democrats to the Bernie Sanders/AOC wing of the part has strengthened this tactic.

So too have the lockdowns, which have damaged Trump’s signature achievement, an economy revitalized after eight years of Obama-Biden malfeasance. Along with the subsequent ongoing riots and protests, they have created a sense that the country is dangerously out of control. I’m not one for conspiracy theories, but it’s suspicious that the second wave of lockdowns and the blue-state enabling of the violent protests happened just as the economy was showing signs of recovery.

Finally, “fundamentally transforming” America doesn’t need a violent revolution. What we are witnessing today is the acceleration of changes begun over a hundred years ago. The critical factor in moving this country from political freedom to soft despotism has been the rewriting of the Constitution, and this has been happening since Woodrow Wilson. The progressive ideal of technocratic government by means of metastasizing federal bureaus and agencies has been created, and is so entrenched in our political culture that most Republicans and “conservatives” seldom question it. Today, the idea of unalienable natural rights like freedom of speech, peaceful assembly, and bearing arms are under assault, as they have been since progressive Charles Beard in 1912 call them “obsolete and indefensible.” Hence today’s progressives agitate for limiting the Second Amendment, and curtailing free speech, which is the aim of “cancel culture.”

Also under attack has been the Constitutional order of balanced and divided government. Technocracy, as Wilson understood, requires centralized and concentrated power wielded by unelected, unaccountable experts: a “bureau of skilled, economical administration,” Wilson wrote, comprising the “hundreds who are wise” to guide the thousands who are “selfish, ignorant, timid, stubborn, or foolish.” One big step to achieving the goal of weakening the balance of powers was also taken during the Wilson administration––the popular election of senators, which stripped from the sovereign states the power to appoint senators and through their checks on executive power protect the states’ interests, rights, and powers.

So no surprise that today progressives are seeking to weaken federalism by basing the number of senators on population rather than on equal representation for each state; and by abolishing the Electoral College to create the tyranny of the majority feared by the Founders. The result of these changes, if effected, will be to further limit the freedom and autonomy of individuals, states, businesses, and civil society­­––just as during the pandemic we have seen blue-state governors and mayors suspend or compromise the natural rights to bear arms, peacefully assemble, and worship publicly.

Progressives have long desired and worked for those changes to the Constitution. If achieved they will create what the Founders feared––tyranny and the end of our political freedom, the ultimate aim of “cancel culture.” When that happens, it won’t just be this reporter or that institution that will be cancelled­­––it will be the United States and the principles, virtues, and political order that have made it the freest, richest, most powerful country in history.

Cartoon Network Is All In with the LGBTQ Agenda

How Obama Brought Back Muslim Slavery of Black People

Blacklist Iran's Revolutionary Guards The right signal to Tehran’s mullahs. By Heshmat Alavi It is…