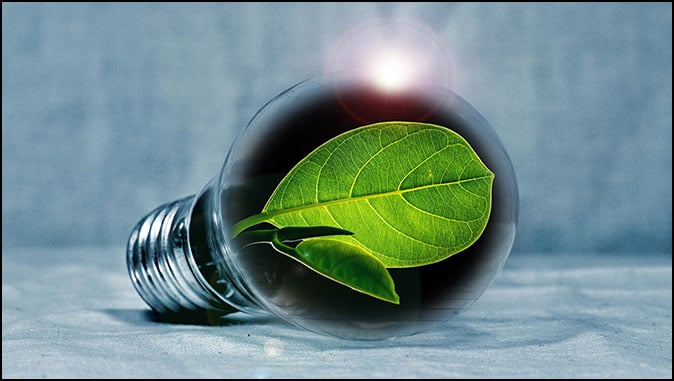 The Bay Area has the single largest concentration of ‘green’ businesses in the country. It was also the first to feel California’s rolling outages caused by the state’s messy infrastructure of solar panels and wind turbines, faulty and erratic, tied together by ‘virtual power plants’.

The real color of ‘green energy’ is black.

The Bay Area and surrounding areas are ground zero for the massive graft and grift of ‘green energy’ businesses with companies selling, reselling, manufacturing, consulting, certifying and investing in the bubble crowded in skyscrapers and office parks next to each other. And some of those ‘green’ businesses went dark when a wind farm failed and the power outages rolled out.

The real victims of the evening outages in northern California were senior citizens tethered to breathing machines who sat in the dark, watching the remaining battery power and hoping they would survive, families taking the elevator down only to be trapped inside, restaurants, already battered by lockdowns and riots, losing power and watching food go bad and customers leave.

Why is a region associated with the tech industry suffering from third world problems?

The California Independent System Operator, a state-controlled non-profit that defines the flow of power to most of the state, blamed, among other problems, a wind farm going dark.

The ‘renewables’ around which Democrat ‘green energy’ is based aren’t so renewable after all.

ISO board members, appointed by Governor Newsom, had warned that moving to 33% renewable power had left the state’s power supply in a precarious position. The logjam was the solar grid. And during a weekday heat wave, power demands rise as people come home and the sun begins to set. That’s why the outages had happened in the evening. No sun, no power.

As the Diablo Canyon nuclear plant gets shut down and gas plants are closed to meet renewable targets, there will be no power to supplement the overloaded ‘green’ power grid.

Green advocates insist that their ‘virtual power plants’ can still handle everything, routing power from the solar panels on Bob’s roof in Marin to compensate for a wind farm going offline. This power shell game looks very futuristic in presentations, but the energy grid isn’t data. Power can’t just be treated like file sharing no matter how much energy consultants insist that it can.

The Democrats and their media allies who caused this mess are pretending to be baffled.

Governor Newsom promised another investigation which this time really will “get to the bottom of it.” The inept Democrat fumed that, “people should have been told sooner and that is exactly the purpose of this investigation.” Which people? His own appointees had been warning him.

An investigation delving into who knew what and when is a face-saving exercise meant to divert attention from the role of the corrupt and cultish Democrat obsession with ‘green energy’.

There’s nothing to be stumped by and the view to the bottom is as clear as it is at Lake Tahoe.

California, along with other states, is playing musical chairs across a vast grid that ties together a diminishing number of reliable power generating systems and an increasing number of unreliable power systems. There’s still enough reliable ‘brown energy’, as green grifters call it, to offset the unreliable ‘green energy’ most of the time and most times of the day. And the game of musical chairs moves enough of it around that there isn’t a problem, until there’s a problem.

Like the Titanic, it looks great on the press releases and seems to work until it hits an iceberg.

The metaphorical iceberg sinking California’s energy grid is its heat waves. The ‘virtual power plants’ with their scalable vision of making the power supply of entire cities dependent on ephemeral natural phenomena, like the wind, water and sunlight, not to mention the solar panels awkwardly poking out over Bob’s garage, sound like the future until all the lights go out.

And then there isn’t enough wind speed, enough sunlight, or enough water in the dams.

Virtual power plants, like so much of Democrat governance, are a scam in which ideological boondoggles are credited for the hard work being done by a diminishing productive population. The scam only falls apart when the productive element is overshadowed by the unproductive.

Criminal justice reform wasn’t actually compatible with low crime rates. The overworked police forces were keeping crime rates low. Once Black Lives Matter and its police defunding riots took off, policing collapsed and crime rates went through the roof. Social justice policies weren’t compatible with higher property values. They just looked like they were until the homeless and the thugs overwhelmed neighborhoods and the bubble of the upper middle class began to burst.

The power outages are a taste of the South African blackouts that are coming to California.

And that means that it will go on having power shortages.

These are the reasons why our distant ancestors switched from ‘green energy’ to gathering and burning fuel to keep their tribe warm, cook their food, and light the night. Embracing green energy barbarism under the banner of Big Tech buzzwords inevitably leads to Burning Man.

Newsom called the outages, “unbefitting of the nation’s largest and most innovative state.”

Innovation means moving from less advanced to more advanced, and to more reliable from less reliable, technologies. Putting up windmills and swapping out nuclear for solar isn’t innovation, it’s like replacing your car with a horse and calling it a renewable smart car powered by nature..

More advanced and innovative technology does more. When it does less, it’s backward.

‘Green energy’ produces less power, less reliably, and more expensively. That makes it backward. Renewables are as innovative as the green ethos of moving to a 19th century Vermont farmhouse and buying fruit at a market stand while pretending to live like farmers. It’s a charming way for a small upper class population to live, but it’s not, as greens say, sustainable.

The real cost of renewables is not having a reliable power supply.

If the green lobby had any integrity, it would admit that switching to wind and solar means living in a world in which your power can and will fail at any time. And that’s the price of environmentalism. Instead, like the criminal justice reformers, who failed to tell the public until last month that the price of their policies would mean the end of public safety, they’re lying.

None of that will be fixed. Instead there will be slogans to make the blackouts seem progressive.

PG&E is already describing its outages as “sharing the challenge.” That sounds progressive and empowering. Especially for seniors on breathing machines or children trapped in elevators.

After some noise about investigations, California Democrats will ask the public to recognize that power is finite and go about the job of deciding who deserves to have power and who doesn’t.

The troubling interconnectedness between power and government allowed Mayor Garcetti to cut off water and power to Los Angeles businesses that wanted to remain open during the lockdown and then more recently to homes hosting parties. Companies can treat customers abusively, but a government water empire can cut off power and water for political reasons.

The ‘green energy’ regime will “share the challenge” by creating affirmative action for blackouts, determining which areas lose power and for how long based on racial and economic criteria. The wealthy will buy their own power, while anyone on the grid will be subject to the whims of Democrat political appointees dividing the spoils of a dying energy grid in a collapsing state.

The resource shortages of the green energy dark age will turn its practitioners into barbarians.

California will finally reach its 100% renewables target when its population has learned to cook in wood stoves, read by candlelight, and live in the darkness of ‘green energy’.

And then every day in this bright new dark age can be Earth Day.