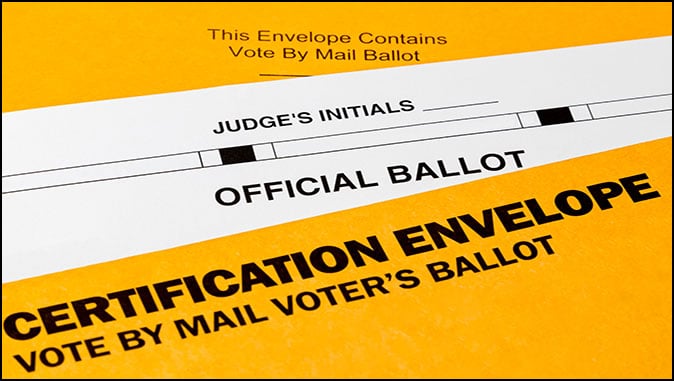 “California media called the recall election minutes after polls closed at 8:00pm Tuesday evening announcing that Gov. Gavin Newsom had defeated the recall,” the California Globe reports. In reality, Democrat mouthpieces such as the Sacramento Bee were touting Newsom’s “victory” days before the election took place. With the final tally still weeks away, Californians might wonder how that is possible. One thing they might consider is the Remote Accessible Vote by Mail system.

RAVBM allows Californians to “vote independently and privately in the comfort of their own home” by printing their own ballots and mailing them in, even with their own envelope. RAVBM was developed for the 2020 election, when similar tactics carried the day for one of the biggest scams in state history.

In 2013, a report by the Institute of Medicine found that CIRM directed a full 91 percent of research funding to institutions with representatives on its governing board. In similar style, the CIRM board overruled the Institute’s own scientific reviewers, who twice rejected a proposal to fund a for-profit company on whose behalf CIRM founder Robert Klein had lobbied.

By 2018, CIRM had spent most of the $3 billion but a ballpark figure for the number of FDA-approved cures and therapies was zero, so the promised financial windfall never materialized. Through the sponsoring agency Americans For Cures, CIRM bosses went back to the voters, this time for $5.5 billion. Signature gathering proved troublesome during a pandemic, and as the deadline approached, Don Reed, Americans for Cures vice president of public policy, began pushing for mail-in signatures.

“Your signatures might literally save CIRM, helping us put a $5.5 billion renewal bill on the ballot,” Reed wrote. “Its purpose is to fight chronic diseases, like COVID-19, the dread coronavirus—and so much more!!”

Reed provided a website with directions to print out 16 pages, including an “address block to fill out, with yourself as the signature collector, and then four (just four!) signatures from people in your county. Your next door neighbors, perhaps.” This was to be mailed into Melissa King, executive director of Americans for Cures. Secretary of state Alex Padilla ignored this blatant fraud and greenlighted the measure, Proposition 14, which prevailed 51-49 last November.

The printing of signature forms is a facsimile of the Remote Accessible Vote by Mail system. In effect, RAVBM is premature ballot harvesting in the privacy of one’s home. That could eliminate the on-site irregularities of November, 2020, without the possibility of audit – not that the 2020 results have endured such a process.

As in 2020, ballots for the September 14 recall were mailed to every registered voter in the state, which includes at least one million illegals the DMV automatically registered to vote when they got driver’s licenses. Alex Padilla handled the “motor voter” program before Newsom tapped him for the Senate seat of Kamala Harris, when Joe Biden sniffed her out for his running mate.

Shirley Weber, San Diego Democrat, took over as secretary of state, and first tried to keep Larry Elder off the ballot, claiming that he failed to file the proper forms etc. Elder sued and won, and that gave the black conservative a boost in the polls. Newsom’s handlers didn’t like it.

“I have my own operation working,” crowed House Speaker Nancy Pelosi, and the San Francisco Democrat is also “making calls to defeat the recall of our governor.” Newsom was once Pelosi’s nephew by marriage, but the governor’s connections are far more extensive.

Gavin Newsom’s grandfather was a crony of the first Gov. Brown and his son, Gov. Jerry Brown, appointed Newsom’s father to a judgeship. When he announced the state of emergency in March of 2020, Newsom hailed the leadership of Nancy Pelosi, and ever since he has ruled as virtual autocrat.

Newsom signed a $1 billion deal for masks with a Chinese company and hid the details even from fellow Democrats. Newsom locked down Californians while cavorting with colleagues sans mask at the upscale French Laundry. While many public schools remained shuttered, Newsom sent his own children to an upscale private school. And so on.

In California, where voter fraud has been institutionalized, Newsom can do that with impunity.

With midterms on the horizon, Democrats will be looking to expand print-your-own-ballot measures such as RAVBM across the country. Premature ballot harvesting does not bode well for the future of American democracy.

“Can you print out more than one ballot?” wondered Katy Grimes of the California Globe. “Did California invent an audit-proof way to steal elections?” People across the country have plenty to ponder going forward.