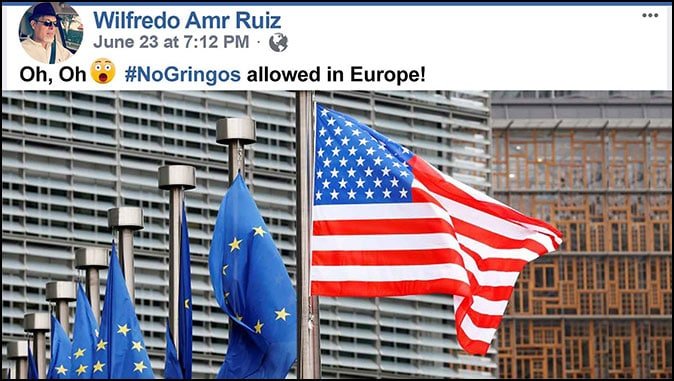 CAIR-Florida Communications Director and Puerto Rican-born Wilfredo Amr Ruiz’ social media is filled with accusations against others of racism, and many times he is 100% correct. However, because of the extremist nature of the organizations he surrounds himself with – organizations that embrace horrific bigotry in their own right – Ruiz’s exposing of racism can only be seen as a cynical act being done for nefarious purposes. Last month, Ruiz chose to use a racist slur, himself – “Gringo” – an offensive term that is used primarily against white Americans. He did so specifically to curse his own US countrymen, and he needs to be called out and reprimanded for it and more.

On June 18th, the Council of Imams of the South Florida Muslim Federation, an umbrella group for South Florida’s many Islamic extremist institutions, sponsored a Fort Lauderdale press conference announcing its support for Black Lives Matter. One of the featured speakers of the event was Camila Duarte of the Florida Immigrant Coalition (FLIC), who, during her speech, called on the US, which she said “continues to operate” on “white supremacy,” to “abolish” law enforcement and “defund” the military. The event was billed a ‘STATEMENT AGAINST RACISM AND DISCRIMINATION.’ Wilfredo Ruiz was the moderator for it. Question: Are this group and Ruiz really interested in fighting racism?

Days later, on June 23rd, Ruiz took to Facebook to proudly gloat over a report that the EU might be barring US travelers from entering Europe due to the coronavirus surge in the States. He did so, while using the racist slur, “Gringo.” The term is heard mainly within Latin American communities, and many times it is used in a humorous manner. However, Ruiz was not trying to be funny, and in the era of Black Lives Matter, a movement that both Ruiz and his Hamas-linked group CAIR strategically support (in an effort to ally with Progressives and provide cover for their organization), jokes are not exempt from the ‘racism’ label. Ruiz wrote, “Oh, oh [surprised emoji] #NoGringos allowed in Europe!”

Ruiz’ racist statement about Americans is no aberration. Indeed, his involvement with groups promoting and/or embracing bigotry is significant, as is his own past bigotry.

Apart from his position with CAIR, Ruiz is also the Public Relations Director for the South Florida Muslim Federation, the group that organized the June 18th press conference. One of the member organizations of the Federation is Masjid Jamaat Al-Mu’mineen (MJAM), a radical mosque, located in Margate, Florida. MJAM’s website contains texts that promote such things as: female circumcision, partaking in jihad (holy war), punishing homosexuals with death, chopping off hands, stoning women accused by their husbands of adultery, and vilifying Hindus. The main targets of MJAM, though, are Jews and Christians, whom at least one MJAM text labels the “enemies of Islam.”

According to Ruiz’ bio, he is also the legal advisor for the American Muslim Association of North America (AMANA) and founder of AMANA’s Puerto Rico and Connecticut chapters. In July 2010, AMANA was condemned by the Anti-Defamation League (ADL) for posting what the ADL called a “venomous” anti-Semitic video on AMANA’s official website. The video featured former KKK leader and white supremacist icon David Duke, someone who AMANA’s President Sofian Zakkout has repeatedly praised, describing him as “David Duke, a man to believe in!” And much like MJAM, AMANA’s site has propagated material labeling Jews and Christians as the “enemies of Allah.”

In July 2014, AMANA, Ruiz’ CAIR-Florida, and the Islamic Circle of North America (ICNA), a group that Ruiz performs relief work for, co-sponsored a pro-Hamas rally held outside the Israeli Consulate in downtown Miami. AMANA’s Zakkout was the organizer of the rally, and during the event, he is shown on video smiling, as the crowd repeatedly shouts, “We are Hamas.” Above photos from the event, Zakkout wrote (in Arabic), “Thank God, every day, we conquer the American Jews, like our conquests over the Jews of Israel!” Zakkout has, as well, propagated material asserting that the “Holocaust was faked.” Ruiz has affectionately referred to Zakkout as “my dear brother Sofian Zakkout”

In April 2010, Ruiz wrote an article attempting to defame the Jewish Talmud – and in doing so, the Jewish religion itself – using exaggerations and outright falsehoods. In it, Ruiz cites Justinas Pranaitis, a Lithuanian Catholic priest who was infamous for advancing the blood libel claim against Jews and who was stripped of his priesthood. Ruiz provides a link to the website, talmudunmasked.com, which contains Pranaitis’ anti-Semitic conspiracies and is produced by those alleging Jews perpetrated the 9/11 attacks.

Ruiz and the organizations he represents do not care about fighting or ending racism; they promote it. They are hypocrites and race hucksters, who put out statements against racism not because they believe in what they are doing, but because it furthers their insidious agenda and helps to deflect accusations against themselves. Their groups need to be investigated, shut down, and labeled as what they are: fronts for promoting the bigotry and discrimination they claim to be combating.

Peaceful Riots and the Left’s Reality-Avoidance

Peaceful Riots and the Left’s Reality-Avoidance Lessons unlearned after a century of genocide, gulags and…

The SPLC: An Anti-Christian Hate Group

The SPLC: An Anti-Christian Hate Group By Laurie Higgins “If the world hates you, know…

Is the Media the “Enemy of the People”?

Is the Media the “Enemy of the People”? If an enemy controlled the media, would…

A Legacy of Shame

A Legacy of Shame By Matt Ward Talk of a “legacy” is in the air.…