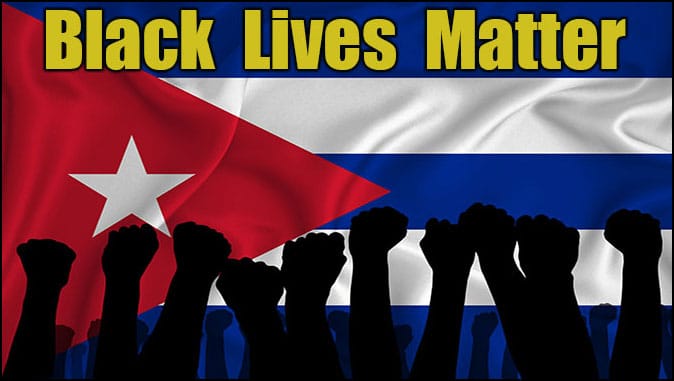 BLM Supports the Cuban Regime Oppressors
And turns its back on the suffering of Afro-Cuban blacks.
By Joseph Klein

Black Lives Matter (BLM) reaffirmed its Marxist credentials by defending Cuba’s Communist dictatorship after the regime faced the largest street protests to its oppressive rule in decades. The protesters should be angry at the United States, not the Communist regime, for the Cuban people’s suffering, according to BLM and its radical left comrades.

Black Lives Matter Global Network Foundation, Inc. charged that the U.S. economic sanctions are “at the heart of Cuba’s current crisis.” It praised the Communist regime for supporting “oppressed peoples of African descent.” BLM was thrilled that the regime provided refuge to “Black revolutionaries like Assata Shakur” (aka JoAnne Chesimard, who was convicted of being an accomplice in the 1973 killing of a New Jersey State Trooper, escaped prison, and then fled to Cuba).

BLM is so invested in weaponizing its Marxist/Critical Race Theory dogma against the United States that it willfully ignores the Cuban regime’s pernicious treatment of its own black population, consisting of dark-skinned Cubans of African descent. These blacks are invisible in Cuba’s corridors of power, where whites and lighter-skinned mulattos, who consider themselves white, are in charge.

The fact is that black lives don’t much matter in Communist Cuba. And BLM is supporting Cuba’s mostly white racist oppressors against the oppressed, including most notably Afro-Cubans.

Fidel Castro’s revolutionary movement was white man-led from the start. Ironically, Fulgencio Batista, whom Castro and his mass murderer henchman Che Guevara overthrew, was the first person of color to have served as Cuba’s president.

The radical left’s hero Guevara was an outright racist. He was also a rabid homophobe.

Guevara wrote in his 1952 diary: “The black is indolent and a dreamer; spending his meager wage on frivolity or drink; the European has a tradition of work and saving, which has pursued him as far as this corner of America and drives him to advance himself, even independently of his own individual aspirations.”

After the revolution that toppled Batista, Guevara said, “We’re going to do for blacks exactly what blacks did for the revolution. By which I mean: nothing.”

Guevara did claim to espouse racial equality following the revolution. Guevara put a twist on the notion of anti-racial discrimination in his own evil way by torturing and executing the perceived “enemies” of the revolution indiscriminately.

Blacks have remained at the bottom of the Cuban socioeconomic pyramid, despite all of Fidel Castro’s empty promises to end the entrenched racism in Cuba after he took over the country. Racial disparities became even more pronounced after the collapse of the Soviet Union resulted in the drying up of vital Soviet subsidies that had propped up Cuba’s economy. Blacks live in the worst housing in Cuba and occupy the worst-paying jobs, with virtually no opportunity for advancement.

Henry Louis Gates Jr., the Alphonse Fletcher University Professor and founding director of the Hutchins Center for African and African American Research at Harvard University, visited Cuba a number of years ago to see for himself what conditions were like for blacks living in Cuba. A journalist, Tato Quiñones, who had lived in Cuba in 1989, when the Soviet Union collapsed, told Professor Gates that “There is racial discrimination in Cuba. It gets worse every day—more apparent and more shameless.” Quiñones, who passed away last year, supported the anti-racism movement in Cuba with his research and activism.

Professor Gates also spoke with Tomás Fernandez Robaina, a professor at the University of Havana who has written extensively on Afro-Cuban issues. “Prejudice and humiliation make some people reject the fact that they are black,” Robaina said in response to Gates’ question about whether Afro-Cubans do face racism after Gates had encountered blacks who would not admit to that fact.

The failure of Fidel Castro’s Communist government to deal effectively with racism in Cuba, as Castro had promised, didn’t stop Black Lives Matter from eulogizing Castro as a hero following his death. “We are feeling many things as we awaken to a world without Fidel Castro,” the Black Lives Matter Global Network said in a statement. “There is an overwhelming sense of loss, complicated by fear and anxiety.”

The Communist regime likes to pose as the friend of the “oppressed” blacks of the world. BLM thanked Fidel Castro in its eulogy “for holding Mama Assata Shakur, who continues to inspire us.” But the regime’s generous protection of black “revolutionaries” in its own image is in sharp contrast to the regime’s incarceration of its own black population. One report on Cuba, for example, estimated that Cuba’s prisoner population in 2014 was approximately 80 percent black.

In a 2017 study by a Cuban dissident group entitled Denial, Exclusion and Repression, the Citizens’ Committee for Racial Integration (CIR) documented at least 145 cases of human rights violations against black Afro-Cubans. One of the CIR members explained that the study found a “marked inequality of opportunity” for black Cubans of African descent resulting from “structural racism” imposed by the mostly white Communist leadership.

The Inter-American Commission on Human Rights (IACHR) issued a report on February 3, 2020 noting that “the Afro-Cuban LGBTI population is disproportionately impacted by intersecting discrimination on the basis of ethnoracial origin, diverse sexual orientation, and gender identity.” The report added, “In general, the IACHR draws attention to the particular violation of the rights of Afro-Cubans in the areas of health, housing, unemployment, and access to clean water and sanitation services.”

In November 2020, the Cuban regime arbitrarily arrested the Afro-Cuban activist Juan Antonio Madrazo Luna, who is the national coordinator of CIR, and confiscated two computers as well as other property. Two other CIR members were also detained.

The real revolutionaries in Cuba today are Afro-Cuban blacks speaking truth to power. Young Afro-Cubans have used art and music to express publicly their disgust with the sclerotic racist regime that oppresses the very people the Communists falsely claim to champion.

The San Isidro Movement represents the leading edge of the Afro-Cuban youth rebellion that erupted in massive street protests throughout the country on July 11th. Rappers belonging to the movement participated in the song and video of “Patria y Vida” (“Homeland and Life”), which was released in February 2021 and became the anthem of the July 11th protesters.

The movement and the song uniquely represent “an Afro-descendant protagonism that demands fundamental transformations of the Cuban political order,” wrote Shawna Street in an opinion piece entitled “San Isidro Movement: Cuba: racism and repression” for LightHome. Street wrote this piece a little more than a month before the July 11th protests.

The regime is so afraid of the song’s message and the momentum of the San Isidro Movement that it arrested the movement’s leader, Luis Manuel Otero Alcántara, last May. The regime also arrested several rappers on vague charges of “contempt” or “disobedience.”

The arrests didn’t stop the protesters on July 11th from chanting the Patria y Vida lyrics. Indeed, the government crackdown against the San Isidro Movement leader and rappers only fired up the protesters, who proclaimed “we are not afraid” as they marched through the streets of Cuba against the regime. The protesters shouted “Libertad!” and waved American flags. The regime’s thugs retaliated by arresting, beating, abducting, and even shooting at protesters. And the government shut down the Internet in the country to prevent Cuban people disgusted with the Communist dictatorship’s iron rule from readily communicating with each other. But some protests are reportedly continuing and the tide is turning against the regime.

Black Lives Matter’s leadership could not care less about the suffering endured by the Afro-Cuban blacks languishing in Cuba. BLM is supporting the oppressors, not the oppressed, placing BLM on the wrong side of history.