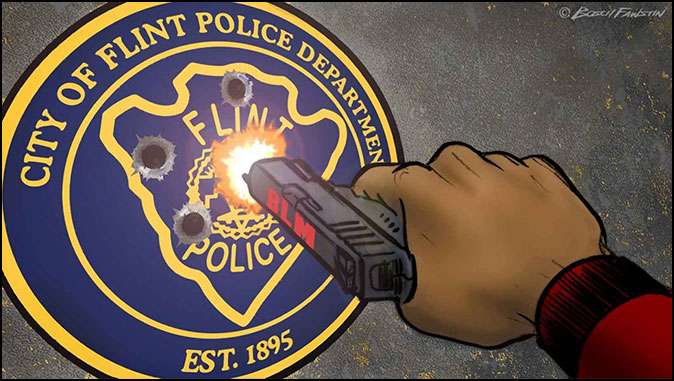 BLM and Bernie Sanders Supporter Tried to Kill Police Officer at Juneteenth Parade
The extremism that the FBI can’t see and won’t fight.
By Daniel Greenfield

Briana Sykes spent over a year broadcasting the racist hate of the Black Lives Matter movement. Last year, she reposted a message from Senator Bernie Sanders, promoted by BLM activist Shaun King, stirring up anger over false claims about Breonna Taylor, who was killed when her drug dealer boyfriend opened fire on police.

“Our criminal justice system is racist,” the Sanders smear of the police falsely claimed.

Shortly afterward she posted an anti-police cartoon distributed by the Black Berner Coalition.

Briana promoted a Black Lives Matter “economic boycott” and the claim that BLM rioters were “compelled to burn s___ down” because they’re an “oppressed group”.

Over the summer, the same account linked to Briana Sykes spread disinformation that the Trump administration had “literally killed hundreds of protesters in front of the White House”. The #DCBlackout hoax was spread by pro-BLM accounts. It was not clear who was behind a seeming attempt at inciting violence, but researchers suspect it was an enemy government.

And then after over a year of hate and Bernie Sanders memes, Briana Sykes tried to murder a police officer at a Juneteenth parade in Flint, Michigan.

According to authorities, Briana drove up to a police officer and opened fire on him. The officer shot back, wounding the 19-year-old woman. While the officer wasn’t hit, according to a black eyewitness, he “fell to the ground crying because… he didn’t want to do whatever he had to do.”

A fellow officer, black, is seen assisting him on the video.

Cell phone video appears to show that the unnamed white officer was still trying to give her a chance to surrender, shouting, “Show me your hands!”

Risking his life to avoid another police shooting didn’t pay off. It happened anyway.

The local BLM chapter’s social media responded to the shooting with hate and incitement.

“We have been inculcated to accept Native Black people being MURDERED at the hands of “PROTECT AND SERVE”!“ one poster shrieked. “WE ARE NOT IGNORANT! We also call for first degree murder charges and that this killer cop’s pension be forfeited!”

Briana Sykes died at the hospital and now authorities are trying to figure out her motive.

But the motive is all over her social media which is littered with BLM anti-police hate. Some of that hate intersects with Bernie Sanders material. The two vectors of radicalization are clear and outside the new domestic terrorism guidelines drawn up by the Biden Administration.

It was terrible news for local police and the Jewish community in Jersey City which came under attack by two black nationalist terrorists. But the new Biden domestic terrorism guidelines compound the problem that may have led to the mass shooting at a Jewish supermarket by separating out white nationalists while classifying black nationalists as “anti-government”.

The Biden terrorism guidelines describe Micah X. Johnson, the black nationalist activist who murdered 5 white Dallas police officers, as an anti-government extremist. Johnson was one of a number of BLM supporters who killed or tried to kill police officers. Briana Sykes is just the latest. And while Democrat House members have celebrated Capitol Police personnel, they’ve shown no interest in the hundreds of police officers wounded in their BLM race riots.

That’s because the Democrat establishment is deeply entangled with the racist hate group.

In Flint, the scene of the latest BLM terrorist attack, Mayor Sheldon Neeley had created a Black Lives Matter Advisory Council for the local police and had joined the hate group’s local rallies. Chief Phil Hart had forced Truth, Racial Healing, and Transformation training on the police.

Pandering to the black nationalist pro-crime hate group backfired in Flint, as it did everywhere else, with a 32% increase in murders while non-fatal shootings doubled. By the time the Juneteenth parade arrived there wasn’t much to celebrate in Flint. Just more killing.

What role did the promotion of Black Lives Matter by Flint Democrats play in the radicalization of Briana Sykes? And what impact did the Bernie Sanders fanbase, who have become notorious for promoting disinformation and extremist material, have on her state of mind?

In 2017, James Hodgkinson, a Bernie Sanders supporter, opened fire on Republicans at a charity baseball game in D.C. The FBI covered up the terrorist attack by falsely claiming that Hodgkinson had been trying to commit suicide and had not been targeting anyone despite his possession of a target list and a conversation in which he specifically sought out Republicans.

Hodgkinson, like Briana Sykes, had spent a lot of time spreading hate on Facebook. He had even belonged to a group named, “Terminate the Republican Party”.

It’s likely that this latest shooting by a radicalized Bernie Sanders supporter will be treated the same way. But even while the Biden administration defines Trump supporters as terrorists, the Bernie Sanders base and Black Lives Matter remind us who the real terrorists are.

What made Briana Sykes open fire on a police officer? The answer is right in front of us.

Democrats and their media are inciting violence against the police. It can’t come as a surprise when someone takes their big lie that police officers are racist killers and acts on it.

Briana Sykes was an ordinary product of her environment. She spent her time online listening to music celebrating violence and imbibing political propaganda demonizing the police. We don’t know exactly what went through her mind, but after being told for years that police officers plot to kill black people, she might have decided that any officer she saw was coming to kill her.

While the media has demanded that Facebook and other social media platforms censor conservatives, it has shown no interest in shutting down the kind of leftist disinformation that may have radicalized Hodgkinson and Sykes. That’s because it’s their disinformation.

Briana’s death will only feed the cycle of extremism as BLM supporters use her death to transform her into a martyr to their racist cause. Like any terrorist organization, the death of its own people fuels the BLM momentum. Every black person killed in a confrontation with a police officer incites more violence and more payouts. The ugly reality of Briana’s death is that she died trying to murder a police officer so that the Democrats who ruined her city and state can d rig more elections, and so that BLM leaders can buy more mansions.

Democrats Must Refuse to Use the Jim Crow Filibuster