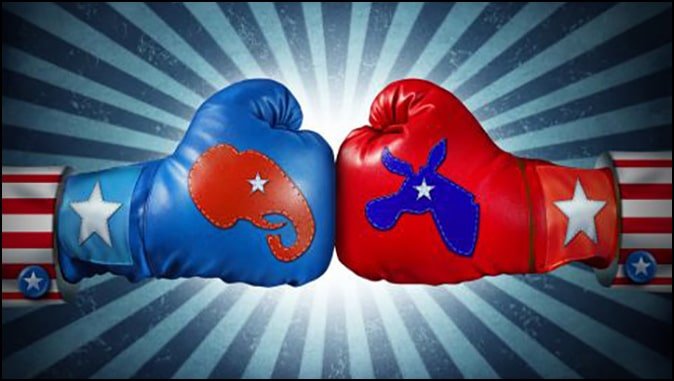 Biden’s Terror Strategy Defines Republicans as the New Terrorists
If you disagree with the Democrats, you’re a “domestic terrorist.”
By Daniel Greenfield

As the 20th anniversary of the September 11 attacks approaches, Joe Biden has made it clear that he doesn’t intend to fight Al Qaeda. Instead he’s going to fight other Americans.

The Biden administration’s newly released National Strategy for Countering Domestic Terrorism mentions Al Qaeda only once in its 30 pages. Even though the FBI continues to break up Islamic terrorist plots against America, the document only defines Muslims as victims.

Just last month a Seattle Muslim convert was arrested. The convert had discussed driving a “semi-truck” through “the gay pride parade in downtown Seattle”. Even though the arrest came shortly before the anniversary of the ISIS massacre at the Pulse nightclub, both Biden and the media ignored the potential plot and the fact that the Pulse shooting was Islamic terrorism.

“I wish to see the kuffar (non-Muslims) as I kill them, I want to strike terror in them and make Allah pleased for doing so,” the Seattle convert had boasted.

That same month another Muslim convert pled guilty to plotting to attack an Ohio synagogue and murder a rabbi. A third Muslim convert in Brooklyn was also sentenced that month for promoting terrorist plots against Americans. American converts to Islam are a major source of recruits for domestic terrorist plots. Despite that, Biden’s strategy ignores their existence.

In a flashback to the Clinton era, the National Strategy for Countering Domestic Terrorism claims that the only serious terrorist threats come from the militia movement and racists.

And the only racists whose existence the Biden administration will admit to are white racists.

Micah X. Johnson, a black supremacist who murdered 5 police officers in Dallas, is described as an “anti–authority violent extremist”. Racist and supremacist terrorism can only be practiced by members of the majority against “minority populations”. It can’t work the other way around.

Antifa is also rolled together into “anti-government”, a category that encompasses the militia movement, black supremacists, white anarchists, and everyone who isn’t a white racist.

The two categories, anti-government and racists, tell us little about the actual domestic terrorist threat, but a great deal about the Biden administration’s agenda for exploiting terrorism.

Either you’re with the Biden administration or the “anti-government extremists”.

The National Strategy for Countering Domestic Terrorism redefines the terrorist threat as coming first and foremost from political opponents of the Biden administration. And it defines that threat as a primarily political and ideological battle rather than a violent threat.

The new strategy doesn’t come up with any new ideas for fighting terrorism. Its ideas fall into the murky territory of preventing terror through everything from internet censorship to critical race theory. Biden is rebooting Obama’s CVE or Countering Violent Extremism program to target Americans in a battle of ideas against “misinformation” and “racism”.

This also defines the administration’s two approaches: indoctrination and suppression.

The National Strategy for Countering Domestic Terrorism redefines domestic terrorism as a domestic ideological struggle against people who disagree with Biden and his partisan party.

The strategy’s concluding sentence speaks of “finding ways to counter the influence and impact of dangerous conspiracy theories that can provide a gateway to terrorist violence.” It warns of “an information environment that challenges healthy democratic discourse” and cautions that, “today’s digital age requires an American population that can utilize essential aspects of Internet–based communications platforms while avoiding vulnerability to… harmful content deliberately disseminated by malicious actors online.”

The binary model is a choice between people who believe everything the media tells them or terrorists. Fighting terrorism requires a national security system that indoctrinates its citizens.

The strategy blithely notes that “the Department of Homeland Security and others are either currently funding and implementing or planning… digital programming, including enhancing media literacy and critical thinking skills, as a mechanism for strengthening user resilience to disinformation and misinformation online for domestic audiences.”

A one-word term for this is ‘propaganda’.

The “broader priority” is “enhancing faith in government and addressing the extreme polarization, fueled by a crisis of disinformation and misinformation” on the internet.

Elected officials don’t address “polarization”, they’re a product of it. They enhance faith in government by keeping their promises instead of indoctrinating and censoring the people.

Governments that suppress “misinformation” to fight “polarization” are totalitarian states.

And the best way to fight “misinformation” is with suppression and indoctrination.

The strategy document suggests that the Biden administration will be engaging in more “robust” efforts to “assist online platforms with their own initiatives to enforce their own terms of service”. It defines “private–sector online platforms” as the front line in this new suppression campaign.

But censorship is very 2016. The 2021 terrorism strategy is much more ambitious than that.

The Biden administration will only acknowledge two terrorist threats. The first threat comes from “anti-government extremists” which justifies a crackdown on any kind of political opposition and a suppression of “conspiracy theories”. The second threat comes from racists which creates an urgent need to tackle “the threat posed by domestic terrorism” with “substantial efforts to confront the racism that feeds into aspects of that threat”.

That “means tackling racism in America” with a civics education that covers “when racism and bigotry have meant that the country fell short of living up to its founding principles”.

That’s code for embedding critical race theory in schools to teach students that America is evil.

It’s hard to think of anything more likely to encourage new recruits to ISIS and other terrorist causes than divisive racist materials that devalue our country and our common heritage.

But the strategy is also much more ambitious than that, “prioritizing efforts to ensure that every component of the government has a role to play in rooting out racism and advancing equity.”

It’s easy to miss the significance of what the Biden terrorism strategy is doing here.

The National Strategy for Countering Domestic Terrorism has defined domestic terrorism as being caused by conspiracy theories, misinformation, racism, and hostility to the government. Fighting domestic terrorism means recreating the government bureaucracy and its policies around “equity” and the agendas of “critical race theory” while rooting out their opponents.

Just as Biden’s purge of the military defined military readiness and national security around a willingness to embrace critical race theory, identity politics, and hatred of America, this new counterterrorism strategy makes it the basis for national security across the government.

Every arm of the government is not only being tasked with imposing the racial discriminatory and wealth redistribution elements of “equity”, but with viewing any opposition as terrorism.

Or a gateway to terrorism.

The Obama administration abused national security to target its Republican political opponents by falsely accusing them of treason and acting as foreign agents of Russia. With Biden appeasing Putin, the Russian smear is no longer viable, but the domestic terrorist smear is.

The new strategy document will serve as a basis for using national security to target Republicans as domestic terrorists.

Since the Democrats and their media have defined virtually any disagreement as “misinformation” and “conspiracy theories”, most conservatives can be accused of terrorism.

What that will do is make it much easier to surveil and monitor political opponents by manufacturing networks that are based around “misinformation” and “conspiracy theories”.

The strategy document begins by redefining terrorism from an organized, even in the loosest sense, movement to “lone actors” who “mobilize to violence with little or no clear organizational structure or direction.” The document skips over the vital question of whether they are part of any movement calling for terrorism, instead it claims that their “fluid” ideologies “connect and intersect with conspiracy theories and other forms of disinformation and misinformation”.

The Biden administration has turned away from dealing with domestic Islamic terrorists with a clear connection to a terrorist movement like ISIS to defining ideas as dangerous without regard as to whether those ideas, theories, or movements are actually calling for violence.

By discarding the existence of any actual terrorist movement or infrastructure, the Biden administration has set a very low bar for defining terrorism and an even lower bar for complicity.

There doesn’t have to be any linkage between the perpetrator of a violent attack and the conservatives who will be blamed for acting as a “gateway” with their “conspiracy theories”.

This will mean censorship and deplatforming, but also surveillance and worse things.

The National Strategy for Countering Domestic Terrorism defines political opponents and anyone resistant to critical race theory or who questions the government as either a gateway to terrorism or possibly even inciting terrorism. This strategy will be used to target conservative non-profits through the IRS, to remove conservative speech from the internet, and to surveil hundreds of thousands of conservatives on the pretext of fighting domestic terrorism.