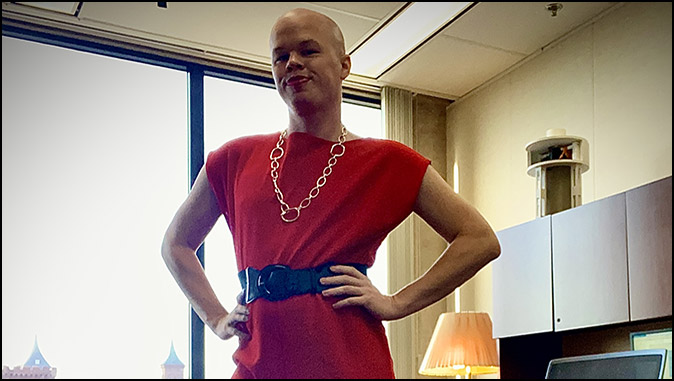 Sam Brinton, bald head and lipstick on his mustache, was promoted from “Kink Activist” to “Deputy Assistant Secretary of Spent Fuel and Waste Disposition”.

The drag queen who has been known to wear red dresses and high heels, and calls himself “they”, was celebrated as the first “genderfluid” person in the federal government. Now he has reportedly taken a leave of absence after stealing a woman’s luggage and her clothes.

According to Alpha News, Brinton flew into Minneapolis-St. Paul from Washington D.C., where he grabbed a woman’s luggage at the airport and walked away with it.

He opened up her bag and put her clothes in the drawers of his hotel room.

“If I had taken the wrong bag, I am happy to return it, but I don’t have any clothes for another individual. That was my clothes when I opened the bag,” Brinton, who belongs to a drag queen group known as the Sisters of Perpetual Indulgence, told police.

Biden’s nuclear drag queen wasn’t just stealing the identity of women, but had allegedly escalated to actually stealing their clothing.

While Brinton is in theory a career employee, serious concerns about his honesty and the political agenda behind his appointment were raised about it at the time.

A Department of Energy whistleblower had claimed that “undue political influence and preferences were applied” led to Brinton, who described having intercourse with other men who roleplay as dogs, getting an unmerited high-level position in the federal government.

The whistleblower letter noted that the drag queen had been picked “over other more highly qualified candidates”. It pointed out that Brinton’s “background is limited to select advocacy work” and lacked the credentials for a “high-standing member” of the Senior Executive Service.

Brinton has been brought in by the Biden administration after spending four years as a political adviser at a nuclear waste management company and another four years working as an activist for a gay rights group.

The Biden administration had attempted to track a mentally unstable political activist who, since completing his education, never seems to have worked in an apolitical scientific capacity, for an extremely high-level career Department of Energy position.

Now, with Brinton on leave and potentially facing charges, they have a mess to clean up.

The DOE whistleblower’s letter had warned that Brinton had integrity issues, noting the “extensive video-recorded and documented evidence that Samuel Brinton delivers inconsistent narratives in his speaking engagements and published writings, that he changes facts to suit audiences in a way that raises questions about the veracity of his statements.”

The Biden administration, which had illegally colluded to promote Brinton, ignored the obvious evidence of his mental instability and all the bright red flags that had been waved over his head.

And wrapped around his waist.

The nuclear drag queen was their latest identity politics acquisition, posing in high heels around D.C., appearing at dinners with red lipstick on his mustache and boasting about breaking ground as the first genderfluid federal employee. Ever since conservatives have taken to criticizing drag queen performances, Democrats doubled down by sending drag queens to schools to sexually groom vulnerable children. And the Biden administration decided that it needed an official drag queen of its own to show off its commitment to sexual identity politics.

Conservatives had been raising their own questions about Brinton’s honesty as far back as a decade ago when he had been touring as a gay rights activist calling for a “conversion therapy” ban by relating fantastical stories of being electrocuted to cure him of his tendencies.

As the Massachusetts Family Institute pointed out at the time, “consistent with his presentations across the country, he was full of graphic details but thin on specifics. He never names the therapist who supposedly treated him, and can’t seem to get his timeline straight.”

But the media refused to fact check Brinton because he was telling them what they wanted to hear. His success as an activist propelled him up the ladder all the way up to landing a position as the Deputy Assistant Secretary of Spent Fuel and Waste Disposition. Brinton had become too big to fail. And now he has in a way that is publicly awkward for his enablers.

The Left has worked hard to mainstream debauchery and thievery. Brinton appears to have brilliantly brought together two forks of the agenda combining the radical politics that have put drag queens in schools and legalized shoplifting and looting in cities across the country.

Brinton, who was described as boasted of having “inspired young kids by wearing stilettos to Disney Land”, just united Black Lives Matter with his Trans Lives Matter marches.

Having started out by metaphorically stealing women’s clothing, Brinton zeroed in by stealing a specific woman’s clothes to add to his extensive wardrobe of summer frocks, gala gowns and high heels. With the stolen luggage contents estimated at over $2,000, he’ll have new looks to wear at D.C. events through fall and well into winter without having to bust his budget.

All of this is wrong, but if the acolytes of the Left have proven anything, it’s that they are unable to define a right or a wrong. Nor can they recognize mental illness when it’s wearing a red dress.

Brinton is the perfect poster boy for a movement that has lost its morals and its mind.

Recently, he posed with Richard ‘Rachel’ Levine, the former Pennsylvania Health Secretary, who doomed countless nursing home residents to cruel COVID deaths while pulling his own mother out of a nursing home. As a reward, Biden made Dick a four-star admiral the same way he made Brinton into a top nuclear official. In a society gone mad, madness is a career ladder.