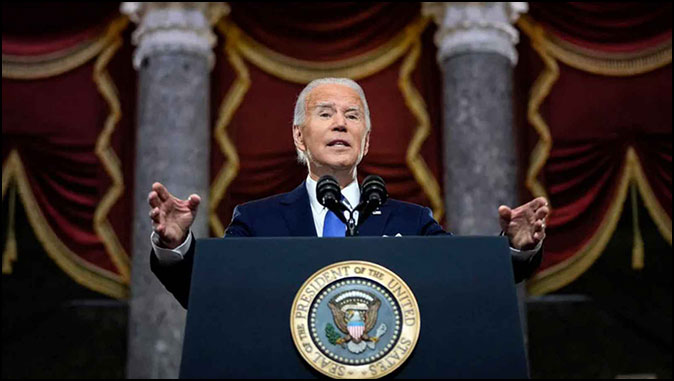 Biden’s January 6 Anniversary Speech – and His Big Lies
To top it off, Kamala compares the Capitol riot to Pearl Harbor and 9/11.
By Joseph Klein

Vice President Kamala Harris set the stage yesterday for the Left’s exploitation of the first anniversary of the Capitol riot one year ago with incendiary remarks that outrageously compared the events of January 6, 2021, with the Japanese attack on Pearl Harbor on Dec. 7, 1941 and the Islamist terrorist attacks on America’s homeland on Sept. 11, 2001. This morbid comparison dishonors the thousands of lives lost on both of those catastrophic days and is a declaration of war on the millions of Americans who reject her corrupt administration.

When Biden took his turn, the self-proclaimed unifier delivered an angry, divisive January 6 anniversary speech, falsely accusing former President Donald Trump and his supporters of placing “a dagger at the throat of American democracy” by questioning his legitimacy. Evidently, in Biden’s version of the Constitution, the right to protest is reserved for Antifa and Black Lives Matter, but not for Americans.

The only dagger at the throat of democracy is Biden’s renewed effort to take over and rig national elections under the false flag of voting rights and manufactured emergency because polls show there is no other conceivable way he could win the 2024 presidential election.

Biden asked: “Are we going to be a nation that accepts political violence as a norm? We cannot allow ourselves to be that kind of nation.”

When rioters were burning their way across the country, Kamala Harris and other future members of the Biden administration were raising bail money so they could go out and burn, loot, and beat more police officers.

After leftist radicals attempted to destroy a federal courthouse in Portland in July of that year, setting fires and breaching the courthouse doors, then-candidate Biden’s response to these clear acts of insurrection was to blame Trump, not the rioters.

“We have a president who is determined to sow chaos and division,” said Biden. “To make matters worse instead of better.”

Biden has refused to condemn either Antifa or Black Lives Matter by name. He will not condemn any of the Democrats, including his own vice president, who fundraised for the rioters. And he has met with Black Lives Matter leaders instead of prosecuting them for terrorism.

Most Americans would agree that political violence is wrong. Yes, prosecute any Capitol rioters who actually engaged in criminal behavior, but what about the Black Lives Matter, Antifa, and other leftist rioters who so far have mostly escaped any consequences for their political violence across the country in the second half of 2020? Their anarchy resulted in immeasurably more destruction, fatalities, and injuries than occurred on January 6, 2021.

This is not to excuse the criminal behavior of those who entered the Capitol illegally and engaged in destructive acts, but only to highlight the clear double standard in how the Left views the January 6th riot versus the long hot summer of leftist riots in 2020.

Biden added: “We need a president who will bring us together instead of tear us apart, calm instead of inflame, and enforce the law faithfully rather than put his political interests first.”

He is certainly not that president.

Biden’s speech is the embodiment of tearing Americans apart, of inflaming tensions, and of putting his political agenda ahead of the law.

In his January 6th anniversary speech, Biden used Trump and his seventy-four million voters in the 2020 election as foils to divert attention from his own administration’s miserable failures at home and abroad during his first year in office. The COVID-19 pandemic, skyrocketing inflation, surging crime, and illegal immigrants flooding into the country in record numbers are crises still plaguing the country as 2022 begins.

There was no call in Biden’s speech for an end to political violence on the Left as well as on the Right. He made no effort to soothe the American people’s frayed nerves or look forward with a positive agenda to solve the problems his administration has created. Instead, the Divider-in-Chief chose to look backward and hype last year’s Capitol incident as a mortal threat to democracy and the rule of law.

Biden said repeatedly in his speech that he intended to separate the truth about what happened on January 6, 2021 from the “big lies” he claimed were being told by Trump and his supporters. “We must be absolutely clear about what is true and what is a lie,” Biden declared. But the President spouted at least three big lies of his own during his speech.

Second, Biden claimed that Trump had “rallied the mob to attack.” False. During Trump’s January 6th speech at his peaceful “Save America” rally, Trump said to the attendees: “We have come to demand that Congress do the right thing and only count the electors who have been lawfully slated, lawfully slated. I know that everyone here will soon be marching over to the Capitol building to peacefully and patriotically make your voices heard.” (Emphasis added) Trump is not responsible for the violent actions of a fringe breakaway group.

Third, Biden exploited the first anniversary of the Capitol riot to promote the Democrats’ power-grab, voting “reform” legislation. He distorted what states are doing to protect the integrity of their election processes, claiming that “new laws are being written not to protect the vote, but to deny it. Not only to suppress the vote but to subvert it.”

Georgia’s new voting law, for example, has been a frequent target of Biden’s verbal attacks. But that law is actually more liberal in allowing no-excuse mail-in voting, as opposed to the more restrictive requirements of New York and Biden’s home state of Delaware where voters must have a valid reason for not voting in person.

Finally, to put things in perspective, it is worth remembering a far more dangerous attack on the Capitol and on members of Congress than the January 6th riot. On March 1, 1954, four Puerto Rican nationalist radicals invaded the Capitol and began spraying the place with bullets. They shot five congressmen, injuring at least one seriously. Former President Jimmy Carter commuted the sentences of the Puerto Rican terrorists well before the end of what would have been their full sentences.

Despite their hysterical claims of fearing for their lives at the hands of Trump supporters, no members of Congress were injured on January 6, 2021. The only violent fatality at all that day was that of an unarmed protester, Air Force veteran Ashli Babbitt, shot and killed at point-blank range by a Capitol police officer.

The January 6th breach of the Capitol was no Pearl Harbor. It was no 9/11. Such disgusting comparisons are a brazen appeal to raw emotions in a cynical attempt by Democrats, from the President on down, to push their plan to federalize elections for partisan gain and for permanent one-party control.