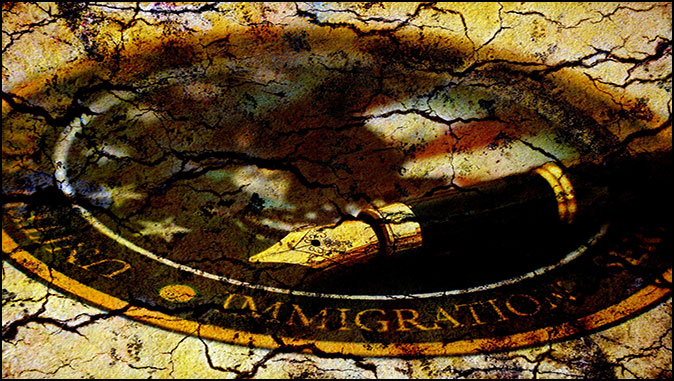 Biden’s Immigration Bill Would Be an Act of National Suicide
Figures don’t lie – but liars can figure.
By Michael Cutler

In reviewing the Biden administration’s catastrophic immigration proposals, the first question that should come to every American’s mind is, how does this benefit America and struggling Americans?

This is especially true because the Biden immigration bill would likely result in the lawful admission of more than 100 million immigrants!

I wrote about this issue in my article: “What Biden’s Immigration Policies Would Do To America: America’s adversaries can’t wait for this massive betrayal.”

Incredibly this fact has been ignored by the mainstream media, but we will explore the true magnitude of the Biden Amnesty shortly.

News coverage of immigration almost always focuses on the aliens and those who profit from the admission of foreign workers but never on the citizens of our nation.

This tactic is intended to mislead and intimidate Americans into accepting what should be unacceptable. Since we think of America as a “nation of immigrants,” anyone who would dare suggest that the U.S. government should make certain that our immigration laws are fairly but effectively enforced is attacked as being “anti-American,” “xenophobic” and “racist.”

The 9/11 Commission was crystal clear: the terror attacks of 9/11 and other such terror attacks were only possible because of multiple failures of the immigration system. Yet the media and our political leaders never make that connection.

The 9/11 Commission did not suffer from racism or xenophobia but simply sought to protect our nation from the continuing specter of international terrorism.

A review of a section of the Immigration and Nationality Act, 8 U.S. Code § 1182 – Inadmissible aliens will confirm that our laws have nothing to do with racism or xenophobia but about keeping out aliens who pose a threat to public health, public safety, national security, and the jobs and wages of Americans.

Facts are stubborn things — unless you ignore them or lie about them!

Here is an excerpt from the New York Times article that is certain to warm your heart — if you consider heartburn to be a way of warming your heart:

But the bill tries to make the most far-reaching changes in immigration law in more than three decades. It would sweep away restrictions on family-based immigration, making it easier for spouses and children to join their families already in the country. And it would expand worker visas to allow more foreigners to come to the United States for jobs.

Unlike previous efforts to overhaul immigration, the legislation does not include a large focus on increased border enforcement. Instead, the bill adds resources to process migrants legally at ports of entry and invests $4 billion over four years in distressed economies in the hopes of preventing people from fleeing to the United States because of security and economic crises.

To begin with, the supposed cutoff date of January 1, 2021 is completely meaningless. No record of entry is created by aliens who evade the inspections process. Any alien who can enter the United States without inspection can easily game this process and simply claim to have entered the United States by whatever cutoff date is established and purchase bogus supporting documents.

It will be difficult if not impossible for the adjudications officers to determine if the information in the applications for amnesty is truthful or fraudulent. I wrote an extensive article about the nexus between immigration fraud and national security in my article: Immigration Fraud: Lies That Kill – 9/11 Commission identified immigration fraud as a key embedding tactic of terrorists.

Simple background checks are inadequate to make proper decisions. The only thing worse than no security is false security!

The pressure will be on to approve applications to clear the backlog. It takes only minutes to approve an application but can take days or weeks to deny an application. Without the resources to conduct actual field investigations, fraud will permeate the adjudications process.

This will not only undermine the integrity of the immigration process but also irrevocably undermine national security and public safety.

The official report 9/11 and Terrorist Travel – Staff Report of the National Commission on Terrorist Attacks Upon the United States addressed immigration fraud thus:

Once terrorists had entered the United States, their next challenge was to find a way to remain here. Their primary method was immigration fraud. For example, Yousef and Ajaj concocted bogus political asylum stories when they arrived in the United States. Mahmoud Abouhalima, involved in both the World Trade Center and landmarks plots, received temporary residence under the Seasonal Agricultural Workers (SAW) program, after falsely claiming that he picked beans in Florida.” Mohammed Salameh, who rented the truck used in the bombing, overstayed his tourist visa. He then applied for permanent residency under the agricultural workers program, but was rejected. Eyad Mahmoud Ismail, who drove the van containing the bomb, took English-language classes at Wichita State University in Kansas on a student visa; after he dropped out, he remained in the United States out of status.

There will be no interviews and no background investigations because of the huge number of applications. The numbers of aliens will likely exceed 20 million. Yale reported that as of two years ago, there were 22.1 million illegal aliens present in the U.S.

The actual numbers would likely be far greater than the Yale estimate.

Furthermore, all legalized aliens would have the absolute right to have all of their minor children and spouses join them legally in the United States.

If, on average, each legalized alien has four children, Biden’s massive amnesty program would likely enable more than 100 million lawful immigrant children to gain entry into the United States. They would all have to be educated in our failing school systems.

How will Biden provide 100 million young immigrants with jobs as they age and join the already overflowing labor pool?

The spouses of these newly-legalized immigrants would also be able to enter the United States.

Imagine the incredible impact that this would have on America’s economy, environment, education, healthcare and infrastructure. Consider the inflationary pressure this would create and lead to more homelessness throughout the United States.

To borrow the radical Left’s expression — this would certainly not be sustainable.

If this would not be disastrous enough, Biden would also open the floodgates to foreign workers as was noted in the the New York Times article I cited above. This would be insane at any time, but especially now with so many Americans suffering from the COVID-19 pandemic with an abject shortage of jobs, vaccines and hospital beds.

Greenspan supported his infuriating call for many more H-1B visas by the following “benefits” for America and, as you will see, the last sentence of his outrageous paragraph addresses the notion of reducing “wage inequality” by lowering wages of middle class, highly educated Americans whom Greenspan had the chutzpah to refer to as “the privileged elite”!

Consider this excerpt from his testimony:

First, skilled workers and their families form new households. They will, of necessity, move into vacant housing units, the current glut of which is depressing prices of American homes. And, of course, house price declines are a major factor in mortgage foreclosures and the plunge in value of the vast quantity of U.S. mortgage-backed securities that has contributed substantially to the disabling of our banking system.

The second bonus would address the increasing concentration of income in this country. Greatly expanding our quotas for the highly skilled would lower wage premiums of skilled over lesser skilled. Skill shortages in America exist because we are shielding our skilled labor force from world competition. Quotas have been substituted for the wage pricing mechanism. In the process, we have created a privileged elite whose incomes are being supported at noncompetitively high levels by immigration quotas on skilled professionals. Eliminating such restrictions would reduce at least some of our income inequality.

It is clear that the goal of the Biden administration is to destroy jobs and wages for Americans.

I wrote about the nefarious purpose behind this betrayal of Americans by their own government in my article, For Dems to Succeed, Americans Must Fail.

Struggling Americans would be forced to rely on the government for economic subsidies. The money would come with many strings attached, pleasing the radical totalitarian control freaks who seek permanent and total control over our nation and our citizens.

This is the time for all Americans to reach out to their elected “representatives” to let them know how they want to truly be represented and not betrayed by our politicians.