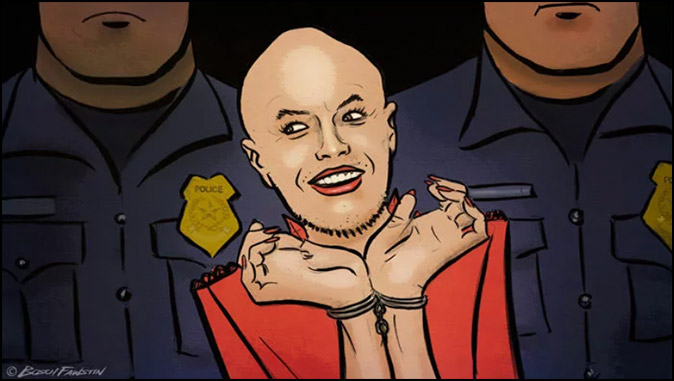 Biden’s ‘Gender-Fluid’ Nuclear Waste ‘Puppy’ Makes a Mess in Minneapolis
It all started when a woman notified officials at Minneapolis-St. Paul International Airport that her suitcase was missing.
By Robert Spencer

Back on June 29, Sam Brinton announced his new role as deputy assistant secretary of the Office of Spent Fuel and Waste Disposition in the U.S. Department of Energy, and tweeted happily about being “one of if not the very first openly genderfluid individuals in federal government leadership.” He attached a photo of himself, apparently taken in his office, featuring him wearing lipstick and a belted sleeveless red jumpsuit (or something) with American flag-themed high heels and a chain necklace. Apparently he has a novel way of amassing such ensembles, for he has just been charged with felony theft for stealing a woman’s luggage at an airport.

According to a Monday report in Minnesota’s Alpha News, Brinton, who gleefully flaunts his perversions, was actually arrested last month, but the Alpha News report is the first time the arrest has become public knowledge. Why didn’t the Biden administration come clean from the beginning and announce weeks ago that one of their showcase “diversity and inclusion” hires had been arrested? To ask the question is to answer it.

It all started back on Sept. 16, when a woman who had just flown into Minneapolis-St. Paul International Airport (MSP) notified airport officials that her suitcase was missing. “Airport records confirmed the navy blue Vera Bradley roller bag arrived at 4:40 p.m.,” Alpha News notes, “but was missing from the carousel.”

Video footage showed that the bag had been taken by none other than the deputy assistant secretary of the Office of Spent Fuel and Waste Disposition in the U.S. Department of Energy. Brinton had also just flown into MSP, but he had not checked a bag and thus had no reason to be in the baggage claim area. Brinton, says Alpha News, “left the airport in an Uber for a stay at the InterContinental St. Paul Riverfront hotel, where he checked in with the blue bag.” Then on Sept. 18, he went back to MSP to fly back to Washington, and had the bag with him.

Apparently Brinton liked this woman’s bag very much: “Surveillance video from Dulles International Airport shows Brinton traveling with the bag on an Oct. 9 return trip from Europe.” That same day, police asked him if he had taken “anything that did not belong” to him. Brinton replied: “Not that I know of.”

Later, however, Brinton admitted that he had taken the bag but insisted that it had somehow come to be packed with his own clothes. “If I had taken the wrong bag, I am happy to return it,” Brinton told police, “but I don’t have any clothes for another individual. That was my clothes when I opened the bag.”

Perhaps realizing how improbable that sounded, Brinton “allegedly called the investigating officer two hours later and apologized for not being ‘completely honest.’ This time Brinton said he took the bag because he was tired and thought it was his.” He said that once he realized he had taken the wrong bag, he “got nervous” and didn’t “know what to do,” as he was afraid that people might think he “stole the bag.” He claimed that he left the woman’s clothes in the hotel room in Minneapolis, but not the bag itself, as that would have been even “weirder.” However, police “learned that no clothing was recovered from the hotel room.”

Back on June 30, I wrote: “A modest proposal for Mr. Brinton: stop flaunting your gender fluidity and your ‘puppy play.’ Devote the time you thereby save to focusing on your responsibilities in the DOE and executing them well. You may end up being a better Deputy Assistant Secretary for Spent Fuel and Waste Disposition in the Office of Nuclear Energy in the Department of Energy if you actually focus on your job than what your appointment symbolizes about America today. But I know there is no chance you’ll take my advice because to do would negate the purpose of your appointment in the first place.” Well, I hate to say “I told you so,” but I told you so.

Sam Brinton wasn’t hired because he is a competent nuclear waste expert (although he may also be that, on top of everything else he is). He was not hired in spite of his delight in parading around in women’s clothing and flaunting being “gender-fluid.” He was hired because he does those things, and only because he does those things. The job itself was secondary. But because Biden’s administration is all about playing identity politics at the expense of virtually everything else, now there is an administration official who has been charged with a felony. If the right person had been appointed to the job in order to do the job rather than to score points in the culture war, this never would have happened.