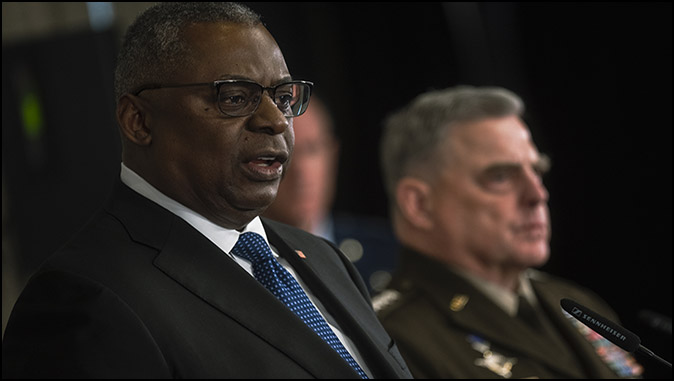 Biden’s Defense Department Urges Killing U.S. Babies for National Security
The woke military is destroying the village to save the village.
By Daniel Greenfield

Biden’s Secretary of Defense sponsored a Rand paper which claims abortion is vital to national security. The paper, “How the Dobbs Decision Could Affect U.S. National Security”, warns that the inability to promptly kill children due to the Supreme Court’s decision will lead to “higher health care, child care, and education costs”.

While lefties loved attacking Rand, a think tank created by a defense contractor that is now a subsidiary of Boeing, only when lefties fully took it over did it become capable of this level of sociopathy. Civilized societies didn’t send women into front line combat except as an act of total desperation. The Biden administration has financed a survey arguing that not only should we send women into combat, but that we’ll have deployment issues if we don’t kill their babies.

The Rand survey argues that, “Women play an integral role in the U.S. military. A threat to their health and well-being is a potential threat to our national security.” A footnote however cautions that, “although we use the term woman or women throughout this piece, we recognize that these terms are not necessarily inclusive of all individuals who might seek abortion services.”

Even abortion feminism draws the line at recognizing the existence of women as anything except a political ploy. Think of all the men who need military abortions too.

Like Admiral Rachel Leland Levine who has been accused of killing more people than every branch of the military combined. Unfortunately they were all American citizens trapped in nursing homes. But, as Rand might point out, he did dramatically cut health care costs.

No wonder they made him an admiral even if it’s of the Gilbert and Sullivan variety.

The Rand survey alarmingly warns that the Department of Defense might have to expand its child care program “to accommodate any additional births that occur as a result of women having children that they might not have had otherwise” which is a scary prospect since it already spends “over $1.2 billion annually on child care costs”.

Or about 0.2% of the F-35 fighter jet cost overruns. And the jets don’t fly themselves. Children will have to grow up to fly them. Treating children as a national security liability is backward. Without children, there’s no one in the military to defend the society or anyone to defend.

If only there were some simple and easily accessible means of preventing unintended pregnancies that could be easily taught and distributed to functioning adults.

Or maybe they’re not qualified or can be trusted to serve.

Ever since Obama took over the White House, the military has been used as a piggy bank and front for every leftist agenda item. We lost the war in Afghanistan, but the brass makes sure that every branch of the military has an equity office and is having conversations about systemic racism. The VA may be broken, but it’ll offer transgender surgery. The Air Force’s planes won’t fly, but its leadership is now black. Fat Leonard is on the loose, but Adm. Gilday will make sure everyone is reading Ibram X. Kendi. The Army can’t meet its recruitment numbers, but its ads feature lesbian weddings. At least there’s a plan to finally win a war.

Former Admiral James Stavridis and Supreme Allied Commander of NATO had an op-ed urging, “Biden and the Pentagon Can Declare War on Climate Change.”

Stavridis had learned nothing from Xerxes trying to whip the sea into shape.

Every leftist agenda item is described as a way to win wars and maximize our “lethality”.

U.S. Pacific Air Forces claimed that using the right pronouns would “improve our interoperability, efficiency, creativity, and lethality.” The People’s Republic of China must be terrified of the ruthless lethality of our correct pronoun usage. Who needs aircraft carriers anyway?

The Air Education and Training Command claims that the Air Force “increases its warfighting capabilities and lethality by attracting talent from a diverse body of applicants”.

Nothing is as lethal as racial quotas. To meritocracy.

Abortion is the latest grand contributor to our military’s lethality. Just on the wrong side.

The pathway to restoring our national security begins with a new military leadership that pushes out the cocktail party political generals and admirals who take their marching orders from the Washington Post instead of their oath and duty to defend the nation against foreign enemies.

Then maybe there will be leaders who know that their job is to kill the enemy, not our children.