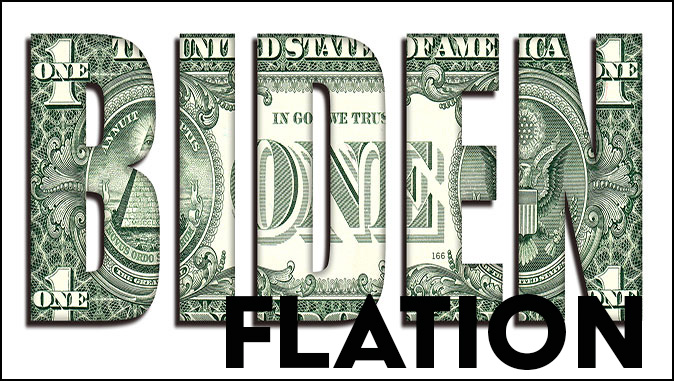 Bidenflation Continues to Surge Out of Control
But the president says Americans should have “peace of mind.”
By Joseph Klein

President Joe Biden’s runaway inflation train continues hurtling out of control. The Labor Department reported on February 10th that the Consumer Price Index (CPI) rose 7.5% in January compared to the CPI level a year ago – the highest rate of increase in four decades. Excluding gas and grocery prices, the core CPI measure increased 6%.

But not to worry, said Biden. “The fact is we’re in a situation now where you should have peace of mind,” Biden declared at an event he attended in Virginia on the same day that the spiraling CPI inflation increase was announced. Americans struggling to make ends meet every day, fill their gas tanks, and put food on the table would beg to differ. They do not have “peace of mind.”

Indeed, Americans suffering through the Bidenflation are giving Biden a deserved piece of their minds. Recent poll numbers show that a majority of Americans are not happy at all with how President Biden is handling the economy, or much else for that matter.

Americans are tuning out the Biden administration’s attempt to change the subject with happy talk about robust job data. With the prices they pay for food, gas, and other necessities growing faster over the last year than the growth of their wages, the economic conditions many Americans are experiencing remain bleak.

Energy costs, for example, rose 27% over the past year, while the national average for a gallon of gas at the pump rose to $3.36 – a 38% increase from a year ago.

Food costs rose 7% and shelter costs rose 4.4% respectively over the past year. Electricity prices rose 10.7% over the same period.

A senior economist at Moody’s estimated that American households are now paying an average of $276 per month more on expenses such as groceries and gas because of the blistering pace of inflation. This is over $3000 of additional spending on an annual basis. Call it the Bidenflation tax, which falls particularly hard on low-and middle-income Americans.

Contrary to Biden’s statements last year that the inflation problem was only transitory and his recent prediction that price increases will moderate during 2022, inflation has now become deeply entrenched in the U.S. economy. An ominous sign of what lies ahead can be seen in the February 15th Labor Department report on the producer price index, which measures wholesale prices. The producer price index rose 1% in January alone and increased a shocking 9.7% for the 12-month period ending on January 31, 2022. The latter year-to-year increase is close to a record set during the Obama administration.

Biden owns the surging inflation disaster. He and his Press Secretary Jen Psaki cannot simply wish it away.

In an effort to get itself off the hook, the Biden administration points to the Federal Reserve as the government agency most responsible for taming inflation. The Fed is now in the course of reversing its easy monetary policies that have contributed to the inflation problem. But Biden and his congressional Democrat partners have turned what would have been a slow simmering rate of inflation into an inflation rate that is now boiling over.

Biden’s green energy policies are largely responsible for the dramatic rise in overall energy and gasoline prices during 2021. Biden began his war against fossil fuel on his first day in office by shutting down the Keystone XL pipeline project (while later waiving sanctions on the Nord Stream 2 pipeline between Russia and Germany). Biden followed this up with his suspension of new drilling leases on federal lands and waters.

Biden managed to reverse America’s energy independence, which former President Donald Trump had accomplished with such success. Biden single-handedly made the United States dependent once again on what OPEC decides to produce and charge. OPEC and other countries, such as Russia, that coordinate production with OPEC (referred to as OPEC+) limited production increases throughout 2021 to support higher crude oil prices. Biden begged the oil cartel to increase production, to no avail. He also released some oil from the nation’s oil reserve, with little positive impact.

As Americans reach deeper and deeper into their pockets to fill up their gas tanks, they have Biden and his fellow climate activist Democrats to blame.

The same thing holds true for the much higher prices that Americans are paying for everything from beef, poultry, and milk to shelter and cars. Biden signed the Democrats’ partisan $1.9 trillion so-called “COVID relief” legislation on March 11, 2021. Inflation was still under relative control at that time, despite many months of the Federal Reserve’s easy monetary policies. The Consumer Price Index rose 2.6 percent for the 12 months ending March 2021.

But after the influx of nearly $2 trillion into the economy as a result of the Democrats’ reckless spend-and-borrow programs, consumer demand surged way beyond what the nation’s resources could supply. Consumers spent enormously on goods, thanks to all the money the government was handing them, while supply chain constraints limited available supplies of goods for consumers to purchase. This misalignment of supply and demand triggered inflation’s upward climb to historic levels. Biden either didn’t see this coming or couldn’t care less.

The consumer price index rose 4.2 percent from April 2020 to April 2021 (the month after the passage of Biden’s $1.9 trillion spending package). The CPI continued its steep climb thereafter.

When I last wrote about the soaring inflation rate two months ago, consumer prices had risen 6.8 percent from November 2020 to November 2021 – the fastest annual pace in 39 years. From December 2020 to December 2021, consumer prices rose 7 percent. And now with the latest 7.5 percent year-over-year CPI increase, this disturbing upward trend in the inflation rate is continuing into 2022. It all began after Biden and the Democrat-controlled Congress rammed through their reckless spend-and-borrow legislation. The U.S. national debt has now topped a record $30 trillion.

Biden’s answer to the inflation crisis is to throw even more fuel on the inflation fire. He keeps pressing for the passage of his Build Back Better legislative package that would pump trillions of dollars more into an already overheated economy.

Fortunately, the Democrats have at least one adult in their caucus – Senator Joe Manchin of West Virginia. He has put his finger in the dyke by blocking the Build Back Better bill from moving forward.

“This inflation is real. It’s harming people. It’s 7.5%. That’s a tax, and it continues to increase. It’s not decreasing,” Senator Manchin said in reaction to the latest CPI report. “This is not a time to be throwing fuel on the fire,” he added. “As inflation and our $30 trillion in national debt continue a historic climb, only in Washington, DC do people seem to think that spending trillions more of taxpayers’ money will cure our problems, let alone inflation. Congress and the Administration must proceed with caution before adding more fuel to an economy already on fire.”

Is President Biden listening to this sound advice from a moderate Democrat? Certainly not. He believes that he has all the answers and points to the robust growth of jobs since he took office as proof that his policies are working. But the truth is that these numbers are somewhat misleading. Moreover, whatever job growth has taken place over the last year occurred mostly in spite of Biden’s policies, not because of them.

As former President Trump had predicted, once pandemic restrictions were lifted and the U.S. economy opened up for business, jobs would return in record numbers and economic growth would skyrocket. Biden reaped the benefits of the foundation for economic recovery laid down by the Trump administration, most notably the success of Operation Warp Speed that accelerated COVID-19 vaccine development and approval in record time. The bipartisan economic relief packages were also passed on Trump’s watch, which propped up the economy during the nationwide economic shutdown.

As the months passed during 2021, political leaders in mostly red states decided not to wait for the Biden administration’s blessing before easing restrictions on their own that had been imposed on businesses and schools in their states. Biden scorned the governors of those states for freeing their residents from overbearing restraints before Biden and his health “experts” thought it was appropriate to do so. Biden told the governors to get out of the way. Fortunately, the governors did not listen. Even some blue states are now removing their mask mandates, which Biden still thinks is too early to do.

It was the Biden administration that got in the way of fully reopening America. By maintaining various COVID-19 mandates beyond their scientifically useful life, the Biden administration caused unnecessary job losses. And the Democrats’ government handouts incentivized some people to drop out of the labor force altogether rather than fill available job openings.

At the same time, the labor force participation rate was 62.2 percent in January 2022, as compared to 63.4 percent for the pre-pandemic month of February 2020. This means that the labor force is significantly smaller than it was in February 2020. With less people looking for work in the first place, the unemployment rate of 4 percent for January 2022 gives an overly optimistic impression of the real strength of the job recovery that Biden likes to boast about. This is because the potential workers who have decided to drop out of the labor force are not counted in calculating the unemployment rate. And they may not return anytime soon.

Moreover, someone may be counted as employed who is not working full time and not making enough money to pay his or her bills, especially in these hyper-inflation times. And workers who are fired because they refuse, for whatever reason, to be vaccinated will not likely be able to collect unemployment benefits.

Inflation and job statistics can be numbing. But Americans don’t need to wade their way through the detailed numbers to know they are hurting. Americans are feeling the economic pain in their daily lives first-hand, caused in large part by President Biden’s misguided policies. That’s why in poll after poll Americans are giving Biden a failing grade for his gross mishandling of the economy.