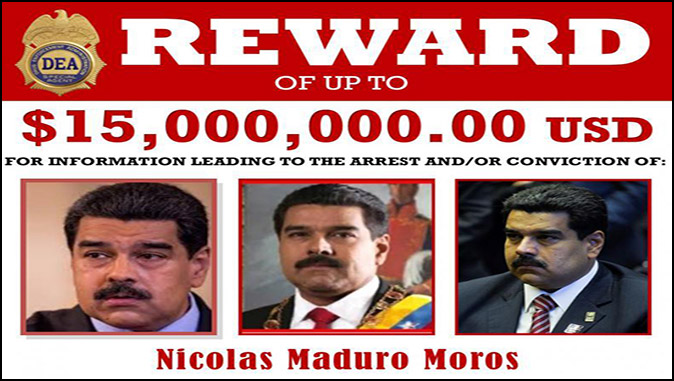 Biden Will Let Socialist Drug Cartel Drill, Before He’ll Let U.S. Drill
This is what only an enemy of this country would do.
By Daniel Greenfield

There’s good news for the narcosocialists running Venezuela, also known as the Cartel de los Soles, who starved and massacred their own people, and enabled the mass smuggling of drugs into America, “Drill, baby drill.”

After Biden admin officials came begging to Caracas, a deal has been struck and Chevron has been granted rights to pump oil. Meanwhile Biden refuses to allow American oil companies to drill for oil.

The deal was made with Maduro: a guy who is on our most wanted list.

This is what only an enemy of this country and a supporter of Marxist terrorists would do.

The Biden regime is claiming that its dirty deal with the Maduro regime is part of local negotiations and a humanitarian package.

“We have long made clear we believe the best solution in Venezuela is a negotiated one between Venezuelans,” said a senior Biden administration official who spoke on the condition of anonymity under rules set by the White House. “To encourage this, we have also said we were willing to provide targeted sanctions relief.”

Why can’t the White House publicly talk on the record about this?

The official dismissed reports that the administration was acting to ease an oil shortage and high energy prices exacerbated by Russia’s invasion of Ukraine. “Allowing Chevron to begin to lift oil from Venezuela is not something that is going to impact international oil prices. This is really about Venezuela and the Venezuelan process,” the official said, where the United States is “supporting a peaceful, negotiated outcome to the political, humanitarian and economic crisis.”

Oh right, because he’s lying through his teeth in a way that absolutely no one can possibly take seriously.

The same administration claims that our oil prices are high because of Russia and that its limited strategic release changed oil prices, but that Venezuelan oil won’t change oil prices.

And that’s after the Biden administration turned to Venezuela to boost oil production after initially weaseling about it.

The administration is exploring “alternatives” in response to the OPEC+ decision to cut oil production by two million barrels a day, President Biden said on Thursday, but when asked if Venezuela was among those alternatives he added only, “there’s a lot of alternatives; we haven’t made up our mind yet.”

Asked whether Venezuela was “one of those alternatives,” the president said, “There’s a lot of alternatives; we haven’t made up our mind yet.”

“What would Venezuela have to do in order for the U.S. to ease sanctions?” a reporter asked.

As it turns out, not so much.

Last March U.S. officials paid a secret visit to Venezuela at a time when the administration was looking for alternative oil suppliers to help offset the effects on gas prices of banning Russian energy imports in response to the invasion of Ukraine.

“President Biden would rather enrich a murderous dictator than support drilling in America,” Sen. Tom Cotton (R-Ark.) tweeted in response to the latest report.

Now he’s going ahead and doing it while sabotaging any attempts at oil production in America.