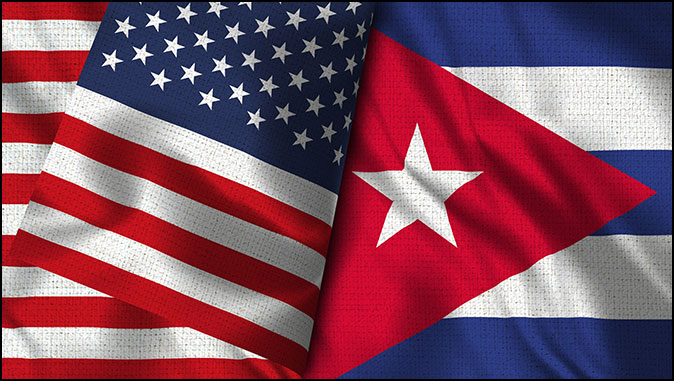 Biden to the Rescue of Cuba
Embracing a barbaric Stalinist regime.
By Humberto Fontova

“This week, White House officials announced steps to move away from the “maximum pressure” approach of sanctions and diplomatic isolation toward Cuba and Venezuela that was a centerpiece of former President Donald Trump’s Latin America strategy,” (italics mine) reports Foreign Policy ….”The new policies include allowing increased U.S. remittance flows and select U.S. travel to the island.”

“I think we’ve seen this song before…This is going to increase the amount of money that’s going to the dictatorship.” Said DeSantis during an appearance at the University of Miami Health System’s Don Soffer Clinical Research Center….“I think people, particularly down in South Florida, understand, the minute you’re sending more of this to the island, that’s going right into the pocket of the Cuban dictatorship, that is not going to help the people of Cuba realize freedom,” DeSantis said.

Among the most preposterous jingles from the Castro regime’s U.S.-based agents-of-influence is the one about how U.S. hostility to the Castro regime has “historically failed” so it’s high time to “try something new” by engagement.

Given his heavy Cuban-American constituency and his many Cuban-American political colleagues and advisors (plus his sharp common-sense) Gov. DeSantis, as shown above, knows full well that Biden’s “new” approach to Cuba is “a song we’ve seen before,” especially during the Obama terms.

And the results of Obama’s “engagement” (surrender) to the Castro regime were precisely the ones predicted by “crackpot Cuban-American hard-liners!” (i.e. people who experienced the regime): a wealthier Stalinist regime, more repressive at home, and more confident in its terror-sponsorship and drug-running abroad. All this was meticulously documented right here at Townhall.

In fact, the only genuinely revolutionary Cuba policy of the past 40 years was Trump’s, by simply fully enforcing the sanctions that came to be known as the Cuba “embargo.” This was also documented here at Townhall.

“Me and my staff were all Fidelistas,” boasted Robert Reynolds, the CIA’s “Caribbean Desk’s specialist on the Cuban Revolution” from 1957-1960. The boastful ex-honcho of the most lavishly-funded intelligence agency in human history boasted of his affection for the KGB-protégé whose lifelong craving was to nuke his homeland to a snickering Fidel Castro himself upon a visit to Cuba in 2001.)

“Everyone in the CIA and everyone at State was pro-Castro, except [Republican] ambassador Earl Smith.” (CIA operative in Santiago Cuba, Robert Weicha.)

The shrewd CIA’s advice was taken, and thus January 7, 1959 marks a milestone in U.S. diplomatic history. Never before had the State Department extended diplomatic recognition to a Latin American government as quickly as they bestowed this benediction on Fidel Castro’s that day.

Nothing so frantically fast had been bestowed upon “U.S.-backed” Fulgencio Batista seven years earlier. Batista had in fact been punished by a U.S. arms embargo and heavy diplomatic pressure to resign for a year. Batista was subsequently denied exile in the U.S. and not even allowed to set foot in the country that “backed” him.

In fact, during Castro’s first 16 months in power, the U.S. State Department made over 10 back-channel diplomatic attempts to ascertain the cause of Castro’s tantrums and further “engage” him. Argentine President Arturo Frondizi was the conduit for many of these and recounts their utter futility in his memoirs.

Result: In July 1960, Castro’s KGB-trained security forces stormed into 5,911 U.S.-owned businesses in Cuba and stole them all at Soviet gunpoint — $2 billion was heisted from outraged U.S. businessmen and stockholders. Not that all Americans surrendered their legal and hard-earned property peacefully. Among some who resisted where Bobby Fuller, whose family farm would contribute to a Soviet-style Kolkhoze, and Howard Anderson, whose profitable Jeep dealership was coveted by Castro’s henchmen. Both U.S. citizens were murdered by Castro and Che’s firing squads, after torture.

In July 1961, JFK’s special counsel Richard Goodwin met with Che Guevara in Uruguay and reported back to Kennedy: “Che says that Cuba wants an understanding with the U.S.; the Cubans have no intention of making an alliance with the Soviets. So we should make it clear to Castro that we want to help Cuba.” (How Che managed a straight face during this conversation requires an article of its own.)

Result: Soviet Nuclear missiles, locked and loaded, in Cuba a year later — and pointed at Goodwin and Kennedy’s very homes.

In 1975, President Gerald Ford (under Kissinger’s influence) allowed foreign branches and subsidiaries of U.S. companies to trade freely with Cuba and persuaded the Organization of American States to lift its sanctions.

Result: Castro started his African invasion and tried to assassinate Ford. You read right. On March 19, the Los Angeles Times ran the headline “Cuban Link to Death Plot Probed.” Both Republican candidates of the day, President Ford and Ronald Reagan, were to be taken out during the Republican National Convention. The Emiliano Zapata Unit, a Bay Area radical group linked to the Weather Underground, would make the hits.

Jimmy Carter, in a good-will gesture, lifted U.S. travel sanctions against Cuba and was poised to open full diplomatic relations with Castro.

Result: More thousands of Cuban troops spreading Soviet terror (and poison gas) in Africa, more internal repression, and hundreds of psychopaths, killers, and perverts infiltrated the boats and shoved their way on the Mariel Boatlift.

Ronald Reagan sent Alexander Haig to meet personally in Mexico City with Cuba’s “Vice President” Carlos Raphael Rodriguez to feel him out. Then he sent diplomatic whiz Gen. Vernon Walters to Havana for a meeting with the Maximum Leader himself.

Result: Cubans practically take over Grenada, El Salvador, and Nicaragua. (But unlike the aforementioned Democrats, Reagan responded to Castro’s response — and with pretty dramatic results. (Recall the U.S. liberation of Grenada.)

Result: Three U.S. citizens and one resident who flew humanitarian flights over Florida straits (Brothers to the Rescue) murdered in cold blood by Castro’s MIGS. Cuban agent Ana Belen Montes moles her way to head of the Defense Intelligence Agency’s Cuba division, resulting in the deepest and most damaging penetration of the U.S. Defense Department by an enemy agent in modern history.

Obama outdid all of the above. And former National Security Advisor John Bolton summed up the results back in 2019: “While the last administration wanted to improve relations with the tyrants in Havana, and to convince the world that they posed no threat, the Cuban regime tightened its grip and extended its tentacles…In no uncertain terms, the Obama administration’s policies toward Cuba have enabled the Cuban colonization of Venezuela today.”

By the way, some of those ex-CIA honchos are not pleased with my expose’ of their calamitous idiocies in Cuba. So they viciously maligned my books—but without actually refuting one syllable of my thoroughly footnoted quotes and findings.