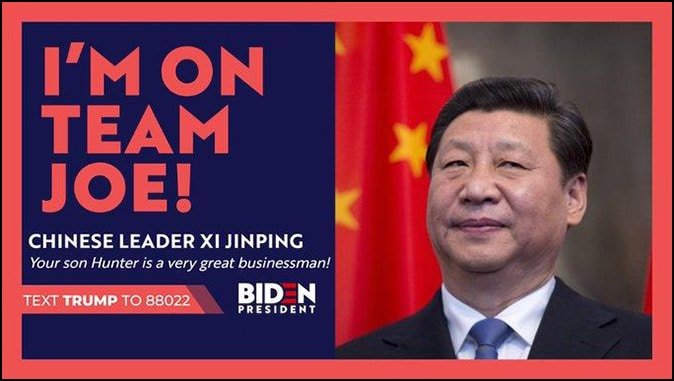 Biden Sold Out America to China While Working for Hollywood
Biden: “There is no question that you’ve got the right guy with the right influence.”
By Daniel Greenfield

Outside the JW Marriot in Los Angeles, Rev. Eddie Perez Romero was being handcuffed by the LAPD.

Rev. Romero was holding up a “Free China” sign outside a Chinese Ministry of Commerce conference. Inside was the LAPD’s boss Mayor Antonio Villaraigosa, along with Governor Jerry Brown, and Vice President Joe Biden, who were palling around with China’s future dictator, Xi Jinping.

“My hope is that Vice President Joseph Biden, Governor Jerry Brown and Mayor Antonio Villaraigosa will rise above any pandering spirit, but as true statesmen, intentionally blur the artificial line between the economy and human rights,” Rev. Romero said.

Biden though had a very different agenda on his mind.

It was 2012 and Joe was thinking about his future. A year earlier his best friend, Senator Chris Dodd, had left the Senate to run the MPAA. The MPAA was Hollywood’s trade association and the movie industry, reading its own writing on the wall, wanted into China, and was willing to sell its soul to make a deal.

Dodd had been one of the sleaziest figures in the Senate, even by the low standards of the era, eager to do favors for any well-heeled industry from finance to entertainment. His friendship with Biden gave him a direct pipeline into the Obama administration. And Dodd gave Biden a pipeline into Hollywood.

“Joe was our champion inside the White House,” Dodd later said.

Two years later, in 2014, Biden began an address to the MPAA by joking, “there have been the rumors all those years when Chris and I served in the Senate that although I was chairman, he controlled me.”

“We’ve just given new life to those rumors,” he continued, describing how he had left a meeting with Obama and Chancellor Merkel, telling Obama that he had to address the MPAA.

“There is no question that you’ve got the right guy with the right influence,” Biden concluded.

And that’s exactly what Biden had been proving in Los Angeles as he surrounded Xi with Hollywood tycoons, especially Jeffrey Katzenberg, a major donor to his 2020 campaign, and cut a deal with the Chinese thug to increase the quota of Hollywood movies allowed in by the Chinese Communist regime.

“Keep me in mind for Chris’ assistant later,” he joked.

Biden understandably lost track of the difference between “your share” and “our share” because Hollywood has been a reliable fundraising machine for Biden. What was good for Hollywood was also good for Biden. Katzenberg got Oriental Dream Works, a $330-million joint venture with the PRC, and eventually hosted Biden’s first Southern California fundraiser which brought in $700K.

2012 was a big year for the adulterous nuptials of Hollywood and the Chinese Communist Party.

A few months after the meeting between Biden and Xi, China’s Wanda Group bought AMC Theaters for $2.6 billion. The Wanda Group, run by a billionaire Communist oligarch with close ties to regime officials, is working on a Communist theme park, and its investors allegedly include Xi’s sister. Beyond just owning the theaters, Wanda owns the Legendary Group which has a hand in a long list of movies from Spike Lee’s BlacKKKlansman, to Pokemon, along with the King Kong and Jurassic Park sequels.

The only reason Hollywood movies can play in China is because the Communist leadership directly profits from them and controls what goes into them, either directly through ownership, or by forcing the industry to submit scripts for the approval of its Communist censors. HUAC would be superfluous today. The big studios who make up the MPAA are all working for the Communists. And they’re proud of it.

That’s why a Tibetan character vanished from Doctor Strange (Disney has been the worst offender when it comes to appeasing the Communist leadership), why Taiwanese and Japanese flag patches vanished from Tom Cruise’s jacket in the Top Gun sequel (the movie was backed by Tencent, the PRC social media monopoly whose social media controls allow the regime to censor dissent and which has its paws on Wonder Woman, Venom and many other blockbusters), and why World War Z erased references to China covering up the origin of the zombie outbreak. That act of censorship now appears prophetic.

Biden’s brokering of the relationship between Hollywood and the Communist elite was more than financial, it was also cultural. Hollywood traded access for control, not just over what Chinese people saw, but what Americans were likely to see. Biden’s donors got richer and American movies were reduced to a bunch of CG cartoons with limited dialogue that had to win Communist approval.

And it wasn’t just Hollywood.

In 2013, a year after the Xi event at the Marriot, Joe and Hunter Biden flew on Air Force Two to China. BHR Partners was founded that year and included Hunter Biden as a board member. Underneath all the rhetoric about the ennobling virtues of globalism was some very parochial and familial profiteering.

The big Chinese partner in the BHR arrangement was Harvest Fund Management which, coincidentally enough, in 2012 was targeting Hollywood with an $800 million investment fund. That same year, you could find Bruno Wu, who had been working with Harvest, and Chris Dodd, along with Harvey Weinstein, playing roles at the Asian Film Summit in Toronto. And the money didn’t just go one way.

The Delaware Board of Trade was incorporated in 2013. Despite its name, the DBOT was not a government agency, but a penny stock startup which received a $3 million loan from New Castle County.

New Castle County had approved the issue of $15 million in revenue bonds to fund the DBOT “stock exchange” by touting the “globally recognized leaders in the financial services industry” running it. DBOT’s founders included people with experience in stock exchanges and financial services, and Dennis Toner, who was described as a “top aide to Vice President Joe Biden.”

Toner, Biden’s deputy chief of staff, is in the news for denying that Tara Reade ever told him anything.

Reade’s decision to tell Toner and Ted Kaufman was a pretty poor one. Both are longtime Biden men and considered as close to the boss as family. And they’ve reaped the benefits of that closeness.

Emperor Caligula appointed his horse to the Roman Senate. After Obama won, Ted Kaufman was temporarily appointed to the Senate. If there was anything odd about appointing a Biden advisor to sit in the Senate, it became odder when Senator Kaufman delivered the opening statement in favor of Toner’s appointment as Post Office Governor, by vouching for his “loyalty” working for Joe Biden.

Reade might as well have taken her complaint to Biden, as to Toner and Kaufman.

The current New Castle County exec has since called DBOT’s founders criminals and threatened to sue after the company was disposed of as a “distressed asset” in exchange for shares of Ideanomics. Ideanomics is a Chinese crypto company trading as a penny stock and the software that served as collateral for the loan has been described as worthless. The chairman of Ideanomics is Wu.

The manager of DBOT-I LLC was listed as John Hynansky. The car dealer is a Biden pal with extensive Ukrainian ties who had lent Biden’s shady brother half a million dollars and had received $20 million in government loans to start a Porsche luxury car dealership in the Ukraine.

Biden’s vaunted foreign policy expertise has consisted of brokering deals between family members, donors, and foreign interests. These deals haven’t been good for America, but they’ve worked out very well for members of his crooked family, as well as assorted donors, camp followers, and local boys.

But his biggest deal was helping broker the Chinese takeover of the American entertainment industry.

Xi’s visit to Los Angeles hit on all the right cultural notes. He schmoozed Hollywood bigwigs and their errand boys, like Dodd and Biden, he watched a Lakers game, and cheered Obama’s 100,000 Strong China initiative to have a hundred thousand American students study in the Communist dictatorship.

“I can say with confidence my visit has been a full success,” Xi declared.

In China, culture serves the agenda of the Communist government. Unlike the Russians, who struggled vainly to stem the impact of American culture, their Chinese counterparts decided to control it at the source. Biden was a key figure in negotiating the terms on which the PRC would control Hollywood.

In 1962, the Manchurian Candidate depicted an effort by Communists in China, Russia, and elsewhere to kidnap and brainwash American soldiers. The modern remake replaced the Communists with a corporation and the Chinese doctor with a South African geneticist. China could not be offended.

While Biden, Katzenberg, and Xi were partying at the Marriot, human rights protesters were calling for freedom, and being arrested by the henchmen of a one-party Democrat city and state for their trouble.

Even while Biden was falsely claiming that the Hollywood sellout would improve human rights in China, the rise of China was already violating human rights in America. Now, as Chinese drones fly over American cities, police stalk empty streets, social media monopolies monitor every single phone, and Democrat officials dismiss the Bill of Rights while locking up millions of people, our rights are gone.

And Joe Biden is the Manchurian Candidate who long ago sold out the country he now seeks to rule.