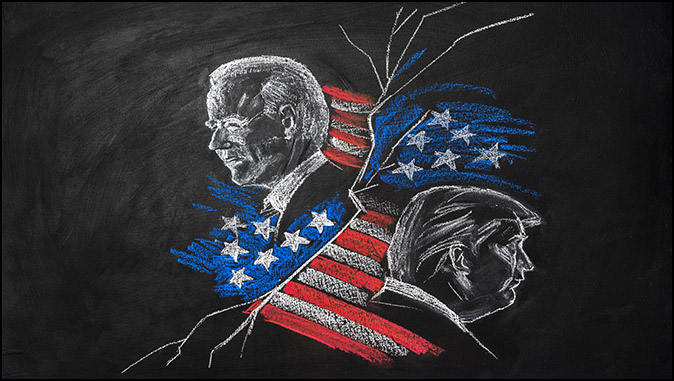 Biden Says He’s ‘Making Sure’ Trump Will Not Become President Again
More fascism from the alleged president.
By Robert Spencer

Old Joe Biden, the ostensible president of the United States, on Wednesday held one of his Potemkin press conferences before the gathering of sycophants and propagandists known as the White House press corps. When a reporter said that Trump’s movement was “still very strong,” Biden laughed derisively and said, “Oh yeah?” He added, “Well, we just have to demonstrate that he will not take power by — if we — if he does run. I’m making sure he, under legitimate efforts of our Constitution, does not become the next President again.” How can he make sure of that? He didn’t say, and of course the sycophants didn’t ask. But Biden’s remark was in keeping with his fascist agenda. Fascist? Yes.

Back on March 23, 1933, German Chancellor Adolf Hitler spoke before the Reichstag, urging it to pass an Enabling Act that would give him dictatorial powers. He said that this was urgently needed in light of an imminent threat to the nation. Hitler claimed that in 1918, Marxist organizations had seized power in Germany, leading to “a time of boundless misfortune for Germany, that is to say the working German Volk [people].” But he assured the Reichstag deputies that “the German Volk itself has increasingly turned away from concepts, parties, and associations which, in its eyes, are responsible for these conditions.” Does this sound familiar? It should. These are the same rhetorical notes Old Joe Biden sounded during his ominous Thursday night speech branding Donald Trump and his supporters as enemies of the state.

Probably more out of historical illiteracy than historical awareness, Biden’s handlers chose September 1, 2022 for Biden’s profoundly disturbing and un-American speech that echoed Hitler’s Reichstag speech. It was the 83rd anniversary of Hitler’s invasion of Poland when Old Joe stood before an ominous red and black backdrop and recalled Hitler’s demonization of his opposition, declaring that “Donald Trump and the MAGA Republicans represent an extremism that threatens the very foundations of our republic.”

What will the next step be? Will Biden and his henchmen try to force Republicans to join up with the uniparty pseudo-Republicans who allow the Democrats to implement their full hard-Left agenda, Mitt Romney and Liz Cheney and Susan Collins and Lisa Murkowski and Adam Kinzinger and all the rest, and to denounce and repudiate Trump and any idea of making America great again? If so, what will happen to those who do not? Will they’ll be prevented from taking any Congressional seats to which they’re elected, and even arrested as enemies of “our democracy”?

That’s what Hitler did with the Communists he blamed for Germany’s woes. In his Enabling Act speech, Hitler accused the Communists of “pillaging, arson, raids on the railway, assassination attempts, and so on–all these things are morally sanctioned by Communist theory.” He also declared that the German people were already in the process of defeating these great enemies. He spoke of “the necessity of thoroughly rejecting the ideas, organizations, and men in which one gradually and rightly began to recognize the underlying causes of our decay.” He added: “Filled with the conviction that the causes of this collapse lie in internal damage to the body of our Volk, the Government of the National Revolution aims to eliminate the afflictions from our völkisch life which would, in future, continue to foil any real recovery.”

Biden sounded the same notes, declaring that the nation was bouncing back despite the best efforts of these internal enemies to destroy it: “American manufacturing has come alive across the Heartland, and the future will be made in America — no matter what the white supremacists and the extremists say,” as if America-First patriots, whom Biden was busy smearing as white supremacists and extremists, were against American manufacturing. “I made a bet on you, the American people,” Biden continued, “and that bet is paying off. Proving that from darkness — the darkness of Charlottesville, of COVID, of gun violence, of insurrection — we can see the light. Light is now visible.”

These resonances are real and ominous. For the first time ever in over two hundred years of American history, a president has declared that his primary political opposition stands outside the bounds of acceptable political discourse. The logical next step is the one Hitler took: he blamed one of his strongest adversaries, the Communist Party, for the Reichstag Fire, and outlawed it accordingly. With the Communist deputies barred from being present, the Reichstag passed the Enabling Act, and Germany’s unfortunate fourteen-year experiment with a representative republic was over.

But that couldn’t possibly happen here, could it? Biden just said he was making sure Trump wouldn’t become president again, but surely that’s just talk, right? It would be as outlandish and frankly inconceivable as the prospect of a president of the United States standing in front of a couple of Marines and a strongly Naziesque backdrop and denouncing his legitimate political opposition as enemies of the state. Simply could not happen! Not in “our democracy”!