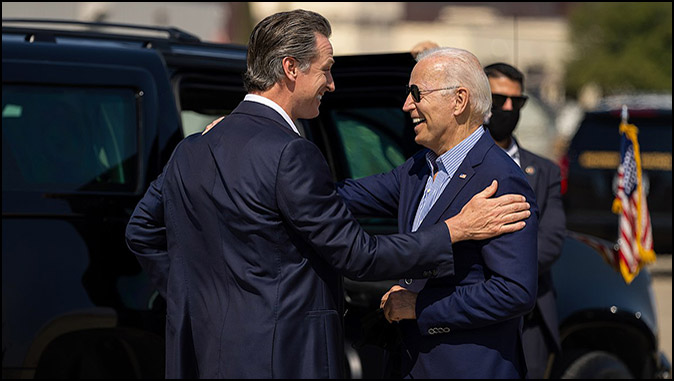 Biden & Newsom: So Much Alike
And in so many intriguing ways.
By Lloyd Billingsley

On November 20 Joe Biden turned 80, joining Dr. Anthony Fauci, 81, Nancy Pelosi, 82, and Dianne Feinstein, 89, in the Democrats’ octo-oligarchy. Back on October 10, California Gov. Gavin Newsom marked 55 years. Despite the age difference, Newsom and Biden are alike in significant ways. Consider, for example, their troubles with reading and writing.

“For years, Newsom has been very open about the fact that he suffers from dyslexia,” Edsource reported in 2018. Newsom “overcompensated and learned to develop other skills,” including a highly developed ability to memorize texts. Newsom considers these skills to be assets in his political career, but the people have to wonder. The California governor shows no evidence of reading or memorizing anything about his state’s landmark achievement in civil rights.

As Thomas Sowell noted in his 2013 Intellectuals and Race, declines in minority enrollment at UCLA and Berkeley were offset by increases at other University of California campuses. More important, the number of African-American and Hispanic students graduating from the UC system went up, including a 55 percent increase in those graduating in four years with a GPA of 3.5 or higher.

The African American Sowell, a graduate of Harvard, earned advanced degrees from Columbia and the University of Chicago long before any kind of affirmative action was in place. The longtime fellow at Stanford’s Hoover Institution has written books on the subject such as Affirmative Action Around the World: An Empirical Study, Discrimination and Disparities, and The Economics and Politics of Race.

Gavin Newsom, who holds a degree in political science, shows no familiarity with these works, all available in audio. The governor’s own book, the 2014 Citizenville: How to Take the Town Square Digital and Reinvent Government, was written “with Lisa Dickey,” also a ghostwriter for Jill Biden and Sen. Tammy Duckworth.

Rather than engagement on the facts, Newsom indulges the tired tactic, pioneered by the Soviet Union, of smearing people of different views as mentally ill. “America in 2019 is California in the 1990s,” Newsom told Politico. “The xenophobia, the nativism, the fear of ‘the other,’” and so on.

In a saying attributed to Mark Twain, a person who does not read good books has no advantage over a person who cannot read. As Mark Bowden (Black Hawk Down) noted in 2010, Joe Biden “makes few references to books and learned influences.” The “indifferent student” who exaggerates his scholastic record also “borrowed liberally, and without attribution,” from British politician Neil Kinnock. If anybody thought the plagiarist Biden had a lot of help on his books it would be hard to blame them.

As a child, Biden struggled with a stutter and Newsom had similar issues. In addition to his dyslexia, Newsom spoke with a severe lisp. He overcame it through speech therapy but still sounds hoarse. When angry, as Katy Grimes of the California Globe noted, the governor lapses into “a gravely pirate voice,” and in one interview of less than six minutes Newsom pounded the table a full 59 times.

In similar style, Biden responds to an honest question by telling a worker “you’re full of sh*t,” and when a reporter asks about inflation, Biden brands him a “stupid son of a b*tch.” Both men have a temper and both seek to quash peaceful protest.

Gov. Newsom locked down the state in March of 2020 and in May he ringed the state capitol grounds with hundreds of CHP officers in riot gear. According to the Los Angeles Times, the California National Guard put an F-15C fighter on standby to “buzz” any crowds daring to resist stay-at-home orders. Four National Guard members, who spoke on condition of anonymity, told the Times the orders were allegedly handed down orally or through text messages rather than in the official manner. The governor’s office denies it ever happened.

Thousands of National Guard Troops ringed off Joe Biden’s inauguration and remained in the city until the end of the month. Amid growing protests, Biden said Americans “need F-15s and maybe some nuclear weapons” if they want to fight the government. In his September 1 speech, with Marines lurking in the background, Biden clearly showed he is willing to deploy military force against the people.

At football games, college students have been exercising their First Amendment rights by chanting “f**k Joe Biden,” passed off by establishment media as “let’s go Brandon.” Biden has heard the voices. Instead of showing up at a recent Philadelphia Eagles game, the Delaware Democrat sent Jill, but even her presence evoked choruses of boos.

Biden sees a threat in people who want to make America great. On the other hand, as a presidential candidate, Biden proclaimed that the Chinese communists were “not bad folks,” and not even competition for the United States. Gov. Newsom also has a soft spot for China.

In April of 2020, Newsom announced a $1 billion deal for 200 million masks with Chinese company Build Your Dreams (BYD), an electric vehicle company not known for protective equipment. The governor said the deal was “not political” but shielded the details even from fellow Democrats.

Newson and Biden show no familiarity with the best scholarly works on China, including The Black Book of Communism,” which numbers the victims of China’s Communist regime at more than 60 million, worse than Stalin’s USSR. Statistics like that would be easy for Gov. Newsom to memorize. His dyslexia could be to blame, but as with Biden it might be willful ignorance.

Joe Biden has been in government since 1972. Newsom’s ruling-class provenance goes back much farther.

In 1996, Gavin Newsom served as a volunteer for the mayoral campaign of Willie Brown, the powerful former Assembly Speaker who appointed his girlfriend Kamala Harris to lucrative sinecures. Mayor Brown appointed Gavin Newsom to San Francisco’s Parking and Traffic Commission and later to the San Francisco Board of Supervisors. Like Harris, Newsom was on the elevator, but there was more to it than the Browns.

Gavin Newsom’s aunt Barbara was once married to Ron Pelosi, brother-in-law of Nancy Pelosi. Barbara and Ron divorced in 1977, when Gavin was 10 years old, but his connection with Nancy remains strong. In March of 2020, when he announced the state of emergency, Gov. Newsom told Californians they were blessed to have the leadership of Nancy Pelosi.

“I’m your puppet,” say Biden and Newsom. “Your every wish is my command.”