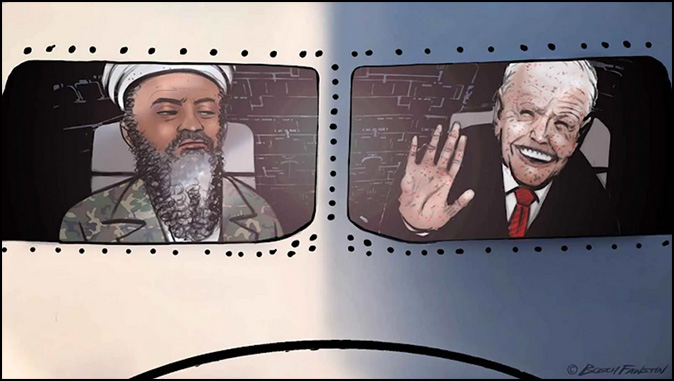 Biden is Paying Osama bin Laden’s Old Airline to Fly Out Afghans
The Taliban are getting rich from the immigration business. And we’re paying for it.
By Daniel Greenfield

Ariana Afghan Airlines used to fly Al Qaeda terrorists from Afghanistan to the Middle East. As a sideline, it also flew guns and drugs on behalf of the Islamic terrorist organization. While Ariana was controlled by Osama bin Laden, it was allegedly coordinated by Viktor Bout, the Russian arms dealer whom Biden has offered to trade for pothead WNBA player Brittney Griner.

But these days Ariana has a new mission and we’re the ones paying for it.

The Biden administration is buying bulk tickets on the Taliban airline, according to a congressional report, and paying “approximately $300,000 per flight to a Taliban controlled airline in order to allow U.S. citizens and Afghan allies to continue evacuating.”

Taliban Air flies Afghans to Qatar, a close ally and state sponsor of Islamic terrorists, and then they go on to America. With tens of thousands to over a hundred thousand Afghans in the pipeline, the Taliban could see over $100 million in payments from Biden for its airline.

Ariana Afghan Airlines, notorious for its terrorist connections and its poor safety record (the Europeans banned it some years back and it’s ranked as one of the most dangerous airlines in the world although face masks and probably burkas are compulsory), is once again under the control of the Taliban. And it’s a crucial part of the Taliban business model.

The Taliban sabotaged Biden’s retreat, keeping Americans and Afghans with visas trapped behind enemy lines to profit from their evacuation. And they’ve been doing just that. While the media has been shy about covering what’s going on, the Taliban have been quite open.

Taliban officials have boasted of handing out over 700,000 passports to collect $50 million.

“We are issuing up to 4,000 passports daily and we aim to increase the number to 10,000,” Shirshah Quraishi, deputy director of Afghanistan’s passport department, bragged.

It’s a myth that the Taliban are not allowing Afghans to leave. They’re happy to facilitate the trip for the right price. They’re also willing to let Americans and other foreigners visit since “the Taliban leadership also made more than $1 million in visa fees paid by more than 4,100 foreign nationals who have visited Afghanistan over the past year.” Many if not most of those visitors are involved in humanitarian aid organizations which the United States is also financing.

The Taliban profit from the Biden administration buying bulk tickets on its terrorist airline, they profit from issuing the visas to Afghans leaving the country and they profit from them once they come to America. A Los Angeles Times profile of a family of Afghan refugees describes them getting welfare payments and then sending money back home to Afghanistan.

Such remittances are a commonplace reality among immigrants and a major incentive for mass migration. A number of Latin American economies depend on remittances leading them to encourage mass migration to America. The Taliban have done the same thing in Afghanistan.

In 2020, total Afghan international remittances were estimated at $780 million making up 4% of the failed state’s GDP. Between the mass migration and the collapse of Afghanistan’s economy, the numbers fell, but will likely rebound to become much higher in the coming years.

Much of this money is sent through the Islamic ‘Hawala’ system often used by terrorists.

The Biden administration deliberately insulated remittances from sanctions on the Taliban and Al Qaeda’s Haqqani network going so far as “authorizing transactions involving the U.S.-blacklisted Taliban or Haqqani Network that are incident and necessary to the transfer of noncommercial, personal remittances to Afghanistan.”

Biden had created a massive loophole for funding Al Qaeda and the Taliban.

Afghans in America are collecting welfare and sending cash back home. Some of it may be going to their family members while other payments may end up in the hands of the terrorists. Either way, the Taliban and Al Qaeda will take their cut.

And the flow of remittances will make the Taliban Air flights and the visa payoffs seem minute.

Taliban financial institutions break up remittances into installments, thereby potentially profiting from interest rates (despite the formal Islamic stricture against it), charge fees and peg payments to their artificial exchange rate against the dollar which has little connection to reality.

The Taliban profit in three separate ways from just the payments alone, and will profit in many more ways as the money is injected into an economy that they control. That’s why they want to hand out 10,000 visas a day if they can. The more Afghans come to America, the more money the terrorists make when they send payments back home. It’s also why so many of the Afghan migrants are young military-age men. They were never refugees, but guest workers meant to move to America, get jobs, collect aid and send the money back to the Taliban terror state.

The flow of military-age men also helps disguise a terrorist infrastructure allowing Taliban, ISIS and Al Qaeda to inflitrate America, build criminal and terror cells to provide more cash and plot attacks among the huge number of undocumented migrants flown out by Biden in the last days.

The Afghanistan refugee crisis is actually a deliberate effort by the Taliban to create a sustainable funding model for their failed terrorist state through humanitarian aid, passports, flights and remittances. And Americans are footing the bill at every stage of the scam.

Under Osama bin Laden, Ariana Afghan Airlines was a system for transporting terrorists. Under the Taliban, it will play that role once again. Even the Clinton administration had sanctioned Ariana, while Biden is funding Ariana flights, allowing the terror airline to maintain its legitimacy and finance its operations. On September 11, Al Qaeda infiltrated our nation and flew airplanes into our buildings. Now, the terrorists are inflitrating their cash cows and terrorists into America.

And we’re paying their airline for the tickets.