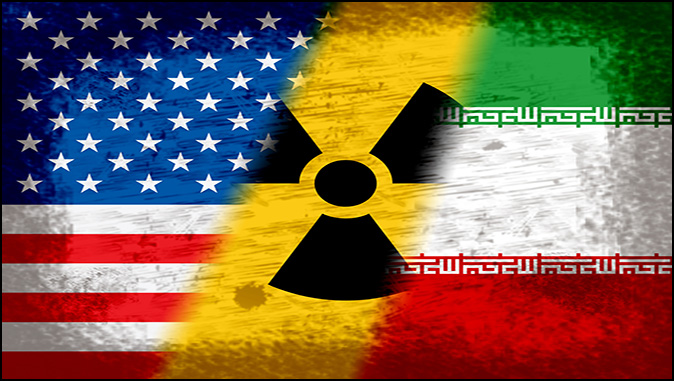 Biden & Iran Nuclear Deal Negotiations
Why the Biden administration must walk away immediately.
By Joseph Klein

The Biden administration has hit the pause button for now on its attempt to revive the disastrous nuclear deal with Iran known as the Joint Comprehensive Plan of Action (JCPOA). The U.S. envoy for Iran, Rob Malley, said last month that the Biden administration was not going to “waste time” on trying to revive the JCPOA at this time. The administration is still not willing to pull the plug completely, however. President Biden refuses to acknowledge that Donald Trump was right when he withdrew the United States from the JCPOA and squeezed the Iranian regime economically to dry up its sources of funds used to fulfill its aggressive ambitions.

Since Mr. Malley indicated that there would be a temporary hold on negotiations with Iran, things have gotten worse. The Biden administration needs to immediately let go for good of any lingering wishes it may still harbor to bring back to life a deal that was fatally flawed from its inception.

Iran has continued to stonewall in providing information and cooperation requested by the International Atomic Energy Agency (IAEA) regarding the presence of nuclear material particles at certain undeclared locations. The IAEA is investigating the Iranian regime’s non-compliance with its obligations under the Non-Proliferation Treaty (NPT) safeguards agreement to which Iran is a party – an agreement that is separate and apart from the JCPOA.

The IAEA Executive Board responded to Iran’s continuing intransigence by adopting a stern resolution on November 17 that sharply criticized Iran for its failure to cooperate with the IAEA. The resolution enumerated measures that Iran must take so that the IAEA can verify whether Iran will finally comply with its NTP obligations. The Iranian regime decided to retaliate instead.

Mohammad Eslami, chief of Iran’s Atomic Energy Organization of Iran, confirmed a report by Iran’s ISNA news agency that the regime had begun to enrich uranium to 60 percent purity at its fuel enrichment plant in Fordow. Enriching uranium to the 60 percent purity level is a big step towards achieving the critical mass of uranium enriched to 90 percent that is nuclear weapons-grade.

The Iranian regime was not bluffing. The IAEA confirmed that “Iran had started producing high enriched uranium – UF6 (uranium hexafluoride) enriched up to 60% – using the existing two cascades of IR-6 centrifuges in the Fordow Fuel Enrichment Plant, in addition to such production that has taken place at Natanz since April 2021.” Iran has also installed more “cascades of advanced IR-6 centrifuges,” the IAEA added in its statement.

In addition to the Iranian regime’s flagrant violations of its treaty obligations under the NPT, Iran is supplying Russia with drones and other lethal weapons that the Russian military has used to terrorize Ukrainian civilians. Russia has launched Iranian-made drones to destroy vital energy infrastructure facilities with the purpose of literally freezing the Ukrainian people into submission. Iranian and Russian officials have also reportedly reached an agreement to begin manufacturing, inside of Russia, weaponized drones designed by Iran. As if this were not bad enough, Iran has agreed to supply Moscow with surface-to-surface ballistic missiles.

In short, the Iranian regime is an accomplice to Russian President Vladimir Putin’s war crimes and crimes against humanity in Ukraine.

And then there is the Iranian regime’s plots to send hit squads to assassinate Americans and U.S. allies’ citizens abroad. Just in recent days, Islamic Revolutionary Guard Corps (IRGC} Commander Mojtaba Fada threatened that Iran would “frog march [Benjamin Netanyahu] to Iran wearing a leash and a slave collar.” Fada also spoke of the destruction of the Jewish state of Israel, which he libeled by calling it a “child-murdering regime.”

The Iranian theocracy is the real “child-murdering regime.” Government forces have murdered to date more than three hundred of its own people, including approximately fifty children, in the course of its deadly crackdown on widespread protests during the last two months. One of the victims was a young boy who was traveling in a car with his family and was not even part of the protests. Iranian authorities have also arrested thousands of people, subjecting the detained prisoners to horrifying conditions.

The protests began on September 16, 2022, in response to the death of a 22-year-old Kurdish-Iranian woman, Jina Mahsa Amini, while she was in the custody of the regime’s “morality police” for not wearing her head covering properly. The protests have since then spread throughout the country and have become a rallying cry for freedom of the Iranian people from the Iranian regime’s tyrannical rule.

Iran’s leaders have demonstrated repeatedly that they are running a murderous, terror-sponsoring, double-dealing, outlaw regime. Instead of taking a temporary pause from trying to revive the JCPOA, the Biden administration should bury the nuclear deal permanently and consider taking other actions as necessary to prevent Iran from producing or obtaining any nuclear weapons.