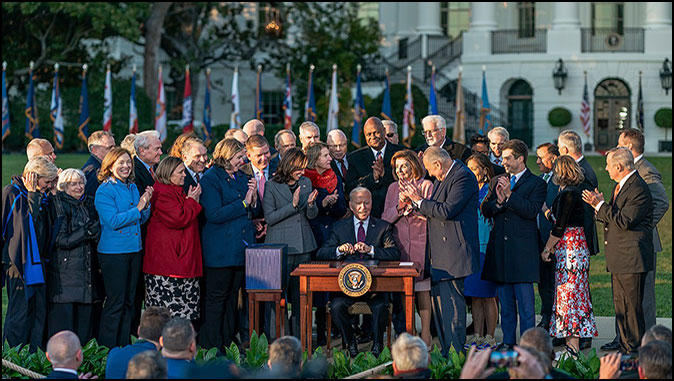 Biden-Harris Prescriptions for Their Sagging Approval Ratings
More reckless spending – and another recipe for election fraud.
By Joseph Klein

Biden promised repeatedly that he would institute policies based on science that would “shut down” the COVID-19 pandemic. Biden even staged his own version of mission accomplished on Independence Day when he claimed that the U.S. had achieved “independence” from the coronavirus. Two variants later, Americans’ lives are still being controlled in large measure by the virus.

Former President Donald Trump handed the Biden administration three vaccines developed in record time as a result of Trump’s Project Warp Speed. Now, however, more Americans have died from COVID-19 on Biden’s watch than died while Trump was in office.

Now Biden is lamenting that “there is no federal solution” to the pandemic, passing the buck to the nation’s governors to handle. Biden was singing an entirely different tune last August when he told Florida’s Governor Ron DeSantis that he should “get out of the way” of people who are trying to “do the right thing.” Biden has been doing the wrong thing by failing to ramp up sufficient testing capacity in time and issuing an onerous vaccine mandate, causing the American people needless suffering and the loss of their freedoms.

The first year of Biden’s failed presidency has been marked by his disastrous execution of total military withdrawal from Afghanistan, the flood of illegal immigrants into the United States in record numbers, soaring inflation at a rate that has not been seen in decades, rampant crime, the return of dependence on foreign sources of energy, and more. Yet Biden and Harris continue to insist that their Build Back Better plan and the federal takeover of how voting is conducted in the states are the nostrums for the country’s ills.

The Biden administration would have Americans believe that spending trillions of dollars more with borrowed money on non-productive social welfare and Green New Deal projects would some how bring down the cost of living for average Americans and strengthen the economy. To the contrary, all this will do is overheat the economy, which will further fuel inflation. The Federal Reserve will then have to pump the brakes on the money supply faster than it was initially planning to counter inflation, which could precipitate a recession. We’ve seen this movie before, and it doesn’t have a happy ending.

Nor will there be a happy ending if the Democrats get their way with their so-called voting “reform” legislation. One of the bills they are pushing is known as the “John Lewis Voting Rights Advancement Act,” which would require certain states to get approval from the Justice Department’s civil rights division before they can enact changes to their voting laws. The other bill is called “The Freedom To Vote Act,” which would override guardrails that various state have put in place to prevent voter fraud in balloting as well as in the counting of votes.

Both Biden and Harris claim that the nation’s “democracy” is at stake if the nationalization of voting in the fifty states is not promptly passed. Harris declared during her CBS “Face the Nation” interview on December 26th that the failure to pass their legislation would “take ourselves off the map as a role model” globally. “This is literally about our standing in the world, it’s about the integrity of our democracy,” Harris added. For that reason, Harris even called the voting legislation battle one of the most significant national security issues that America is facing today. Threats from an aggressive China, from a potentially nuclear armed Iran, and from Islamist terrorists who now have a sanctuary in the Taliban-controlled Afghanistan evidently are not as serious in Harris’s eyes.

It is laughable for Harris, her boss, and their Democrat colleagues in Congress to pose as defenders of “the integrity of our democracy.” They want to take down the fundamental pillars of America’s unique constitutional republic, including separation of powers, checks and balances, an independent judiciary, protection of individual liberties, and a federalist system. These pillars are what make America the leading role model for the world.

The Founding Fathers were concerned about the potential excesses of “democratic” majorities. They established the Senate as the smaller, more deliberative legislative chamber that would be in a position to cool down the passions of the majority controlling the House of Representatives at any particular point of time.

James Madison explained that the Constitution’s framers considered the Senate to be the great “anchor” of the government and a “necessary fence” against the “fickleness and passion” that could agitate the general public and members of the House of Representatives. George Washington is said to have expressed this sentiment another way, telling Thomas Jefferson that the Senate was created to “cool” House legislation just as a “saucer” was used to cool a hot drink.

Joe Biden once believed in this role for the Senate when he was a senator from Delaware. Regarding the filibuster, Biden said back in 2005 that ending the filibuster “is not only a bad idea, it upsets the constitutional design and it disservices the country. No longer would the Senate be that ‘different kind of legislative body’ that the Founders intended. No longer would the Senate be the ‘saucer’ to cool the passions of the immediate majority.”

Now President Biden has completely flip-flopped on the filibuster issue. Biden no longer worries about upsetting “the constitutional design” or cooling “the passions of the immediate majority,” so long as Harris can cast the tie-breaking vote in an evenly divided Senate. He favors an exception to the Senate filibuster rule to enable the passage of the Democrats’ nationalization of voting procedures. The ends justify the means.

The Democrats do not have a mandate to railroad through the Senate such radical legislation. Yet their leaders are following the advice of Democratic Socialist Rep. Alexandria Ocasio-Cortez (D-N.Y.) who urged Democrats to “crack down on the Senate,” which she panned as “an old boys club.”

The Freedom To Vote Act is a blatant attempt by the Democrats to ensure themselves a permanent majority. It would do so, for example, by requiring states to allow no-excuse mail-in voting. The Freedom To Vote Act would ban states from instituting such commonsense precautions as valid proof of identification when a person votes by mail. It would mandate same day voter registration without allowing states to require the kind of identification that notaries, pharmacies, and airport security require. This is a recipe for election fraud. The Freedom To Vote Act would also make vote harvesting legal in all 50 states, allowing anyone – including political operatives – to collect and return ballots for a voter. This is another recipe for election fraud.

The Democrats’ so-called voter “reform” legislation is not really about opening up more access for eligible voters to cast their ballots. It is about rigging the system to enshrine and enforce their unbridled majority rule, contrary to the Founding Fathers’ design of America’s constitutional republic.