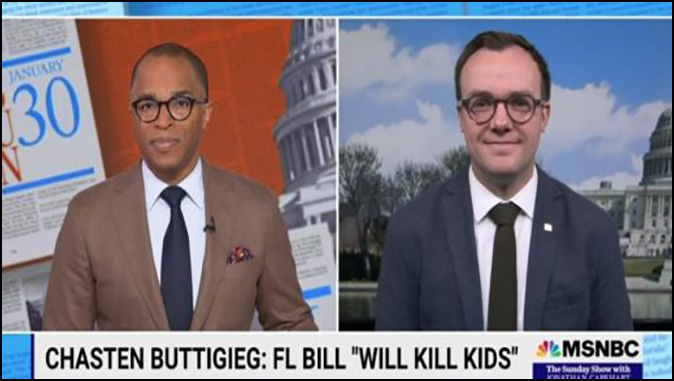 Further proof that they lied comes from sunny Florida where leftists are apoplectic about an important bill (HB 1557) designed to protect parental rights and to curb the use of taxpayer-funded elementary schools for the purposes of promoting leftist beliefs about “sexual orientation” and “gender identity.”

The section of the bill that has President-in-name-only Joe Biden and his snarky mouthpiece Jen Psaki undone is this:

A school district may not encourage classroom discussion about sexual orientation or gender identity in primary grade levels or in a manner that is not age-appropriate or developmentally appropriate for students. (emphasis added)

If Biden’s opposed to it, it’s got to be good.

Biden took time away from his nap to wax foolish about the bill:

I want every member of the LGBTQI+ community — especially the kids who will be impacted by this hateful bill to know that you are loved and accepted just as you are. I have your back, and my Administration will continue to fight for the protections and safety you deserve.

First, let’s go back to basics. What are homosexuality and cross-sex identification? What constitutes those conditions or phenomena?

Do leftists believe that in order to love theologically orthodox kids, they–that is leftists–must affirm all their feelings, beliefs, and actions? What about students who claim their authentic selves are polyamorists, consanginamorists, or kinksters? Do leftists believe safety requires teachers to affirm theologically orthodox Christianity, polyamory, close kin love, or kink? Would it be hateful to prohibit discussions of these identities in elementary schools?

Leftists try to evade such evidence of their hypocrisy by claiming that, unlike homosexuality and transness, that polyamory, consanginamory, and kink are not authentic identities. But who are they to decide what constitutes an authentic identity?

This will kill kids, @RonDeSantisFL. Your are purposefully making your state a harder place for LGBTQ kids to survive in. In a national survey (@TrevorProject), 42% of LGBTQ youth seriously considered attempting suicide last year. Now they can’t talk to their teachers?

Really? Prohibiting discussions of homosexuality and cross-dressing in school “will kill kids”? Where’s his evidence-based, conclusive proof of that outlandish claim?

This is a tacit admission of what conservatives have long been claiming. Leftist teachers are engaging in inappropriate conversations with students on controversial topics that they were not hired to teach and that are far beyond their pay grade. Further, they are often undermining the values, beliefs, and principles that parents are struggling against the cultural tsunami to instill in their children.

A few words about the biased Trevor Project are in order. In addition to the statistic about seriously considering attempting suicide, the Trevor Project reported that,

Leftists want Americans to believe that conservative bigotry and hatred cause the high rates of anxiety, depression, and suicidal ideation among homosexual and “trans” youth, but is that true? Or is it possible that disordered sexual desires are a symptom of other underlying issues?

As conservatism and theologically orthodox Christianity become increasingly hated by American society, do leftists expect the rates of suicidal ideation, anxiety, and depression to rise in those cohorts?

CNN responded to the proposed bill’s reference to age and developmental appropriateness by saying,

It is not clear what would be considered “age” or “developmentally” appropriate.

I can’t remember any leftist or leftist organization expressing that concern when leftists continually assert that anything they want to teach about sexuality, “sexual orientation,” or “gender identity” is “age” and “developmentally appropriate.”

Because leftists claim that everything they want to teach is appropriate, I have repeatedly urged parents to ask their school administration for the criteria used to determine age and developmental appropriateness and to find out exactly who established those criteria.

Jen Psaki made this irony-dripping statement:

Amazing. When parents finally oppose the decisions of leftist teachers to present obscene and sexually graphic material, leftists accuse those parents of trying to “regulate” what students can or cannot read. We can’t have parents objecting to the regulatory actions of leftist teachers, now can we – not even if those teachers are choosing material so obscene it can’t be read at school board meetings or appear in newspapers.

Oddly, the White House didn’t mention the fact that leftist teachers censor material all the time when they choose not to teach resources that dissent from leftist beliefs on sexuality. That’s not censorship, leftists claim, that’s not “regulating what students can and cannot read.” No siree, that’s responsible “text selection” from self-identifying “experts.”

If the White House is deeply concerned about efforts to control what students “can or cannot learn,” the Biden administration might want to look into how often students are asked to study resources that critique “trans”-cultic beliefs and practices or critical race theory.

The award for the most “cynical” use of students as “pawns in political warfare” has to go to Democrats/ “progressives” who have been using school curricula, professional development, and policy for decades to advance arguable leftist beliefs about sex, race, and history. There’s no contest. Republicans are like the girl swimmers at Penn. Democrats are like that cheater and exploiter, the behemoth “Lia” Thomas.

Solomon said her 11-year-old son, Cooper, who identifies as male and has “never wanted to be a girl,” … prefers to wear his school’s girls uniform and enjoys dressing up like a fairytale princess for fun. … “There could be a family just like mine that is going to have to go back in the closet. … They’re going to have to tell their child, ‘I’m sorry, you can dress the way you want to at home, but you have no protections at school, and so you can’t be your authentic self all of the time.’ That’s very damaging to a child.”

That’s quite a loaded hypothetical statement Solomon constructed to explain to a young child why he can’t cross-dress at school. Would a parent have to say, “you have no protections at school, and so you can’t be your authentic self all of the time”?

Is it “very damaging” to a boy to be told that he can’t wear girls’ uniforms or princess gowns to school? Does Solomon have proof for that claim? And how does she define “very damaging”? Does Solomon mean that a child feels frustrated, disappointed, angry, or sad about having their desires thwarted?

Cooper’s mother has been actively supporting his cross-dressing since he was three years old. By the time he was seven, Jennifer was a full-time activist, arranging with schools to read pro-“trans” picture books to young children and to bring in other speakers from the “LGBTQ” community to proselytize children.

Solomon’s opinions raise some questions. Is social transitioning, which includes cross-dressing, good for young children? Conversely, might it be damaging to other children in elementary school to see male peers cross-dressing? Might that be confusing and upsetting to them?

And are the claims of the “trans” cult based on inarguable, objective truths, or are they based on subjective, arguable assumptions?

People like Jennifer Solomon and other opponents of the Florida bill insist on children being allowed to cross-dress at school, use bathrooms and locker rooms with peers of the opposite sex, and play on opposite-sex sports teams. But that’s not all they demand. They also insist that class time and resources be used to promote one set of assumptions on “gender identity,” starting in kindergarten and that all dissenting views be censored because they might make some students feel uncomfortable–er, I mean, “unsafe.”

No, homosexuals, cross-dressers, and their collaborators don’t seek to be left alone or tolerated. They always knew their revolutionary social and political efforts would affect everyone in countless ways. They always were coming for the hearts, minds, and bodies of children. They are nothing if not deceivers and exploiters. A tad more righteous anger about their deception and the harm it’s doing to children, families, schools, and society is in order.