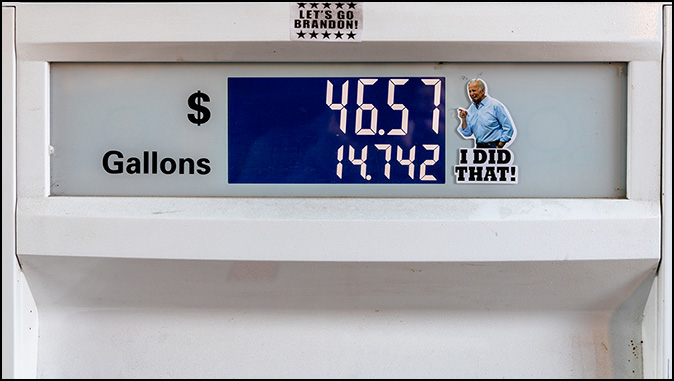 Biden: Americans Will Stomach High Gas Prices “As Long As It Takes”
By Daniel Greenfield

Or until the next administration. Whichever comes sooner.

US President Joe Biden said Americans will have to stomach high gas prices “as long as it takes” to beat back Russian President Vladimir Putin’s invasion of Ukraine.

Gas prices were punishingly high before this war. And they’ll stay that way while…

Russia’s invasion of Ukraine has raised prices, but the Putin’s price hike nonsensical talking point pretends that the only reason we have high prices is because of this war and that Biden couldn’t have done anything differently to change the outcome the tenor of the crisis. Neither one is true.

Biden ran on wrecking the domestic energy industry and replacing it with ‘green’ energy to benefit Dem donors. That’s why working-class people can’t afford to drive.

Team Biden got what it wanted: Daily U.S. oil production dropped from 12.29 million barrels in 2019 to an estimated 11.85 million in 2022, well after demand had rebounded from the pandemic.

If this is about Putin, then it’s not about oil company stock buybacks. And vice versa. Pick a lie and stick with it. But Biden can’t even do that. All he can do is tell Americans to suck it up and suffer.