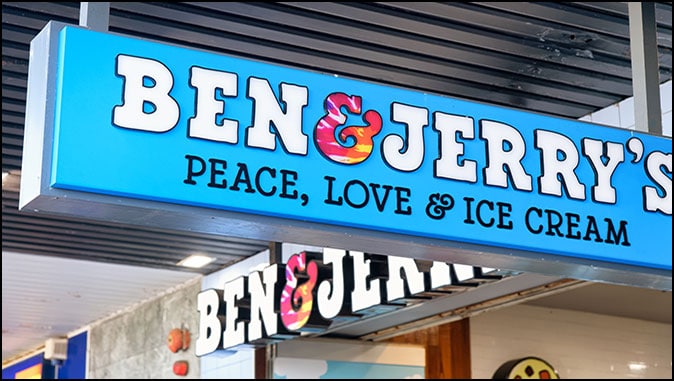 In July, the board of ice cream maker Ben & Jerry’s announced that it would stop selling its brand in what it termed the “Occupied Palestinian Territory,” when its agreement with its Israeli licensee expires next year. Ben & Jerry’s is owned by Unilever but maintains an independent board.

While Israel never formally annexed the West Bank, it did annex East Jerusalem shortly after the Six-Day War. In its statement, Ben & Jerry’s did not elaborate whether its boycott included East Jerusalem. Either way, Ben & Jerry’s decision means that its Israeli licensee will no longer be able to sell Ben & Jerry’s because Israeli law prohibits discrimination against Israeli citizens based on geographical location.

The Boycott, Divestment and Sanctions ideology – more commonly referred to as BDS – is one that is anti-Semitic to its core and is premised on the destruction of Israel from the “River to the Sea.” A common refrain at BDS rallies is “from the River to the Sea, Palestine will be free.” “River” refers to the Jordan River on Israel’s eastern border and “Sea” refers to the Mediterranean on Israel’s west coast.

Ben & Jerry’s full-throated embrace of this anti-Semitic ideology instantly caused a whirlwind of financial and public relations headaches for its parent company, Unilever. On September 7, Arizona’s Treasurer Kimberly Yee announced that Arizona would divest itself of all Arizona Treasury funds from Ben & Jerry’s and Unilever for violating Arizona law by boycotting Israel.

Yee presented Unilever with two choices to come into compliance with Arizona law; either force Ben & Jerry’s to reverse its decision or divest itself from Ben & Jerry’s. The conglomerate balked at both options forcing Yee to announce Arizona’s divestment from Unilever. Arizona will now dump $143 million worth of Unilever investments.

On the heels of Arizona’s decision, the director of the New Jersey Division of Investment wrote a letter to Unilever CEO Alan Jope informing him that Ben & Jerry’s action violated New Jersey’s anti-boycott laws. New Jersey is giving Unilever 90 days to convince its subsidiary to reverse its boycott decision. If Unilever fails to comply, New Jersey will divest itself of its Unilever holdings in its state pension funds, which currently total around $90 billion.

In addition to Arizona and New Jersey, the states of Florida, Texas, New York, Illinois, Maryland and Rhode Island are in the process of taking similar action against Ben & Jerry’s and Unilever. All have launched formal investigations to determine if their states’ anti-boycott laws were violated.

Unilever is facing a potential tsunami of counter boycott actions which will adversely impact the company’s bottom line. At least 33 states have instituted anti-BDS laws, either by legislation or by executive order, that require states to act if those laws are violated. This can take the form of divestment from state pension funds or cancelation of contracts or both. Twenty-one of those states specifically include territories administered by Israel but not formally annexed by her.

This is not the first time that Ben & Jerry’s has been embroiled in controversy. The Vermont-based, “woke” company has embraced extremist causes in the name of progressivism. In 2018, the company was forced to issue a statement condemning anti-Semitism following revelations about its association with notorious anti-Semites Tamika Mallory and Linda Sarsour. Both expressed admiration for Nation of Islam leader Louis Farrakhan. Sarsour has also championed a terrorist operative convicted of murder of Jews.

In addition, Ben & Jerry’s board chairperson, Anuradha Mittal, has a long history of anti-Israel activism. In 2006, she expressed concern that the US would cut funding to Gaza following an electoral win by Hamas. She argued that the US should rely on the terrorist organization’s assurances that humanitarian aid would not be pilfered by the group. In 2007 Hamas violently suppressed all dissent in Gaza and killed, arrested or forced into exile hundreds of opposition operatives. Mittal also published an article that expressed support for Hezbollah. Both Hezbollah and Hamas are listed as Foreign Terrorist Organizations by the United States. Finally, in 2019 she tweeted support for Ilhan Omar after the congresswoman perpetuated her now infamous dual loyalty canard.

Mittal has denied being anti-Semitic, but facts do not lie. When piecing together Mittal’s social media profile, publications and associations with various anti-Israel causes, a clearer more sinister portrait emerges. As for Unilever, the prospect of being the target of investigations and divestment by at least 33 states, not to mention the negative publicity generated by allegations of antisemitism, may convince the conglomerate that retention of Ben & Jerry’s in its corporate structure is simply not worth the headache.