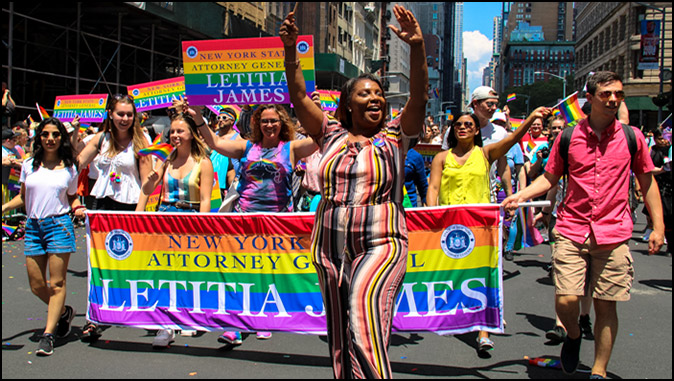 New York State Attorney General Letitia James, on whose watch crime has monumentally increased, celebrated her latest grift in going after a political opponent, former president Donald J. Trump, in the hopes that this will pour money into her campaign war chest and help one day make her governor. This follows other political prosecutions targeting the NRA.

In the years since crime, especially violent crime, has skyrocketed. New York State’s Democrat majority, led by Cuomo and Hochul, have implemented pro-crime measures that have stripped away public safety, emptied the prisons and filled the streets with criminals.

Random violence by the mentally ill, junkies or thugs is routine. And it is equally routine for the thugs in question to be set loose a few hours later to strike again.

Like the rest of the corrupt criminal organization that runs the state, James has endorsed “decriminalization” for criminals, while criminalizing political opponents. On her watch, New York’s justice system has been transformed into a machine for enabling violent criminal attacks on ordinary people while suppressing political disagreement and dissent.

The wealthy donors financing this corrupt arrangement are thrilled even as the state burns.

In response to rising crime, James pontificated that, “We are resisting the urge to overreact to spikes in crime that have occurred during this pandemic”.

Or react at all.