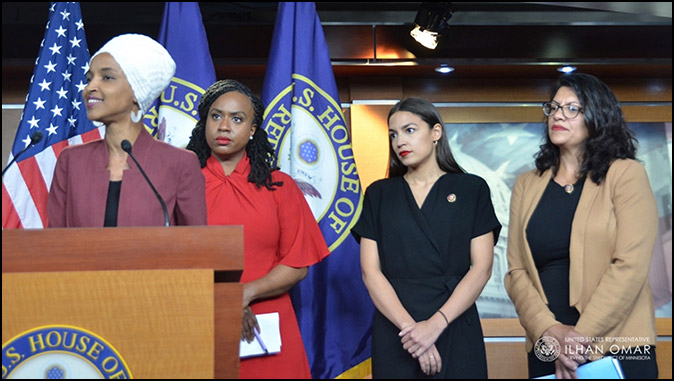 As Women in Iran Are Shot Down While Fighting for Their Rights, the Squad Has Little to Say
The ultimate betrayal.
By Robert Spencer

What’s happening in Iran is the biggest women’s rights protest ever in the Islamic world. Yet the response from some of the leading feminists in the United States, Alexandria Ocasio-Cortez, Ilhan Omar, and Rashida Tlaib, has been strikingly muted. Each one has made what can be characterized at best as a tepid, pro forma response, one that contrasts sharply with their statements and actions during the Trump administration. It looks as if each one of these women regards Donald Trump as a far greater threat to women than the Islamic Republic of Iran is.

AOC tweeted on September 23: “Solidarity with the courageous women and allies in Iran protesting for their freedom. Mahsa Amini was senselessly murdered by the same patriarchal and autocratic forces repressing women the world over. The right to choose belongs to us all, from hijabs to reproductive care.” She also retweeted a tweet from Yassmin Abdel-Magid, a hijab-wearing Muslim writer in Australia: “To be (hijabi) or not be (hijabi) is the business of no state or man. Solidarity with women resisting patriarchal control, the world over.” Tlaib, meanwhile, retweeted AOC’s statement, and Omar retweeted Abdel-Magid’s. That’s it in terms of the public reactions of this trio to the uprising for women’s rights in Iran.

Neither AOC nor Abdel-Magid was going to come close to saying something about Islamic law, although that’s exactly what the protests in Iran are all about: women there don’t want to live under Islamic law anymore. But both are far too committed to the fictional concept of “Islamophobia,” and so they both made it all about patriarchy. That’s a much safer target for them, as patriarchy exists all over, not just in Iran, and not just among Muslims. So the very publicly practicing Muslims Omar and Tlaib could retweet their statements without fearing that they would be accused of criticizing Islam.

AOC also went farther, equating the mullahs of Tehran with the pro-lifers in the United States. They’re “the same patriarchal and autocratic forces repressing women the world over,” daring to interfere with “the right to choose” in the fields of both “hijabs” and “reproductive care.” It’s a spectacular feat of illogic to equate a regime that is mowing down its own people in the streets with a Supreme Court decision that allows the individual states to determine whether to legalize or outlaw abortion, but that sort of incendiary rhetoric is how AOC keeps her rabid Left base ginned up with the requisite outrage that will drive these drug-addled slackers to the polls and to take other “social action.”

Yet AOC’s comparison, as you would expect, falls apart upon a moment’s thought. Pro-lifers, or at least the Supreme Court Justices who voted to overturn Roe v. Wade, are just like the Supreme Leader and his cohorts in the Islamic Republic. They’re both “patriarchal and autocratic forces,” you see. But from what ideological wellsprings does Iran’s patriarchal autocracy spring? AOC doesn’t dare get close to that question, for it is one of her most cherished dogmas that Islam is a religion of peace that has nothing whatsoever to do with terrorism and Muslims are victims of “Islamophobia” who must accordingly be given special consideration and accommodation. And allowing restrictions on access to abortion in some localities is, as far as AOC is concerned, equivalent to shooting women to death for daring to uncover their heads? The mind reels.

This is the same Alexandria Ocasio-Cortez who in October 2020 took umbrage at then-President Trump referring to her as AOC in one of his debates with Old Joe Biden. “I wonder,” she wrote at the time, “if Republicans understand how much they advertise their disrespect of women in debates when they consistently call women members of Congress by nicknames or first names while using titles & last names when referring to men of = stature. Women notice. It conveys a lot. AOC is a name given to me by [the] community & the people. Y’all can call me AOC.”

So the “community & the people,” i.e., Leftists, can call her AOC, but if Republicans do so, they “advertise their disrespect of women.” AOC didn’t even say that the mullahs were displaying any “disrespect of women.” You may recall Tlaib, meanwhile, back in 2016 screaming and yelling at a Trump rally, until she had to be escorted out. Has she ever gotten so enraged and emotional at the mullahs? Not publicly and likely not privately, either. For her part, Ilhan Omar claimed that Trump’s criticism of her was an attack on all women. Has she said that the murder of Mahsa Amini was an attack on all women? No.

Do Omar, Tlaib, and AOC just want the Iran protests to go away because Iran’s repressive and bloodthirsty regime interferes with their “Islamophobia” narrative? Sure looks like it.