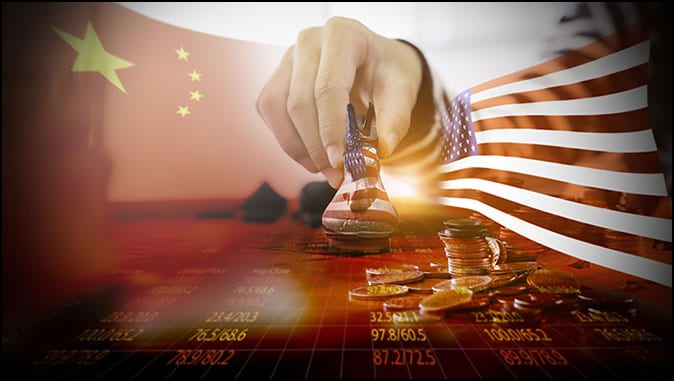 As Trump Predicted, Under Biden China Owns the United States
What that means for America’s patriotic movement.
By Lloyd Billingsley

On February 11, Joe Biden announced sanctions on Burma for a recent coup in that nation, also known as Myanmar. “The military must relinquish power they’ve seized and demonstrate respect for the will of the people of Burma as expressed in their November 8 election,” Biden said. For the current occupant of the White House, first elected to the U.S. Senate in 1972, that was something of a departure.

During a political career of nearly 50 years, it’s hard to find the Delaware Democrat urging China’s ruling Communist Party to respect the will of the people and hold free elections. As they made clear at Tiananmen square in 1989, the people of China want freedom, democracy, and human rights. The Communist regime deployed massive military force against the people, but for Joe Biden that proved no object to China’s admission to the World Trade Organization.

As the Black Book of Communism and other studies confirm, China’s Communist regime has murdered scores of millions, but American politicians demanded no accounting, or punishment of those responsible, as a condition of WTO admission and trade privileges. Neither did they require free multi-party elections, or self-determination for Tibet, as a condition of joining the WTO.

Access to the American market was supposed to make China more peaceful, but the regime became more repressive and expansionist. On the other hand, American politicians made plenty of money. Prominent among them is Sen. Dianne Feinstein, a regular guest of the PRC since the 1970s and a staunch advocate for China’s most favored nation status.

As Glenn Bunting of the Los Angeles Times reported in 1997, Feinstein’s husband Richard Blum “has expanded his private business interests in China – to the point that his firm is now a prominent investor inside the communist nation.” In 1995, Dianne Feinstein became a member of the Senate Foreign Relations Committee, “giving her a prominent platform for her efforts to support China’s trade privileges.”

As Ben Weingarten noted in the Federalist in 2018, Feinstein’s husband has “profited handsomely from the greatly expanded China trade she supported.” The senator also “served as a key intermediary between China and the U.S. government, while serving on committees whose work would be of keen interest to the PRC.”

For 20 years, through three election cycles, Feinstein maintained on her staff a Chinese spy who would even attend consular functions for the California Democrat. One wonders what the FBI knew, when they knew it, and what they did about it, if anything.

Other politicians with China business connections include Mitch McConnell and Nancy Pelosi, whose husband has conducted a series of deals in the Communist nation. Recall that Speaker Pelosi kept Eric Swalwell on the House Intelligence Committee even after his “PoonFang” liaisons with a Chinese spy.

The PRC’s biggest American asset is surely Joe Biden. He acquired the China beat in 2012 on the recommendation of National Security Advisor Tom Donilon, a failed Fannie Mae lobbyist and behind-the-scenes operator for the “composite character” David Garrow described in Rising Star: The Making of Barack Obama.

Biden routed the China trade through son Hunter, a frequent flyer on Air Force Two. Hunter’s laptop was the equivalent of Hillary Clinton’s private server, enabling the vice president to avoid scrutiny. The FBI had Hunter’s laptop but by all indications FBI bosses believed that, as Comey said of Hillary Clinton, no reasonable prosecutor would bring charges against Joe Biden’s son, especially with the “Big Guy” running for president. The New York Post broke the story, but the Democrat-media-tech axis promptly banned the October surprise.

Joe Biden is also on record that the Chinese Communists are “not bad folks,” and “not competition for us.” So no surprise that Biden turns a blind eye to China’s repressions and beats up on Burma, a nation that poses no threat to the United States. In effect, Joe Biden serves as governor general of Americachukuo, China’s North American economic zone.

With Biden in the White House, President Trump predicted, China would “own the United States.” There’s also something to Trump’s charge that the Bidens are an “organized crime family.”

In December, Joe Biden claimed nobody in his family would be involved in any business that even appears in conflict with the presidency and the government. As Miranda Devine of the New York Post reports, it turns out that Hunter Biden still holds a 10 percent share of the Chinese firm BHR partners and is thus “still in business with the Chinese Communist Party.”

The performance of Joe “America Last” Biden and China-compliant Democrats brings clarity to the patriotic movement now in place and growing. At least 74 million patriots are part of an independence movement that seeks to preserve rights under the U.S. Constitution.

Those rights are now at risk, as the Democrat demolition squad seeks to erase the nation’s history. To adapt Milan Kundera, the struggle of the patriotic movement against the America-Last regime is the struggle of memory against forgetting.