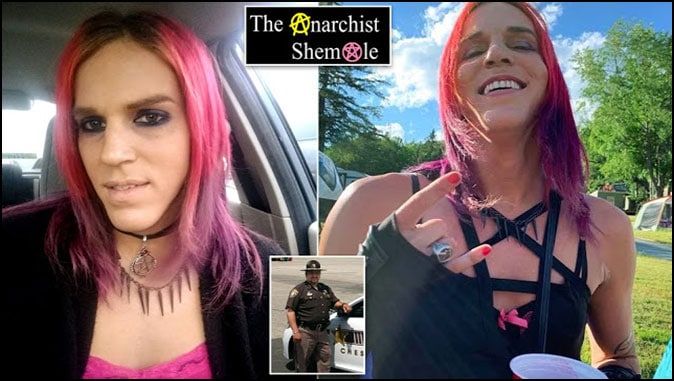 A transgender man who describes himself as female and a “Satanic anarchist” has won the Republican Party nomination for sheriff in a New Hampshire county after running on a platform of “F*** the police.”

“I can’t imagine they’re happy about this,” Aria DiMezzo told when asked about the reaction from Republicans.

The head of the Cheshire County Republican Party, Marylin Huston, referred to DiMezzo as “he” when she offered congratulations. “He did very well with the primary and that was wonderful,” Huston said.

Technically, Huston was not wrong, because DiMezzo is a man who identifies as a woman. But he does not like when people identify him correctly by his biological sex.

So if DiMezzo reads that I am treating him according to his male biology, he can sue me for “discrimination.”

Transsexuals are exempt from the U.N. wrath against men and their leadership, because male transsexuals identify as female and are entitled to privileges the U.N. grants to feminists.

So will all men have to identify as female to deserve to occupy leadership jobs in the “perfect” society envisioned by the United Nations?

DiMezzo is the host of an internet radio show in which he is known as “She-Male.”

DiMezzo favors ending prosecution of drug crimes, sex work, illegal immigration, and other “victimless” crimes. “There’s tons of things people get fined for, arrested for, that don’t actually have any victims,” said he.

He said he is more liberal in many ways when compared to her Democratic opponent, Eli Rivera.

“I’m more liberal than he is,” DiMezzo said.

Most Republicans did not support him. His candidacy was just tolerated by the Republican Party.

DiMezzo also identifies as a “high priestess” of the Reformed Satanic Church, which describes itself as “an organization dedicated to the sovereignty of the individual, and to the principle of non-aggression.” It is not rare for a homosexual to be a member of a Satanist group as Satanism embraces homosexuality as normal.

Unlike the Church of Satan, the Reformed Satanic Church doesn’t define itself as a religion.

“We are an anti-religion,” the organization’s website claims, adding:

“Lucifer is not our god nor our king. Lucifer is our example. As he refused to obey the arbitrary edicts of an authority, so shall we. Morality is determined by conscience, not by hierarchical ranking of a decree.”

For a male Satanist, there would be no problem for him to identify as a female to occupy leadership posts in the “perfect” society of the United Nations. Actually, only a Satanist or a misled individual could accept such “perfect” society. But for real Christians, there would be many problems, because God, who is male and leader, has not called women and fake women to be sheriffs or occupy any other military and police leadership post. He chose men. But try to convince Satanists about it.