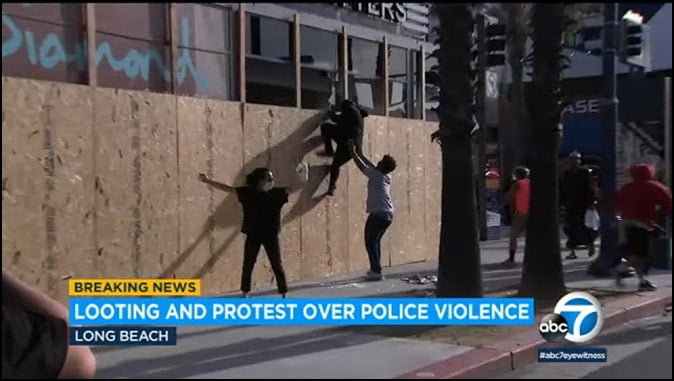 Another Night in Lootopia
By Daniel Greenfield

Race riots usually begin with criminality and end with criminality. They’re protests by criminals on behalf of a dead criminal. The stores with smashed windows aren’t a means of expressing outrage, but the end. The purpose of criminality is criminality. The police exist so that stores can remain unrobbed and random pedestrians can remain unbeaten. The protests express opposition to that policy by robbing stores and assaulting random people. Riots and looting are not a distraction from the protests. They are the essential point of the protests and the radical movement that they represent.

The police were never the problem. The looters and rioters were.

The riots drawn in the disaffected upper middle class ideological white and black youth and lower class non-ideological black youth. Neither the middle class leftist nor the lower-class rioter is invested in his society. The former are globalists, and the latter are outsiders.

Neither are invested in the city and country they are busy trashing.

They are the children and parents of the welfare state with little in common except that neither are invested in the city and country that they are busy trashing. Neither have any interest in working. The businesses they smash are an alien thing to them. Small businessmen do not go about smashing stores. The people who do think of commodities as something they trick or intimidate others into giving to them. And that covers everyone from environmental non-profits to sneakers and BMWs.

“Loot as much as you can, or someone else will.” If you don’t grab government benefits or sneakers in store windows, someone else will. The rich are grabbing, the pols are grabbing– time to queue up and loot your share. Communism made this way of thinking so commonplace that all of Russia became one black market. And we are not far behind.

What kind of people behave this way? Those who have come to think of wealth as an infinite pile from which everyone grabs as much as they can. This is where the ethos of the socialist left and hip-hop comes together. Money is magical. Hard work is a scam that those who have it invented to oppress everyone else. Property is theft, so why not reverse the equation and steal what you can?

The classic raid has come to the cities of West, its hallmarks are not frustration but careful planning, followed by a violent rush. They are the reemergence of an old way of life that most people think died with the Vikings. Technological savvy melded with barbaric behavior, the 21st century mobile devotee turned raider is a wake up call in more ways than one. These are not mere race riots, they are the self-organization of the end of our civilization.

The law banished the raider back into the dim pages of history, but law depended on a civilization which is now collapsing. Police officers need the support of the public to hold the line. And when the left along elements of the right, advocate for criminals, the criminals will make cities their own.

The traditional raider saw himself as part of an outside group. The modern raider has global or tribal identities that are at odds with the country he lives in. When he joins a raiding party, it is as a member of one of those groups looting a society whose welfare is of no interest to him. A disregard for the civilization becomes a disregard for its laws. And that leaves self-interest as the only hedge against anarchy. But what interest do people who do not work for a living have in preserving the businesses of others? None at all. As far as they are concerned, smash a store, it will collect the insurance, and reopen, or another will open up in its place. And even if it doesn’t, then so what?

The raider lives in a magical world free from the constrains of economics or morality. And the raiders know that the more they smash and loot, the more concessions they will win from those who still believe in the economic and moral precepts that once governed our society. Attitude matters more than work ethic. Having the right politics matters more than getting up in the morning.

As looters clean out those who work, the culture of the looter and the raider spreads leaving blight, malaise, and parasitism in its wake. Riots decimate a society’s moral immune system leaving behind a carcass of burned out and smashed up businesses, some of which will never rise again.

But to the raiders, there will always be more. In a world full of victims, there is always more to loot.

The essential raider protest is of a world in which hard work is required and looting is banned. When a criminal dies, it’s a trigger for the elemental protest against this unfair world with more criminality. The world that the criminals, ideological and non-ideological, seek is one of infinite looting, where the work ethic is useless, and morality is stomped on, and their whims and egos will rule the day.

Marxism and criminality are two sides of the same coin. They’re the first resort of worthless people who are motivated by envy, held back by laziness, and have no moral center. It is no coincidence that the former leads to the latter, and the latter to the former. Or that criminals and Marxists will work together to watch other people’s hard work burn.

MassResistance statement to our supporters: What should we all do now?

MassResistance statement to our supporters: What should we all do now? January 15, 2021 The…

The Conservative Purge Won’t Stop With Big Tech A great darkness sweeps across the world.…

Twitter's Permanent Ban of Trump Why do Hillary Clinton, Jimmy Carter and Harry Reid get…

Does Telling Muslims to ‘Behave’ Prompt Hatred and Terror?

Does Telling Muslims to ‘Behave’ Prompt Hatred and Terror? A look at assertiveness vs. appeasement.…

The Capitol Hill Riot Was Pelosi’s Fault, Not Trump’s

You Can’t Put This Killer to Death. He Has COVID

You Can't Put This Killer to Death. He Has COVID By Daniel Greenfield Since most…