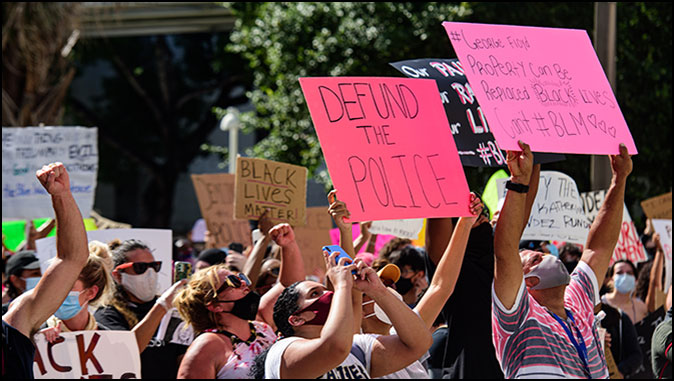 America Has a Democrat Problem
That’s why America has a crime problem.
By Don Feder

What do New York City, Washington, D.C., Chicago, Minneapolis, Seattle, Portland and Los Angeles have in common? Soaring crime rates, shrinking police budgets, revolving-door criminal justice, BLM/Antifa riots last year – and Democrat mayors. Not just Democrats, but among the wokest of the woke their party has to offer.

Our largest cities – and the federal government – are under the control of adherents to an insane ideology which holds that defunding the police will make us safer, that criminals are misunderstood and that the trigger pulls the finger.

Bill De Blasio, Muriel Bowser, Lori Lightfoot, Jenny Durkan, Ted Wheeler – Nancy Pelosi, AOC and Joe Biden’s handlers – have sown the wind and left it for us to reap the super storm which is ravaging the country from coast to coast.

– In New York City (where a woman was sexually assaulted and almost raped on a sidewalk in broad daylight last week) sexual offenses are up 25% since the beginning of 2021. Shooting incidents are up 74%.

– In Portland, Oregon, where the BLM/ANTIFA riots lasted for months and the mayor became a cheerleader for anarchy, the murder rate increased (no, this is not a typo) 533%.

– In Chicago, over the 4th. of July weekend (Friday through Monday noon), 82 were shot and 14 died. Over 1,500 have been shot in the Windy City (so named for its blowhard politicians) to date, surpassing last year’s total-to-date by 12%. Mayor Lightweight blamed COVID-19 and “lax gun laws” in surrounding jurisdictions for the endless upsurge. She forgot global warming and systemic racism.

– The FBI says the past 12-months have seen “the largest single year increase” in the murder rate since the agency began publishing uniform data in 1960.

If the Democrat Party had deliberately concocted a scheme to cause crime rates to spiral, it couldn’t have done a better job. The key components in their pro-crime program include:

2. Smearing the police – The police are racist killers, the Democrats and their media minions told us. Police retirements went way up, recruitment went way down. It’s not enough for a man or woman in blue to risk their lives every time they pin on a badge, they have to be insulted for it too. Lefties have also created the climate where attacks on officers are far more likely.

3. Defunding the police – From New York to L.A., police budgets were slashed — $1 billion in the Big Apple. (Some of it’s been quietly restored, in desperation.) Say another pandemic hits. What do you do: make radical cuts in funding for hospitals and community clinics? Do everything possible to make the public fear and hate physicians and other health care providers? That’s what Democrats are doing with crime.

4. Open borders – In another case of misguided compassion (or perhaps political opportunism), the new administration decided to simply stop trying to control the border. In May, 150,000 illegal aliens were arrested at the southern border, compared to 23,000 in May of 2020. (For every arrest, several escape capture.) Our unwelcome guests aren’t just unaccompanied minors, but gang members, drug dealers and others likely to rob, rape and murder. Drugs like fentanyl are also coming in at a record rate (more seized by CBP as of April than in all of 2020) to kill Americans and increase the craziness in the streets. (St. George of Floyd had it in his system at the time of his fatal encounter.)

5. Turnstile justice – Woke prosecutors, many elected with support from Soros’ PACS, are eliminating bail and putting hardened criminals back on the streets as fast as they can. An effort is underway to recall Los Angeles Co. D.A. George Gascon, the violent felons’ sugar daddy. His “reforms” would make 20,000 inmates eligible for resentencing.

6. Putting AOC and the Squad in charge of law enforcement policy – The anorexic fashion model from the House of Marx and Lenin bids us to “reimagine law enforcement.” She wouldn’t spend another cent building prisons and put inmates instead in halfway houses. The Democrat establishment is so terrified of the Jacobins that it will give them whatever they want, if they demand it loudly enough.

Once upon a time, law enforcement was bipartisan. That began to change in the early 1970s. But as late as 1994, then-Senator Joe Biden authored a lock-em-up anti-crime bill.

Now his party has all but officially decided that cops are pigs, policing is racist, criminals (including those who commit triple homicides) are misunderstood, keeping guns from law-abiding citizens is the key to crime control and – in the words of those great criminologists the Beatles – All you really need is love.

In an ABC News/Washington Post poll released on July 2, by 48% to 38%, the public disapproves of Captain Dementia’s handling of crime, 59% say it’s an “extremely serious” or “very serious” problem and 55% want to increase police funding.

The most effective anti-crime program imaginable can be summed up in five words – Get Democrats out of office. Your life might depend on it.