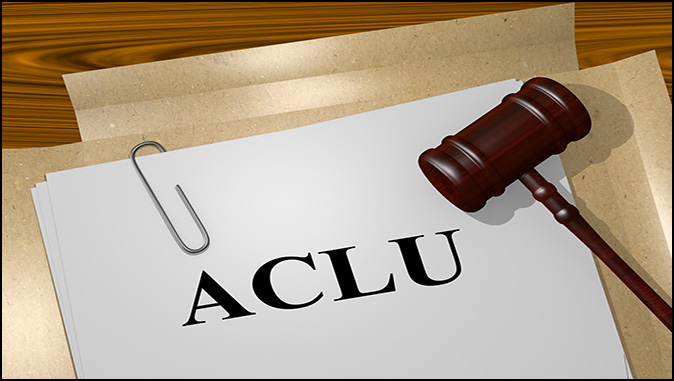 ACLU Files Motion Denying Existence of Women
The War on Women is real.
By Daniel Greenfield

The ACLU claims that there’s a War on Women…and it’s fighting it.

“We’re Not Stupid: Outrageous Quotes from the War on Women,” the ACLU had headlined a post about its pro-abortion activism in 2013.

A decade later the ACLU is arguing in court that women don’t exist.

Not only does the ACLU’s current abortion coverage eliminate any mention of women, but in response to a civil rights lawsuit by women, it actually filed a motion arguing they don’t exist.

Last year, the Women’s Liberation Front, one of the few remaining feminist groups that have rejected transgender intersectionality’s displacement of women, filed a lawsuit against California’s prison system over housing men who claim to identify as female together with women.

The feminist groups filing the lawsuit noted that, “of the incarcerated men seeking to transfer to women’s prison 33.8% — FULLY ONE THIRD — are registered sex offenders.”

Krystal Gonzalez, one of four women being represented in the lawsuit, reported being sexually assaulted by a man who claimed to be “transgender” in prison. The California penal system however insisted that her male attacker was actually a “transgender woman with a penis.”

The ACLU, along with Lambda Legal and the Transgender Law Center, filed a bizarre motion in response denying that, “‘men as a class’ are defined and differentiated from ‘women as a class’ by their ‘anatomy, genitalia, physical characteristics, and physiology.’”

Are there physiological differences between men and women? Science says there are while the ACLU denies it in what may be one of the most surreal motions ever submitted to a court.

Denying sexual dimorphism is up there with a motion claiming that the earth is flat.

But the ACLU motion went on “to deny the allegation that ‘human beings’ are ‘sexually dimorphic, divided into males and females each with reproductive systems, hormones, and chromosomes that result in significant differences between men[] and women[.]’”

Biology 101 is now an “allegation” to be denied in court.

Maybe the ACLU’s next motion will deny the “allegation” that the earth revolves around the sun.

The civil rights lawsuit the ACLU is fighting uses textbook terminology. Literally. The language of a basic biology textbook is being denied by a former civil rights group fighting against a civil rights suit by a sexual assault victim. The ACLU now hates science, women, and civil rights.

Not to mention free speech.

Within a decade the ACLU has gone from falsely accusing Republicans of a “War on Women” to waging an actual war on women in court. The ACLU has also switched from claiming that Republicans were tolerating sexual assaults on women to fighting women in court so that male sex offenders can continue to sexually assault them. That’s what a War on Women looks like.

It’s hard to know whether this is worse than the ACLU also throwing out freedom of speech.

Even while the ACLU files motions denying the existence of women in court, it still maintains the ACLU Women’s Rights Project that was founded by Justice Ruth Bader Ginsburg.

The ACLU denies that women are a class when filing a motion against a lawsuit by a woman who was sexually assaulted, and then argues that they are a class in employment law.

Women are apparently still a class when they’re being paid less than men, but they’re not a class when a man wearing a dress wants to sexually assault them in the prison system.

Even while the ACLU fundraises off defending women, it denies they exist. Its legal advocacy has begun to shift away from mentioning pregnant women to referring to “pregnant people”.

The ACLU promises to advocate for women while erasing them in court.

The former civil rights group accuses abortion opponents of supporting “forced pregnancy”, but women in prison have become pregnant while it insists on forcing them to live alongside male rapists. The actual agenda of the ACLU is even worse than its wildest accusations that it and its radical leftists allies have been hurling for decades at social conservatives.

In Washington, the ACLU went to court to stop the release of documents about the transfer of male prisoners, including a serial rapist, into the Washington Correctional Center for Women.

The men included Douglas “Donna” Perry, a serial killer who violently hated women, was charged with murdering three prostitutes and may have killed between nine and twenty women.

Douglas Perry explained that he killed women because he “couldn’t breed” and the “women had the ability to have children”.

A family member of one of his murder victims had specifically asked that Douglas be kept out of a women’s prison so he would not be able to hurt any more women.

But in California’s progressive jurisprudence, only the rights of criminals matter to the Left.

The ACLU’s male attorney went so far in that case as to file an injunction against the woman requesting information about the number of men being housed in women’s correctional facilities.

“The War on Women 2.0: Do They Think We’re Stupid?” the ACLU headlined its arguments a decade ago. The ACLU is waging a War on Women 2.0 and it thinks its supporters are stupid.

In the name of diversity, equity and inclusion, the ACLU wants to force women to live alongside a male serial killer who piled up their naked corpses near the Spokane River.

Douglas Perry was caught because a cold case investigation allowed a “forensic scientist… to be able to develop a male DNA profile from blood” found under one of the victim’s fingernails.

Perry is still a man. He was caught because of a male DNA profile. That’s actual science.

But how long will it be until the ACLU argues that DNA evidence can’t be used to stop serial killers like Perry because he now identifies as a woman and therefore he can’t be the suspect.

Perry’s defense for the murder of those women was, “I’m not going to admit I killed anybody, I didn’t. Donna has killed nobody.” When he was asked if “Doug did”, he answered, “I don’t know if Doug did or not, it was 20 years ago and I have no idea whether he did or did not.”

What used to be insanity a mere eight years ago is now the official position of the establishment.

In an extraordinary document, the ACLU denies everything we know about biological science and it does so in the name of not only erasing women, but exposing them to sexual abuse.

The ACLU claims to be fighting to protect women even as it’s forcing them to share a space with serial killers, rapists and sex offenders. What else would you call that except a War on Women?