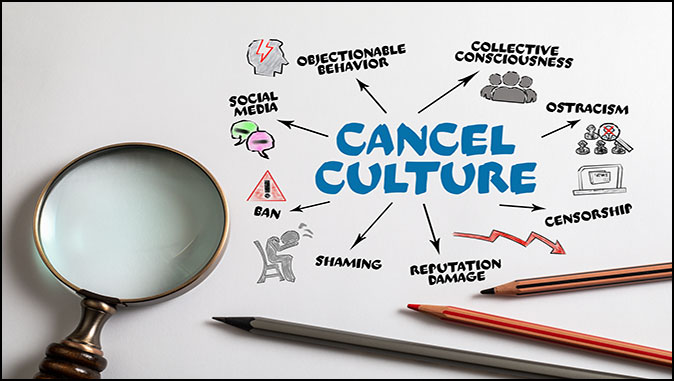 A Lenten Meditation on Cancel Culture
By Dr. Jerry Newcombe

Every day seems to bring new examples in the news of our cancel culture. Cancel culture is a cancer to our culture.

The examples border on the ridiculous:

And on it goes. And these are but mild examples.

I’m all for being sensitive and trying not to needlessly offend anybody. But the problem now is that feigning offense bestows cultural power, so no amount of sensitivity is enough. Inasmuch as any of this deals with race, Dr. Martin Luther King, Jr. gave the perfect remedy – judge others by the content of their character and not the color of their skin.

But today cancel culture has almost become a joke – only it is not funny. As Tucker Carlson noted recently, one of the great victims of cancel culture is humor.

Above all, cancel culture lacks grace – God’s amazing grace. Lent is the 40 days (Sundays not counted) between Ash Wednesday when we remember that we were made of dust and to dust, we shall one day return, and Easter Sunday when Jesus rose from the dead.

Lent is 40 days because when Jesus began His ministry, He fasted for 40 days in the wilderness, where He was tempted by the devil. But He did not give in.

Christ lived a perfect life and was the only human being to ever do so. He (who was fully God and fully man) then voluntarily offered Himself as a sacrifice for sins on the cross and offers forgiveness for those who believe.

Somehow the woke folk see themselves as perfect. They remind me of a 250-year-old dialogue between General Oglethorpe (founder of the American colony of Georgia) and the preacher John Wesley (founder of the Methodist Church).

Responded Wesley: “Then, Sir, I hope you never sin.”

Thankfully, even some on the left recognize that cancel culture is no good for the culture. As even Bill Maher noted recently, the left should stop with the cancel culture, lest it come back to cancel the left one day.

Alan Dershowitz, Harvard Law professor emeritus, said, “I hope all Americans wake up to this…I hope it’s not just the ‘shoe is on the other foot’ test. Now, the conservatives are the victims of cancel culture so they’re big supporters of the Constitution and constitutional rights. During McCarthyism, it was the left that were the victims, and the right were the oppressors.”

The Epoch Times noted (3/5/21): “’Americans are showing increased and substantial concern about the growth of cancel culture,’ said Mark Penn, the director of the Harvard CAPS-Harris Poll survey.”

Well, we should. Dr. Peter Lillback founded the Providence Forum and serves as its president emeritus. I once interviewed him about the Christian origins of our freedom as Americans. He said we should learn from William Penn, the founder of Pennsylvania. In the late 1600s, Penn created a large colony where people could be free to practice their religion as they saw fit. It was a “holy experiment.” Conscience rights of the individual were to be respected.

Lillback told me in reference to Penn, “When he defended the freedom of conscience, he wrote a great book on it. He put on its cover Matthew, chapter seven, and verse twelve. Not everyone knows that reference, but it’s the Golden Rule, ‘do unto others as you’d have them do unto you.’” (The words of Jesus from Matthew’s Gospel.)

Lillback notes, “Basically, what he was saying is: I didn’t like it when I was put in the Tower of London for my conscience. Now that I’m building my own civilization, I’m not going to put you in prison because you disagree with my Quaker faith.’ He said, ‘The freedom we want for ourselves we must give to others.’” Amen.

Cancel culture eats away at all these things, throwing forgiveness out the window in the process. Cancel culture is reminiscent of those ancient statues of snakes in the process of eating themselves in a circle. It would be best for all of us for this cancer in our culture to be uprooted and replaced by Christian liberty, grace, and true tolerance.