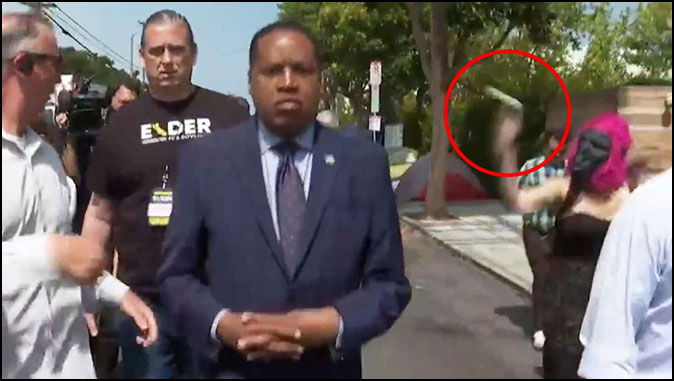 A Hate Crime Against Larry Elder Isn’t ‘Racist’
It’s not a hate crime when you have a monopoly on hate.
By Daniel Greenfield

Last year, a white woman walking her dog called the police during a confrontation with a black birdwatcher in Central Park. She lost her job, her dog, and her future after the media launched a cancel culture campaign to accuse her, without evidence, of racism.

Now, a white woman wearing a gorilla mask taunted and threw an egg at gubernatorial candidate and talk show host Larry Elder. Unlike the white woman in Central Park, we will probably never learn her name. The media has displayed a cool disinterest in the incident, let alone in the details, and won’t dispatch its doxxing squads after this blatantly racist attack.

Even if the gorilla lady turns up, don’t expect her to be fired or to lose her career over it.

Gorilla lady won’t be called a “Karen,” won’t trend on Twitter, won’t be the subject of New York Times and Washington Post articles, and won’t result in a single Democrat official even being asked to condemn an incident which, if the shoe were on the other foot, would be everywhere.

Had a white woman in a gorilla mask thrown an egg at Barack Obama, the photo would be hanging in the Smithsonian and the story would be taught in schools. There would be a movie made about it and it would always come up as emblematic of Republican opposition to Obama.

The DOJ, which swarmed when a rodeo clown wore an Obama mask and a parade float featured Obama in an outhouse, won’t be sending in its community relations agitators.

The FBI will be busy investigating a string of ropes someone once again mistook for a noose.

After a year of racial reckonings in which fifteen FBI Special Agents were dispatched to investigate a pull rope that had been mistaken for a noose in a garage used by Bubba Wallace, the NYPD and Rep. Jamaal Bowman tackled a pinata rope mistaken for a noose in the Bronx, and people were charged with felonies for driving over Black Lives Matter letters on streets, you can bet that the FBI and local authorities will show as little interest in the case as possible.

After investigating every single suspicious rope from a Florida racetrack to Johns Hopkins University to an Amazon facility in Connecticut, the FBI will be too busy to investigate an actual racist assault on a black political candidate that was caught on camera in broad daylight.

Give the FBI a rope and it’ll dispatch a dozen of its best and brightest to hang a noose on it, but when a Bernie Sanders supporters with a hit list of Republicans opens fire on House Republicans at a baseball game, the FBI will claim that it was a suicide attempt. Even though the only actual suicide there was being committed by the FBI’s last shred of credibility.

Over the long summer of our riotous racial reckoning, every white woman who called the police or objected to some behavior by a black person, no matter how threatening or obnoxious, was immediately slurred as a “Karen”, and became a Twitter trending topic whose aim was to ruin as much of her life as could be managed by a $4 billion company and its social justice user base.

But a white woman can still put on a gorilla mask and attack a black man as long as he’s conservative. Over the past year, the media found the race of the person involved in a confrontation with a black person vitally important if that race happened to be white.

“The California recall race heated up Wednesday when a protester wearing a gorilla mask threw an egg at Republican gubernatorial candidate Larry Elder in Venice,” is how the local CBS Los Angeles affiliate reported the attack.

That’s notably different from its past headlines such as “Caught On Video: White Woman Blocks Black Delivery Driver” and “White Woman Stalks And Calls Police On Man”. A white woman caught on video stalking and attacking a black man while wearing a gorilla mask is just a “protester”. For the first time, the media met a white woman attacking a black person whose race it felt no need to mention in either the headline or the body of the story.

The racial reckoning has always been politically selective. That’s true across the board.

The cultural establishment that is capable of discovering a sexist trope in the smallest criticism of Hillary Clinton, Elizabeth Warren, or Kamala Harris gleefully promoted every single sexist meme degrading Sarah Palin. Much as it still does when going after conservative women.

The key part of “identity politics” is the politics.

Leftists don’t believe in empowering black people as a group, no more than they believe all women. The privileges of the group only cover those members who remain politically loyal.

Political hypocrisy is old news. But the criminalization of racial projection now encompasses law enforcement and racist legislation like the CAREN Act. People can not only be fired for having racial intent projected on their actions, but are being prosecuted over those projections which remain not only racially, but politically selective. A white woman who calls the police is immediately suspected of racism, but a white woman attacking a black conservative isn’t.

That’s no longer just a matter of political bias, let alone racial bias, but is a civil rights issue.

Differing enforcement is the issue at the heart of civil rights. Laws should apply to everyone across the board. If the FBI is going to have a hair trigger for investigating racial incidents, it can’t also choose to ignore racial incidents in which the victim has the wrong politics.

Except that’s what it’s doing.

“How is this not a hate crime?” Los Angeles County Sheriff Alex Villanueva tweeted. “Because ‘woke privilege’ means a white woman can wear a gorilla mask and attack a black man without fear of being called a racist.”

When the Los Angeles Times can run a column accusing Larry Elder of being the “Face of White Supremacy”, when leftist journos routinely toss racial slurs like “Uncle Tom” at black conservatives, “racist” becomes a politically partisan slur for achieving political goals.

A leftist can wear a white hood and burn a cross on a black conservative’s lawn, or don a gorilla mask and assault him in public, without the media, corporations or the FBI batting an eye.

It’s not a hate crime when you have a monopoly on hate.