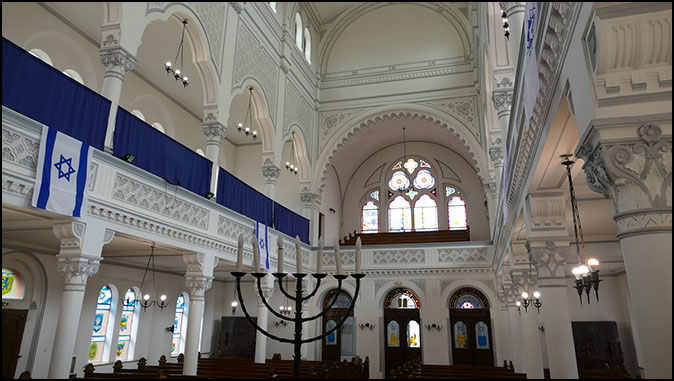 3 Synagogue Arsons in 1 Month in the Most Progressive US Cities
There’s a reason the media isn’t talking about the pattern.
By Daniel Greenfield

After an arson attempt at The Way Christian Church church in Berkeley, the pastor and the media blamed it on a racist who was lashing out at the church’s Black Lives Matter banner.

“McBride is now considering whether his decades long work challenging police brutality, registering people of faith to vote, or speaking out against white supremacy irritated the suspected arsonist, or whether they were angered by the Black Lives Matter sign hanging from the church,” a press release from The Way Christian Church announced.

“As our nation continues to confront our dark history of racism, I am glad that the parishioners of The Way and Pastor Mike McBride, who have been at the forefront of social justice and the Black Lives Matter movement, are safe,” Mayor Jesse Arreguín declared.”Anti-Black hate, and all forms of racism, has no place in Berkeley.”

A week later, Shameka Latoya Adams was arrested for a similar arson attempt against the Congregation Netivot Shalom synagogue on the same block. It’s unknown if Shameka had also tried to set the fire at The Way Christian Church, but the synagogue fire received far less attention. Nor did anyone suggest that trying to set fire to a synagogue might be antisemitic.

The Berkeley synagogue arson was another incident in a violent year, but not an isolated one.

In August, that same month, the Chabad Jewish Center in Portland suffered two arson attempts in 5 days. The first fire had been dismissed as an electrical issue, but afterward, the gas and power had been shut off, and the building had been boarded upwith no one inside.

The second fire was deemed suspicious and led to an FBI investigation.

This was not the first time Chabad centers had been targeted. Last year, two fires were set at the Chabad Center for Jewish Life in Arlington, Massachusetts, and a third fire at the Chabad Jewish Center in Needham.

The third synagogue arson in August took place at the University of Delaware Chabad’s Center for Jewish Life. After firefighters battled the blaze for three hours, the estimated damage stood at around $200,000. The fire marshall deemed it a case of arson and launched an investigation.

Three synagogue arsons in one month are as notable as the lack of interest in the pattern.

Berkeley and Portland are notorious incubators of leftist radicalism, and the University of Delaware takes pride in being both diverse and progressive.

There’s an understandable discomfort when talking about why attacks against Jews keep happening in some of the most “progressive” parts of the country. And there’s often just as much discomfort when confronting the perpetrators of some of the attacks on synagogues.

Shameka Latoya Adams has been described as a black woman, but the booking report lists Shameka as male. In May of last year, a man was caught on video hurling molotov cocktails at Congregation Anshe Sholom B’nai Israel in Chicago. The arson attempt failed and the suspect was apparently never caught, but the police were looking for a black male.

Last March, Andrew Costas, a Satanist, and his girlfriend, had plotted attacks on 13 churches and synagogues in Maryland. Costas was caught after he firebombed a Catholic church and defaced a synagogue with Nazi swastikas as part of a ritual to prove he was the antichrist.

While white supremacists have carried out the deadliest attacks on synagogues in recent years with mass shootings at the Tree of Life synagogue in Pittsburgh and an attack in Poway, California, the ongoing drumbeat of violence often comes from the blight of a failed society.

In March 2020, a homeless woman was arrested after starting a fire at Temple Emanuel in Pueblo, Colorado. The temple had been previously targeted in a white supremacist bomb plot in November of last year.

A homeless man had previously started a fire that destroyed the 119-year old Adas Israel Synagogue in Duluth, Minnesota, in the fall of last year. Also in the fall, a man had set fire to a backpack on the steps of the Park Slope Jewish Center in Brooklyn, New York on Yom Kippur.

While targeted antisemitic violence is very much a reality, the collapse of law and order, the political philosophy that turned over public spaces to mentally unstable vagrants and junkies has a heavy ongoing cost. The idea that there is a firm dividing line between racist violence and social instability, between hate and dysfunction, is politically appealing to liberals, but not true.

Social collapse hurts everyone. Especially those who are vulnerable and have a lot to lose.

An unstable society is more likely to spawn violent fanatics, white and black nationalists seeking meaning and purpose in a world that no longer seems to offer them one, not to mention criminals and crazies who will follow their impulses, instincts, and the voices in their heads.

The wave of Black Lives Matter violence already resulted in multiple attacks on synagogues. But, even further out of the spotlight, the rising extremism and instability is taking its toll.

And that’s one reason why the media and liberal organizations don’t want to talk about it.

When California Jewish organizations thought that a black church had been attacked because it had flown a Black Lives Matter banner, they issued outraged statements blasting racism.

But when the nearby Congregation Netivot Shalom suffered through an arson attempt and the alleged perpetrator inconveniently proved to be a black transgender person, the JCRC and the other organizations that had rushed out statements earlier maintained an uncomfortable silence.

This double game is being played after the fires in Portland and at the University of Delaware as the federations and their local papers wait to find out who the perpetrators of the arson are.

Not all burning synagogues are created equal. Some are condemned, many are ignored.

A white supremacist planting a bomb is firmly condemned, but a black man throwing molotov cocktails at a synagogue is carefully not discussed. The rising tide of homeless violence, and its spillover into synagogue robberies and arson is not a fit subject for social justice temples.

The country’s “progressive” cities are becoming wastelands of violence. And leaders who care more about social justice and the buzzwords of the political moment can’t afford to notice it.

But meanwhile, synagogues are burning.