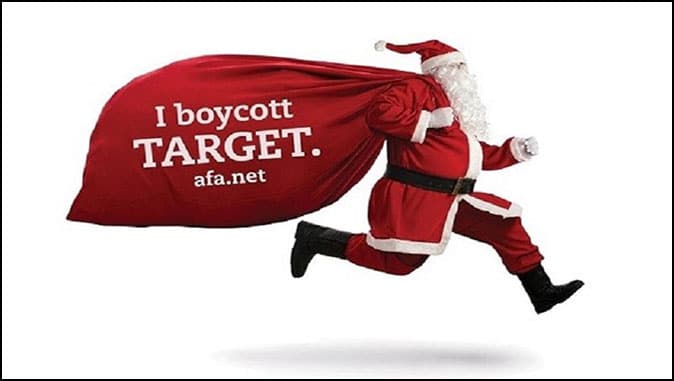 We realize that a great many American shoppers began shopping for Christmas this week and especially immediately after Thanksgiving.

Here are three convincing reasons you shouldn’t shop at Target this Christmas:

Despite Target’s denial that men entering women’s rooms is a problem, the reality remains that it is a major problem. We have the proof. For example, a Texas woman filed a report with the Harris County Sheriff’s office after a man entered the women’s fitting room area and took pictures of her as she was changing clothes.

The woman said she noticed that a cell phone camera was being held and pointed right at her from under the fitting room door. AFA has documented several other cases in which women and children have been exploited by sexual predators inside Target stores.

Target is hoping you don’t care

Target is hoping you won’t care that they allow men into women’s bathrooms and changing rooms and will do your Christmas shopping with them. AFA knows that you do care.

Stay the course with us

Any company as large as Target can withstand a short-term loss of sales. That’s where Christmas shoppers come in. Target is banking on this Christmas season to turn a huge profit for 2020.

Let’s hold firm to our conviction that men have no place in women’s restrooms and dressing rooms and continue our pledge to boycott Target stores, especially through the Christmas shopping season.

With Target hoping you’ll do your Christmas shopping with them, send them the strongest possible message you can and let Target know, “Don’t Count On Me!”

ACLU: Ignore Black Voices, Defund the Police By Alex Newman Regardless of what black Americans…

The Left Wants to Eliminate Competing Ideas By Dr. Michael Brown It was President Dwight…

Is Truth Irrelevant? Who cares about facts anymore, in this age of indoctrination? By Thomas…

What Biden’s Immigration Policies Would Do To America