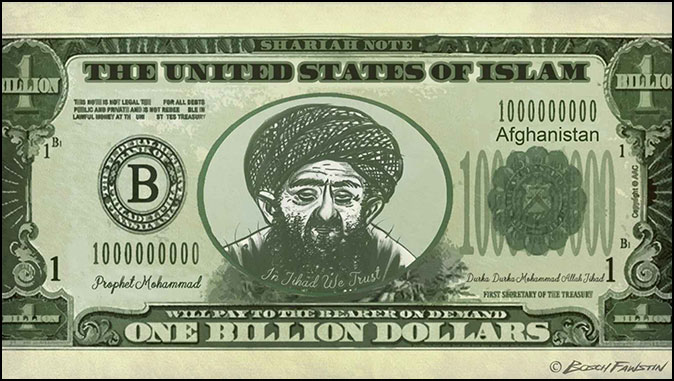 10% of Biden’s Afghanistan Aid Will Go To Taliban
Why are American taxpayers funding the Taliban?
By Daniel Greenfield

Deborah Lyons, the head of the UN mission in Afghanistan, met with Sirajuddin Haqqani, a wanted terrorist with the Haqqani Network, a Taliban component with close ties to Al Qaeda.

Lyons had served as Canada’s ambassador in Kabul when the Taliban carried out a suicide bombing against a Canadian embassy convoy. Lyons put up a monument to the security contractors who were wounded and killed, but they sued after being abandoned afterwards.

Sirajuddin Haqqani is a wanted terrorist with a $10 million FBI reward on his head.

“It is impossible to provide humanitarian assistance inside Afghanistan without engaging with the de facto authorities,” U.N. Secretary-General Antonio Guterres warned.

The de facto authorities being the Islamic terrorists of the Taliban and Al Qaeda.

The official word is that the Taliban won’t stop the UN humanitarian operations. Whether or not the Taliban will refrain from taxing the UN’s proposed $1.2 billion aid boom is another question.

Without waiting for that question to be settled, Biden has not only kicked in $64 million, but the Treasury Department issued a license for Afghanistan aid which states that it, “will continue to support the continuity of the U.S. government’s important humanitarian-related work in the region”, while claiming that “we have not reduced sanctions pressure on Taliban leaders or the significant restrictions on their access to the international financial system.”

The Taliban and most “humanitarian” groups in Afghanistan are using the Islamic Hawala system which enables international finance and massive terrorist fundraising at the same time.

And “humanitarian aid” is one of the best ways to fund Islamic terrorists. The Taliban impose an Islamic tithe which American taxpayers will end up paying once the millions in aid arrive.

The Taliban had set up its Commission for the Arrangement and Control of Companies and Organisations at least over a decade ago. Much like the old Afghan government, it made few distinctions between for-profit companies and non-profit charities, and taxed them both.

When the United States was in control of Afghanistan, USAID and the UN were exempted from government taxes. That was only fair considering that the vast majority of Afghanistan’s money came from USAID and the UN. But the local Afghan “implementing partners” paid taxes to the government and if they did business in Taliban territory, they also paid off the Jihadists.

We don’t know exactly how much taxpayer money went to the Taliban, but one survey found that contractors priced in 20% to 30% from their contracts as payoffs. More formally, the Taliban tend to charge a 10% Islamic tax on income and a 2.5% Islamic wealth tax. While this is modest compared to taxes in some western socialist countries, the only service the Taliban provide is not killing you. That doesn’t require much infrastructure, but is really valuable on the ground.

Every charity and humanitarian group has denied paying taxes to the Taliban because it’s illegal. All of them, or almost all of them, are likely lying because otherwise they’d be dead.

The Taliban had an extensive and sophisticated tax collection network long before they took Kabul which included all the usual elements of bureaucracy, registration, certificates, and assessments. They even have “NGO coordinators” who work with non-profit groups.

As an Economist article noted, “Britain’s Foreign Office had to remind ngos not to pay taxes to the Taliban.”

The Taliban at one point provided a list of non-profits that had registered with their Commission for the Arrangement and Control of Companies and Organisations. The group “included UN agencies, national and international NGOs and human rights organisations” including those that “rely on funding from a wide range of sources, including both the UN and the US government”.

That was back in 2013 when the Taliban had far less power and were less intimidating.

It’s a safe bet that nearly every non-profit still operating in Afghanistan is registered with the Commission, and was probably registered in previous years, and is paying off the Taliban.

Even if the UN succeeds in exempting its operations from taxes, the “implementing partners”, local Afghan groups, will still pay taxes to the Taliban. And their employees and those of the groups they fund will certainly be taxed. If the United States funds doctors and clinics, they will be taxed (as they were before the fall of Kabul), if we fund teachers, they will pay taxes to the Taliban, and so will every beneficiary of our “humanitarian aid”.

“We can maintain a humanitarian commitment to… the Afghan people in ways that do not have any funding or assistance pass through the coffers of a central government,” Ned Price, Biden’s State Department spokesman, falsely claimed.

Even if the humanitarian aid doesn’t initially pass through the Taliban’s coffers, it will inevitably end up there as it works its way through Afghanistan. Even if we just shipped food and medicines, the Taliban will take its ‘cut’ of the medicine and food as they used to before. They will then be able to dispense it to their supporters or resell it on the black market. Both are common practices for Islamic terrorist groups like the Houthis in Yemen or Hamas in Israel.

That’s why it’s common for there to be a “humanitarian crisis” in terrorist hellholes like Yemen or Gaza. No matter how much aid is sent in, the crisis never goes away because the terrorists not only steal the aid, they deliberately create the crises so that they have more aid to steal.

The only way to stop the crisis is to either kill the terrorists or at least stop sending them aid.

The 10% in the headline is a crude estimate. Any money or aid dispatched to Afghanistan will resonate back and forth through the economy with the Taliban taking a cut at every end. And the final amount will be a whole lot more than the formal Islamic tithe which the Taliban impose.

There is no way to provide humanitarian aid to a terrorist state without funding its regime.

And that will mean difficult moral choices.

When the Great Famine struck Russia as a result of Communist collectivism, the United States undertook a massive aid effort, sending $20 million (a quarter million in today’s dollars) in food aid. The noble effort saved millions, and bailed out the Bolshevik regime which showed no gratitude and went on to kill millions anyway. Then it built up a massive nuclear program while plotting to destroy the United States and murder hundred of millions of Americans.

No one wants to deny aid to suffering people, but when the cause of the suffering is a genocidal enemy regime, subsidizing it only makes things worse. Refusing to provide aid or normalize economic relations with the Soviet Union might have saved far more lives in the long run.

The Taliban won because many Afghans decided to support them or not to resist them. That is a choice that they will have to live with and learn to regret if anything is going to change.

Biden kept falsely claiming that he had to get out of Afghanistan because we couldn’t keep spending money on the failed state. Yet he began sending more money to Afghanistan before all of the Americans he abandoned behind enemy lines had even been evacuated.

After leaving massive caches of weapons and vehicles for the Taliban to enjoy, Biden is dispatching another $64 million, of which millions will likely end up in the hands of the Taliban.

The Taliban will impose their Islamic tithe on the aid that Biden sends to Afghanistan. And taxpayers will be the ones paying the tithe to support the Taliban’s Jihad against non-Muslims.

Americans aren’t just paying taxes to the government, they’re paying them to the Taliban.

End of the Republic

End of the Republic With the FBI raid on Trump’s home, America has fallen into…

Karine Jean-Pierre: It Was ‘Unconstitutional’ for Supreme Court to Overturn Roe

Karine Jean-Pierre: It Was ‘Unconstitutional’ for Supreme Court to Overturn Roe Old Joe and his…

Falsely Teaching Our Children That America is Evil