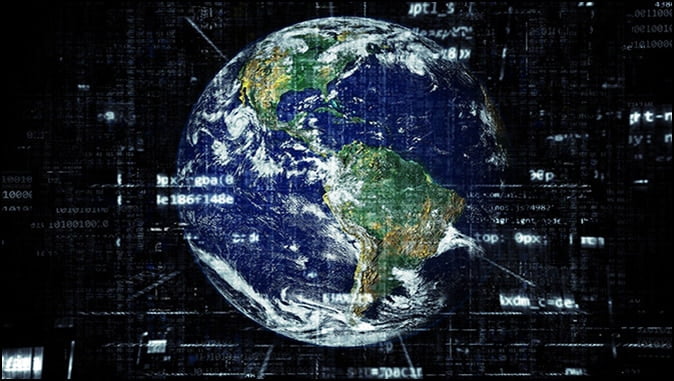 Imagine your next trip to the supermarket. You spend a couple of hours loading your cart up with goodies, you go to check out and your card is declined. How do you feel? Embarrassed, and then angry? Especially when you KNOW you have money in the bank.

So next, you excuse yourself real quick and you run over to an ATM to draw some cash out, but the same thing happens, no money and no service. Now what? Maybe you’ll call the bank and give them a good ‘whatfor’ or you’ll just tell the teller that something has come up and you will not be needing the groceries, either way, you walk out empty-handed.

Now imagine, that you can’t do ANYTHING from filling up your car with gas to paying your bills because your currency is no longer valid.

Oh, and by the way, your no longer receiving a paycheck from your employer.

You have to have this thing put on your hand or forehead to buy, sell, pay bills, buy groceries, hold a job, pay your mortgage, or anything else that requires a financial transaction for goods or services rendered. That’s what it will be like when this kicks off inside the Tribulation.

Men, women, families once of good standing (with excellent credit scores to boot) suddenly find themselves the people they once looked down on with pity. But, all you have to do is put this new mark put on your forehead or hand (it really is painless) and all of your former luxuries will be restored. Oh, and by the way, once you do this, you’ll be making the WORST decision in the history of mankind. At best, you’ll be trading in 7 years of comfort, for eternity in torment and darkness. At worst, you probably won’t even live out the full 7 years. Sounds like a bargain huh?

Well, there is coming a day and age when this will become reality. Oh, it may not happen lickety-split overnight, but changes are coming. Kinda like how the music industry quit making cassette tapes and moved over to Compact Discs.

At some point, all the cassette tapes are relegated to the dust bin and no one is making them anymore. You have NO choice but to buy a new radio that plays CDs. Or like when television left analog and went strictly digital. Did you have any say in it? No.

When the time comes for this ‘new and improved’ way of living/shopping/security/freedom comes about, either you get on board or you get left behind. And by behind, I mean, utterly left to either starve or be killed by a tyrannical government.

There is really great article that does an outstanding job in covering this topic. My intent here is not to reveal some deeply hidden mystery that only I am privy to (cause I’m not), but to share some thoughts peripheral to this event.

With the body of Christ removed at the Rapture, what semblance of organized “Christianity” that remains, will be both Christ-less and incapable of offering a path to salvation that holds to its ecumenical swayings. I offered up Roman Catholicism, simply because they’re the most global “Christian” organization in the world. They’ve not shown any qualms or regret in the past in either killing true believers (Crusades, Inquisitions) or from embracing non-Christian beliefs in order to stay relevant (Paganism/Islam).

Mormonism may play a prominent role in this time as well, since they share such a striking similarity to Islam, embracing both universalism and to an extent, pantheism and will probably be the most organized and intact American religious system left standing, post-Rapture. Either way, what is left is an empty shell of pure religiosity that will be used as a tool to prepare the world to worship the satanically indwelt Antichrist himself.

That leaves only the practical matter of enforcement of said worship. The mark is not just a system of worship; it is a system of control.

Satan counters with a system that is emplaced by the Antichrist as a logical, pragmatic choice to many of the world’s problems. The world’s economic systems are currently being shaken down so that it only leaves the mark as the only practical solution.

How does the world get out of the current financial quagmire that it is in? It is completely unrealistic to think the US could pay off 16 Trillion dollars (let alone 65 Trillion in unfunded liabilities). Our citizens have become dependent on many of the entitlement programs that have put a majority of the country on life-support.

If the government threatened to;

a) impose huge cuts to MEDICAID, MEDICARE, Welfare, and Social Security in order to pay down the debt, or

b) move off the dollar to a new system where no cuts were needed, I believe the US population would overwhelmingly elect the latter.

Greece, Paris, and London are just tiny microcosms of what we could expect in every major city, if strict austerity measures were put in place.

But it’s not only the US but the entire world that finds itself in the same debt-laden boat. The problem with the US though, is that we are supposed to be the big pole in the tent that holds up the whole show. If we go down, (as a witness to the 2008 financial collapse) we’ll drag the world down with us.

Nations like Brazil, Russia, China, and France have only recently expressed openly, a desire to move away from the dollar into a basket of currencies. Whether it is a digital credit, special drawing rights, or a new currency altogether such as the Phoenix, they will all fail. That is not my opinion on the matter that comes straight out of the Bible. The world ends up in one global system, run by one man, using one currency.

“And he causeth all, both small and great, rich and poor, free and bond, to receive a mark in their right hand, or in their foreheads: And that no man might buy or sell, save he that had the mark, or the name of the beast, or the number of his name. Here is wisdom. Let him that hath understanding count the number of the beast: for it is the number of a man; and his number is Six hundred threescore and six.” – Revelation 13:16-18

Many theories are out there as to who this man (Antichrist) is. Speculation aside, there is only one man named in scriptures whose number adds up to 666, and that is through the number of family members he has.

This man’s descendants were among those Jews that had been taken captive by the Babylonians under King Nebuchadnezzar, and these were the remnant who was returning to Jerusalem at the end of their captivity. I do not know if one of this man’s descendants turns out to be the Antichrist or the False Prophet, but I do know that the Jews would never accept a man as Messiah who was not Jewish.

All we really know is that the Apostle Paul stated that he (the Antichrist) would not be revealed until the Restrainer (the Holy Spirit) is removed (2 Thess 2:7-8).

But to point out one last thing, Paul called the Antichrist the ‘Son of Perdition’. The only other person called that in scriptures was Judas Iscariot (John 17:12). It’s not any stretch of the imagination to assume that Paul was familiar with who Judas was, and what he did.

Maybe the False Prophet is hailed as the Messiah, but he, in turn, directs worship to the Antichrist who the Jews reject (for not being Jewish) which is why he commits the Abomination of Desolation spoken of in Matthew 24:15 and 2 Thessalonians 2:4 like his much earlier predecessor Antiochus Epiphanes IV (Daniel 11:30-32).

But those refusing to worship him will have to suffer death or starvation for not receiving the mark since they will not be able to buy or sell.

In order for that to be a threat, the technology first needs to exist to make that possible. We’ve spent the last 40 years being primed for this kind of system. From the gold standard to the fiat system at a national level to the personal desensitization through the use of credit and debit cards, online banking, and moving the society off of cash to plastic. We’ve also had the conditioning in place by getting us used to instant (food, service, and solutions) and by marketing and advertisements that continually sell us the notion that we deserve the best, and nothing less will do.

The mark of the beast will obviously not be labeled as such, nor its consequences, but will be presented as the most logical, reasonable way forward in troubled times. We know that the mark is not used prior to the Tribulation, so whatever technologies are currently out there today (and there are many now that could fit the bill) are just being staged for the right ‘crisis’ to implement them when the time is right. Assuming that the Rapture of the Church is the trigger that causes the worldwide chaos, I foresee a couple of possible avenues.

– If the Rapture is a standalone event, aside from the immediate effects of wrecks, looting, fires, etc.. it will trigger an economic avalanche of panic in the US due to the sudden removal of millions of consumers, employers, employees, tax/mortgage/bill payers that will put the already fragile economy into panic mode. The government will bypass the constitution and move to join an economic union.

– If the Rapture is accompanied by some other cataclysmic event (EMP/Solar storm, nuclear or dirty bomb, or mega-thrust earthquake), the US may cede control of the government to the EU “temporarily” until the US can get back on its feet.

Is it worth it? Are even the worst 7 years of your life worth an eternity in hell, let alone the hell on earth you will face if you ‘opt-out’ for a few years of momentary comfort here on earth? Would you spend a million dollars on a car that you could only drive for a day? Probably not, so why would you take something infinitely worse? The technology exists today, the hour is late, and our Lord and Savior is returning just like He said He would.

“And, behold, I come quickly; and my reward is with me, to give every man according as his work shall be.” – Revelation 22:12

Seals, Trumpets, and Bowls By Pete Garcia Someone recently asked me to explain why God…

Undertow By Pete Garcia Then I stood on the sand of the sea. And I…

The Bootstrap Paradox By Pete Garcia "Guess you guys aren't ready for that yet, but…