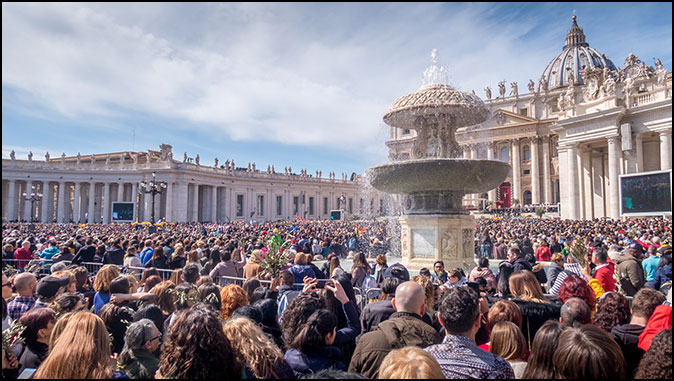 The Mark of the Beast – Part 2
Mystery-Babylon Inc.
By Pete Garcia

A couple of weeks ago, I had a very vivid dream about this very subject. In fact, I woke up from it (3AM-ish) to scribble down some notes. Normally, I don’t remember my dreams, so it’s a rare thing indeed for me to have one that vivid and also have the self-discipline to get up and actually write it down while simultaneously wiping the crusties from my eyes. I hope you’ll join me on this excursion, and as always, a caveat to this interpretation: as the Apostle Paul succinctly put it, ‘for now we see through a glass darkly’. – (1 Corinthians 13:9-12)

Most scholars assumed that Mystery Babylon was simply the accompanying religious system that the Beast uses to promulgate his/their madness upon the peoples of the world. Yet, neither government nor religion causes people to be astonished since they have been ever-present with mankind down through the ages. It has to be something that either the world has never seen before, or it is something that has not been seen for a LONG time and is present again in today’s day and age. Two verses jump out at me that I think although they are of different topics, they’re very much connected.

“Here is wisdom. Let him that hath understanding count the number of the beast: for it is the number of a man; and his number [is] Six hundred threescore [and] six.” – Revelation 13:18

“And here [is] the mind which hath wisdom. The seven heads are seven mountains, on which the woman sitteth.” – Revelation 17:9

Both instances call the reader to reckon a special understanding of what John was speaking of. One has to deal with a specific number that will be utilized by the entire world in all manners of financial transactions and as a matter of loyalty and worship. The other, is describing Mystery Babylon, and in this, John marveled at it:

a) to wonder [with great wonder i.e.] exceedingly

The NIV states that John was ‘astonished’. The ESV records it as ‘marveled greatly’. The NASB states it as ‘wondered greatly’, so based on the context and the other translations; we can dismiss number one from the Greek Lexicon here as a possible alternative.

Apparently, this is something that really blew John away, which is saying a lot, considering all he had already been witness to. The angel goes on to tell him about what the Mystery is:

“And the angel said unto me, Wherefore didst thou marvel? I will tell thee the mystery of the woman, and of the beast that carrieth her, which hath the seven heads and ten horns. The beast that thou sawest was, and is not; and shall ascend out of the bottomless pit, and go into perdition: and they that dwell on the earth shall wonder…” – Revelation 17:7-8

So what is Mystery Babylon?

Unlike the beast, she is not a government. She rides the beast:

– Kings have committed fornication with her, and the people of the world have been made drunk by the wine of her fornication; meaning mankind has not only gotten drunk, but has received “the bite”, by her addictive lies. (vs. 2) (“the bite”= alcoholic term for hopelessly addicted)

– She sits upon the ‘scarlet covered beast’ full of names of blasphemy, having seven heads and ten horns, meaning, she fully embraces a plurality of gods and beliefs, and implemented by the antichrist’s governmental system. (vs. 3)

– She herself, is wrapped in purple and scarlet, holding a golden cup full of abominations, meaning she will be greatly lavished (this system) with great wealth and holds to this diabolical lie that tolerates everything, except Jesus Christ. (vs. 4)

“And upon her forehead was a name written, MYSTERY, BABYLON THE GREAT, THE MOTHER OF HARLOTS AND ABOMINATIONS OF THE EARTH.” – Revelation 17:5

– She is called ‘Mystery’, which means she is not the literal Babylon, but a symbolic picture of representing the ‘Babylonian’ system of control in which has enslaved the world from the beginning.

– She is called “Mother of Harlots and Abominations of the earth”, meaning she is the originator of all false doctrines. Every evil and insidious religion, doctrine, belief system has their roots in her, regardless of where they are, or who started them. We know this because, Satan is the “Father of Lies” and if it is not of God, it’s from Satan.

“And the serpent said unto the woman, Ye shall not surely die: For God doth know that in the day ye eat thereof, then your eyes shall be opened, and ye shall be as gods, knowing good and evil.”

Every religion and belief system, not based around the Gospel of Jesus Christ, inherently promotes this notion that we can be as gods. It is bathed in pride and sprinkled gratuitously with the idea that man can achieve salvation without God’s help. It was the lie that led to God destroying the world by a global flood. It led God to separate mankind at Babel. It led to the destruction of Sodom and Gomorrah. It led to God having to come down here in person, and sacrifice Himself so those who believed could be saved. Mystery Babylon is the lie that man can be as a god. She rides the revived Roman Empire while shrouding herself with the Babel globalist’s mantra of, one race.

“And the woman which thou sawest is that great city, which reigneth over the kings of the earth.” – Revelation 17:18

It’s not until Revelation 17:18 that the woman finally described as ‘that great city’ who controls all the kings of the world.

Only two cities are called ‘that great city’ in the Bible; Nineveh and Babylon. She is a system of control over the rulers of the earth. At the Tower of Babel, mankind united under the world’s first dictator, Nimrod. Mankind, united outside of the will of God, is a disastrous thing to behold indeed. God knew back at the Tower of Babel, that mankind under the leadership of a single man, would have reaped apocalyptic judgment back then.

It was God’s mercy, not cruelty that separated mankind to prevent us from destroying ourselves many thousands of years ago.

It is likely, that since the global infrastructure for global worship is already in place via the Roman Catholic Church network (more so than any other single religion) that this could easily and readily be put in place through the church as the mechanism of implementation.

Granted, any church still remaining beyond the rapture will likely be incorporated into this system, but the Roman Catholic Church already has a global reach and doctrinally doesn’t have any qualms about re-writing their doctrine to stay relevant during this time.

* Not saying that all Roman Catholics are a part of this system, rather, the system itself is what I am referencing.

The papacy has already shown a great willingness to compromise doctrinal beliefs to accommodate Islam and Protestants alike in a misguided effort to promote ecumenism.

As the EU waffles, the US sinks, and the ‘Arab Spring’ disintegrates, the Union for the Mediterranean (UofM) will take on more significant responsibility in stabilizing the region, ultimately fulfilling the role of the revived Roman Empire. When the US collapses, what’s left of our government may cede control of our military assets to NATO and the European Union, of which to prevent them (military weapons) from falling into the hands of rogue ‘terrorists’.

Within the UofM, contains the previous ancient dynasties of Egypt, Greece, Rome, Persia, and Assyria (Syria). The “Arab Spring” will shake up the current power holders in the Middle East and fill the vacuum with leaders who are willing to take war to Israel.

In lieu of their biblically prophetic defeats, most likely the UofM will be there to reorganize the pieces, just like they did after the Ottoman Empire’s defeat at the end of World War I.

And since Rome is the geographical hub there, it seems logical that it would also serve as its headquarters for both the religious and economic center that can control and direct this resurrected empire.

Maybe this was why John was astonished. At the time he recorded this (95AD), the Church in Rome was still Christian. He could also be astonished at the fact that the Roman Empire still exists at the time of the end.

Either way, as the old saying goes, ‘All roads lead to Rome.’

Seals, Trumpets, and Bowls By Pete Garcia Someone recently asked me to explain why God…

Undertow By Pete Garcia Then I stood on the sand of the sea. And I…

The Bootstrap Paradox By Pete Garcia "Guess you guys aren't ready for that yet, but…