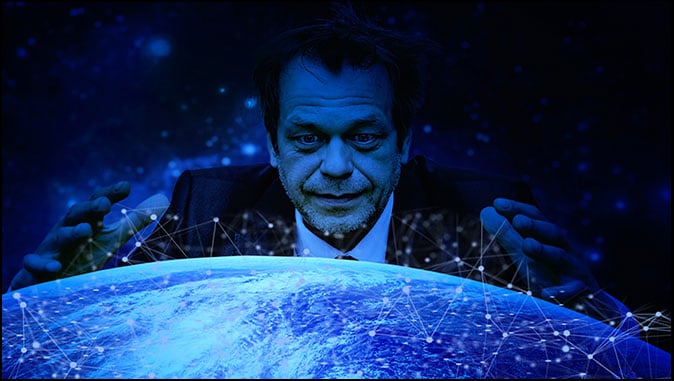 The Image of the Beast – Part 2
By Pete Garcia

“If an AI possessed any one of these skills—social abilities, technological development, economic ability—at a superhuman level, it is quite likely that it would quickly come to dominate our world in one way or another. And as we’ve seen, if it ever developed these abilities to the human level, then it would likely soon develop them to a superhuman level. So we can assume that if even one of these skills gets programmed into a computer, then our world will come to be dominated by AIs or AI-empowered humans.” – Stuart Armstrong, Smarter Than Us: The Rise of Machine Intelligence

When reading about the four horsemen of the Apocalypse, there is one thing I have always wondered about. Maybe it’s not four separate riders, but one rider (the Antichrist) who is on the first white horse, then changes horses moving from white to red, to black, and finally to the pale horse, sequentially. Nothing in the text disputes that notion, I think we’ve just kind of accept four different riders because that’s the way it’s always been depicted in the artwork. But considering all the weapons of mass destruction (WMD) already out in the world today, what one thing would give ANY nation(s) the edge in a future military conflict? More bombs? More tanks? More submarines? More satellites? More drones? More soldiers? More internet bandwidth?

Not that having more of any of the above hurts a nation in as far as their ability to project strength, but neither does it give them the definitive edge that a super-intelligent ASI system could. Imagine a system, which could go into your adversary’s networks, and shut it down the day before your planned invasion of that nation. Not just shutting down the internet, but electrical power grids, water plants, anything that is connected to any type of internet or electrical-based system, which could potentially be a target.

Or this ASI could launch this nation’s missiles at itself, so you don’t even have to invade them. It could also do that while simultaneously freezing all of its monetary assets and holdings, hacking and data mining every citizen’s and politician’s email, and wiping out any communication networks that might exist. ASI would truly be a game-changer, especially considering how interconnected our world is these days. This potential alone, is why AI has become the new arms race. Maybe this is why three of the horns (nations/regions) give their authority to the Beast? (Daniel 7:8; Rev. 17:13)

We know that AI Caliber 1 is readily in use these days. We know that AI Caliber 2 is already in the process of being developed. I suspect, that given the secrecy at which certain groups like the CIA, NSA, DARPA, and others (private entrepreneurs, and other nations) are working to develop this and may have it in varying stages…but are not discussing it. Much like the secretive Manhattan Project in the 1940s, the man on the street had no idea the US was working on the most powerful bomb in human history until it was used against the Japanese at Hiroshima and Nagasaki, this too may be something that is complete already and we just aren’t aware of it. AI Caliber 3, from Caliber 2, doesn’t seem that far a stretch then, since you could use Caliber 2 to assist in developing Caliber 3. The hard part is getting to Caliber 2.

Now, AI by definition, simply means that this software system reaches a level of self-evaluation and understanding, and becomes sentient, or self-aware. Being self-aware would also intrinsically create a level of understanding for its own self-preservation, in which the system determines by itself who has control over it if anyone. Since we know that one man ultimately does (the Antichrist/Little Horn/Beast/Son of Perdition), he somehow gains control over it probably through supernatural means. Interestingly, some of the smartest men in the world, a few of which have made their living off of inventing the very systems that they fear could one day be their downfall, are now expressing genuine concern over the thought of computers gaining super-intelligence.

Because this technological development is still ongoing, maybe why a lot of what is going on in the book of Revelation, particularly chapters 6-19, remains both eerily foggy and yet familiar to our understanding. Much like Revelation 11:9-10 was a mystery for bible students of earlier generations, the technological limitations of any given period of time, limits people’s ability to comprehend that the technology was actually attainable. IOW, you don’t know what you don’t know.

Now that this AI technology exists, and has for the most part become commonplace, we have largely become desensitized to its advancements in our own day. This is in large measure, because of the entertainment industry, who floods the cultural marketplace with books, television shows, and movies that includes AI of every varying scope. I could literally list off dozens of movies alone that have. Here are some of the more familiar ones you will remember:

That is Hollywood, here is reality. This includes a shortlist of technological advancements that exist and is being developed today:

Vision enhancing (ability to magnify at the blink) contact lenses

If politicians these days are gridlocked and struggling to come to terms with issues like the national debt, terrorism, and failing economies, imagine how much more they will struggle to wrap their minds around the ethics of the topics listed above. (Which is probably why these topics are generally avoided) Some of these issues are redefining what it is to be human, and thus, requires ethical and moral boundaries to be put into place, to ensure that the human race will and can survive. This puts in a new light, what Jesus said in Matthew 24:22…

Politicians in the US and abroad, are struggling to come to terms with how quickly these advancing technological breakthroughs are changing our reality, and it is likely that they never will. This is why I believe that it will take some form of super-intelligent AI system to sort through all the issues and problems man has today. Moreover, it will be a man who is either given control or has control over this AI system who will be the one who wields this overwhelming power. But seeing as the only other alternative to AI in bringing this pseudo-world peace to earth and simultaneously solving all of our problems (for a moment) is visitors from outer space. Both seem incredible, but AI seems more likely.

The term’s like ‘technological singularity’ and just ‘singularity’ are still in the stages of being adequately defined, but Ray Kurzweil (Google) believes it is when “the time when the Law of Accelerating Returns has reached such an extreme pace that technological progress is happening at a seemingly-infinite pace, and after which we’ll be living in a whole new world”. (Source: Gizmodo)

The reason that we don’t understand exactly how or what the Mark of the Beast is just yet, doesn’t mean that this technology doesn’t exist, we just don’t know how exactly it will be introduced or utilized. But we can see this technology in its embryonic form through things like RFID chips and digital tattoos. AI is most likely what bridges our gap in our knowledge in this regard, and also leapfrogs us forward over that same bridge at a pace many are probably not prepared for.

Since the United States, the world’s predominant economic and military superpower, is trying to take the lead in this new arms race for artificial intelligence and we know according to Scripture, that the revived Roman Empire is the final world super-power at the end, we should be able to reasonably assume that somehow Europe beats the US to the punch in the AI arm’s race. Once AI is established, it will revolutionize science and technology, and life as we know it on earth within a relatively short period of time.

While I expect AI to play a significant role in this image of the beast coming to life, it is the False Prophet who enforces through means of signs and wonders (2 Thess. 2:9), the merging of economics with religion and is able to do this, by using a super-intelligent AI, man’s DNA, and a globally interconnected network.

Update: Since this original publishing in 2015, there has been a new development regarding the potential “image” that the Beast may use. See here to meet the new giant that is coming to a number of cities around the world.

“Here is wisdom. Let him who has understanding calculate the number of the beast, for it is the number of a man: His number is 666.” – Revelation 13:15-18