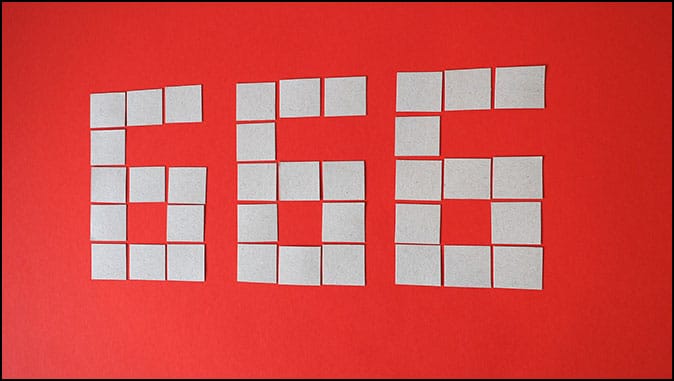 The Image of the Beast – Part 1
By Pete Garcia

Not many years ago, students of the Bible struggled with many of the prophetic texts that had yet, as of then, come to pass. One of these issues was whether Israel would come back as a nation. Both the OT and NT alluded to this, but 1,878 years had passed and still, there was no national state of Israel anywhere on anyone’s maps. And then, on May 14th, 1948, there was. Of course, this is old news to us now, because this transpired some 73 years ago, but the point being, until it happened, debate raged whether it ever could happen.

Another point of contention is found in Revelation 11:9-10, in which these two witnesses who are a thorn in the Antichrist’s side for 3 ½ years are killed, and their bodies left lying in the streets of Jerusalem for all the world to see. Students and scholars of ages struggled with the idea of how the whole world could see their bodies in Jerusalem if they weren’t physically there to see it. And then there was the invention of direct broadcast satellite television, who through geosynchronous satellites in geostationary orbits around the earth, afforded mankind for the first time, the ability to see events around the world as they happened. Now, 31 years later, we are desensitized to these particular technological advancements, because we’ve been inundated with a 24/7 news and entertainment cycle since the late 1980s. The point being, things remain unknowable, until the time in which events catch up, and then they become knowable, even forgettable.

But looking back, neither of these two events took place in a vacuum. We should expect to see progressive stages of development that continue to shape and build on that first new vision until fulfillment. Whether that new vision was a future homeland for the Jews in Europe back in the 1890s, or in the ability to see global events as they happen from anywhere in the world. But oftentimes, it’s hard to see the forest for the trees when you’re in the middle of the forest.

I think the same can be said with this idea of the coming one-world system headed up by the man we know as the Antichrist. The point of clarification here is that there have been many antichrists. (1 John 2:18) I think that is in large part, because Satan is not omniscient, and doesn’t know when the end of the last days will begin, so he always has a man (or men) waiting in the wings ready to take center stage. But what we know according to the books of both the OT Prophets and the NT Apostles, is that a global system is coming, and this final system will dominate the entire world.

I think the biggest hindrance people have in recognizing the lateness of the hour, is that we tend to view the future, based on what happened in the past. True, history does have a way of rhyming, but technological advancements these days are evolving so rapidly that the only constant, is change. And with new breakthroughs in genetics, robotics, communications, weaponry, etc. happening by the day now, it is transforming how we understand the world we live in. Nothing seems impossible anymore.

I happened to catch a recent podcast from “a View From the Bunker” (VFTB), in which Derek Gilbert was interviewing Zoltan Istvan on the topic of “Religion and AI”. The discussion centered on an article Zoltan published discussing religion and Artificial Intelligence (AI), and how these two would intersect at a future juncture in human history. Zoltan Istvan was bringing the discussion points both as an atheist and Transhumanist, who was questioning which religion (if any) would be the one that would have its particular beliefs, ethics, and values installed into this new system. The point I think they kept coming back to was, it would depend on who develops it first.

Artificial Intelligence by definition, is when a system becomes sentient, or self-aware. This is primarily associated with computer software programs, not robots. Robotics is like the body, and the software, the brain.

While I was listening to this discussion, a series of ‘eureka’ moments began going off in my head, where I began to see the seriousness of the gravity of the situation. AI is the new arms race for the 21st century and will eclipse anything we’ve ever seen before…because whoever develops it first, has the potential to control everything. Now, before I get too far into this, we need to recognize that AI already exists. We interact with it unknowingly almost every day. So let’s define and categorize what we are talking about.

AI Caliber 2) Artificial General Intelligence (AGI): Sometimes referred to as Strong AI, or Human-Level AI, Artificial General Intelligence refers to a computer that is as smart as a human across the board—a machine that can perform any intellectual task that a human being can. Creating AGI is a much harder task than creating ANI, and we’re yet to do it. Professor Linda Gottfredson describes intelligence as “a very general mental capability that, among other things, involves the ability to reason, plan, solve problems, think abstractly, comprehend complex ideas, learn quickly, and learn from experience.” AGI would be able to do all of those things as easily as you can.

AI Caliber 3) Artificial Superintelligence (ASI): Oxford philosopher and leading AI thinker Nick Bostrom defines superintelligence as “an intellect that is much smarter than the best human brains in practically every field, including scientific creativity, general wisdom and social skills.” Artificial Superintelligence ranges from a computer that’s just a little smarter than a human to one that’s trillions of times smarter—across the board. ASI is the reason the topic of AI is such a spicy meatball and why the words immortality and extinction will both appear in these posts multiple times. (Source: Gizmodo)

What I think that most people miss in reading topics like this, is how fundamental this will change everything. Imagine trying to explain to someone back in the 1970s or ’80s, about a coming future internet, that is what trying to explain what a coming AGI and ASI will be like. Remember your life before the internet, and now imagine it without it. How different would it be? Surely, this would revolutionize life in an even greater magnitude, than the Internet has in our own day. So when Mr. Gilbert and Mr. Istvan were discussing jokingly whether this was going to be ‘Bapti-costal’ or ‘Presby-Lutheran’ system, I couldn’t help but thinking, what if the exact opposite happened?

Granted, a Chinese version of AI would be significantly different in regards to ethics, morals, and religious programming. Imagine then an Iranian one, a North Korean version, or an American one. What if this new AI system, which happens to be anywhere from 1 to 1,000 times smarter than the smartest human, dismisses all religions as inadequately archaic? What if tried to take everything in the Bible literally? Makes you wonder at least at the genius that God had in using different forms of language; similes, metaphors, parables, symbolism, etc., all this mixed in with the passages we hold to literally doesn’t it?

But what if this system is not being able to process the varying nuances of every single religion, first tries the ecumenical approach of blending them all together, which turns into a global form of pantheism, which then ultimately leads to the view that the system itself is worthy of worship? All we know for sure is that after the Rapture of the Church, whatever passes for religion afterward will be exceedingly hostile to the true Christian faith.

“And he was given a mouth speaking great things and blasphemies, and he was given authority to continue for forty-two months. Then he opened his mouth in blasphemy against God, to blaspheme His name, His tabernacle, and those who dwell in heaven. It was granted to him to make war with the saints and to overcome them. And authority was given him over every tribe, tongue, and nation.” – Revelation 13:5-7

For over 100 years now, the naturalistic sciences have been feverishly working to eradicate the ‘old-fashioned’ idea of a supernatural Deity who created all things by His sheer will…hence why the ‘big bang theory’ and ‘theory of Darwinian Evolution’ are taught not as a theory, but as fact in every major university and most of the public school systems in the modernized world. When anyone with a degree dares to question those humanistic teachings, they are subsequently blacklisted and immediately written off as kooks, while those academic and political types who do espouse these humanistic theories are lauded as mental giants for holding to such ideas. The list of prominent atheistic scientists is lengthy indeed.

Men like Richard Dawkins and Stephen Hawking’s opinions carry ten times more weight in academia than anything degreed men like Ken Hamm or others have to say on the subjects of Creation and human origin. Imagine a system that was 1,000 times smarter than Dawkins, or Hawking’s, and had every ounce of information that was available to humanity, at its digital fingertips? Imagine that the world’s most prolific spokesman for Christianity (or pick a religion) attempting to debate this AI system at a televised event.

That system could not only trounce you in a debate by drowning you in data, but while debating you, it shuts all your bank accounts down, empties them out, wipes out any digital record of your existence, and then falsifies everything about you to every major social media site within seconds. Would you want to debate it? Who could stand against a system like that? What if one man had the power to control this system? Frightening thought isn’t it?