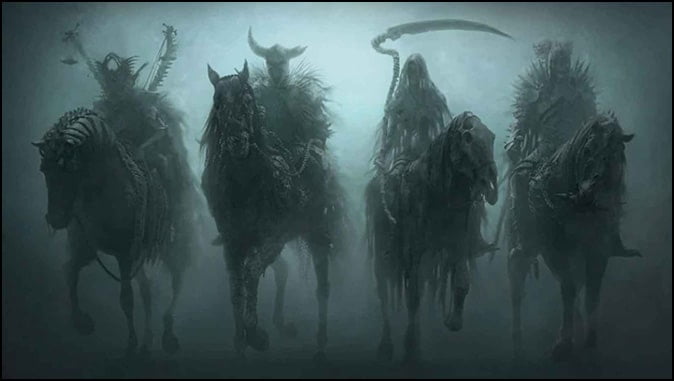 The Four Horsemen
By Pete Garcia

“Now I saw when the Lamb opened one of the seals; and I heard one of the four living creatures saying with a voice like thunder, “Come and see.” And I looked, and behold, a white horse. He who sat on it had a bow; and a crown was given to him, and he went out conquering and to conquer.”

The first horsemen unleashed in the Seal Judgments go forth conquering, and to conquer. He does not use violence, but rather, subterfuge and deception thus manifesting the spirit of Antichrist. He, like Lucifer, is a master communicator and orator, issuing forth lies and is to his core, wicked incarnate. He rises from obscurity as the “Little Horn” and quickly overthrows/subdues three of the ten Kings to gain the majority within the regionalized global government. Although we can’t say for sure whether this rider begins as a political movement, and the Antichrist rises up out of it, or is specifically relating to the man of sin himself, either way, it is the final human political movement. The Antichrist is either a politician or comes from within the ranks of the global corporate or banking elite. He comes from within the boundaries of the old Roman Empire and begins his blasphemous ride at the start of the seven-year Tribulation and will continue throughout the duration of the 70th Week. He will begin as “the man of sin” but by the mid-point of the seven years, he will suffer a near-fatal assassination. His seemingly miraculous resurrection will be because Satan (freshly thrown out of Heavens and now confined to the earth) will physically possess his body. At this point, he will become (like his predecessor Judas Iscariot) the “son of perdition.”

“When He opened the second seal, I heard the second living creature saying, “Come and see.” Another horse, fiery red, went out. And it was granted to the one who sat on it to take peace from the earth, and that people should kill one another; and there was given to him a great sword.”

It’s unknown whether this horse contains a rider (as an individual) or a rider (as a movement). Nevertheless, this horse’s red ride unleashes the vicious spirit of conflict as peace is violently ripped from the earth. Prior to the Rapture of the Church, the Holy Spirit restrained evil through the use of varying tools: divine intervention, opposing governments (ex, Allies vs. the Axis powers, etc.), and the Spirit-led Church. Now, there is no restraint and great violence fills the earth. Violence erupts not just between nations, but between states, cities, and even neighbors. Instead of violence being the last resort; violence will now be the first resort and many millions will die during this horse’s blood-soaked ride for the next seven years.

When He opened the third seal, I heard the third living creature say, “Come and see.” So I looked, and behold, a black horse, and he who sat on it had a pair of scales in his hand. And I heard a voice in the midst of the four living creatures saying, “A quart of wheat for a denarius, and three quarts of barley for a denarius; and do not harm the oil and the wine.”

The next horse released by Christ upon the earth is scarcity in the form of widespread famine, hyperinflation, deflation, and economic collapse. These will all come simultaneously as a result of the widespread violence and chaos unleashed by the previous rider’s ride across the earth. The vast, complex network of international supply chains built up during the 20th and 21st centuries will now fall into complete disarray. National currencies will have collapsed and those banking systems not already converted over to the new Central Bank Digital Currencies (CBDCs), will become worthless. The Antichrist (rider on the white horse) will not let these crises’ go to waste, and will use the geopolitical and economic chaos to assume total control over everyone. Nevertheless, we see here that the elite will still have access to the luxuries they held prior to the Rapture of the Church.

When He opened the fourth seal, I heard the voice of the fourth living creature saying, “Come and see.” So I looked, and behold, a pale horse. And the name of him who sat on it was Death, and Hades followed with him. And power was given to them over a fourth of the earth, to kill with sword, with hunger, with death, and by the beasts of the earth. – Revelation 6:1-8

As a result of the first three riders, the left-behind earth-dwellers will have suffered enormous disruptions to their everyday life. This will open the door for the final horsemen, pestilence, death, and hell.

Prior to the flood, the animal kingdoms were seemingly docile and unafraid of humans. After the flood, God put a natural barrier between animals and humans that has become the norm ever since. After the Rapture, this barrier is not only strengthened, but weaponized as the animal kingdoms turn against humans. Everything from domestic dogs and cats, to lions and bears, will become antagonistic against all unredeemed earth-dwellers. These beasts include the microscopic kingdoms of bacteria (Eubacteria, Protista, and archaebacteria) as well as viruses. The world will be flooded with pandemics and plagues, unlike any time before it.

By the end of the opening of these four Seals, nearly a quarter of the world’s population will be dead. By today’s standards, this will mean nearly two billion people will have died in just a couple of years. The world will be filled with the stench of death everywhere, and the worm and vulture will begin their seven-year feast upon the earth.