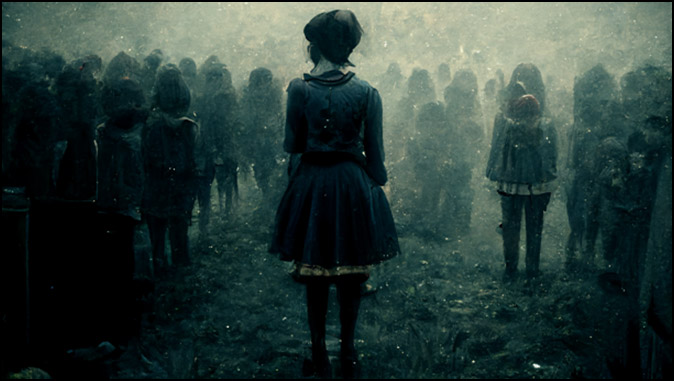 The Cursed Generation
By Pete Garcia

Although it might surprise us to see how depraved a society can become, it is not a surprise to God. It’s not even the first time. These low points in human history are like crescendos of decadence that mankind cycle through when they become too proud; they forget that a righteous God exists and His judgment is sure to follow.

“…since it is a righteous thing with God to repay with tribulation those who trouble you, and to give you who are troubled rest with us when the Lord Jesus is revealed from heaven with His mighty angels, in flaming fire taking vengeance on those who do not know God, and on those who do not obey the gospel of our Lord Jesus Christ. These shall be punished with everlasting destruction from the presence of the Lord and from the glory of His power…” – 2 Thessalonians 1:6-9

Throughout the many hundreds of generations that have existed, there have been at least five occasions when mankind became so wicked that God had to personally intervene. The first time it happened, there was a global judgment that nearly wiped out all of mankind. The last time will again be global in nature. For all intents and purposes, we can call these cursed generations.

1. Antediluvian Generation: “Then the Lord saw that the wickedness of man was great in the earth, and that every intent of the thoughts of his heart was only evil continually. And the Lord was sorry that He had made man on the earth, and He was grieved in His heart. So the Lord said, “I will destroy man whom I have created from the face of the earth, both man and beast, creeping thing and birds of the air, for I am sorry that I have made them.” But Noah found grace in the eyes of the Lord.” – Genesis 6:5-8

2. Tower of Babel: “But the Lord came down to see the city and the tower which the sons of men had built. And the Lord said, “Indeed the people are one and they all have one language, and this is what they begin to do; now nothing that they propose to do will be withheld from them. Come, let Us go down and there confuse their language, that they may not understand one another’s speech.” So the Lord scattered them abroad from there over the face of all the earth, and they ceased building the city. Therefore its name is called Babel, because there the Lord confused the language of all the earth; and from there the Lord scattered them abroad over the face of all the earth.” – Genesis 11:5-9

3. Sodom & Gomorrah: “The sun had risen upon the earth when Lot entered Zoar. Then the Lord rained brimstone and fire on Sodom and Gomorrah, from the Lord out of the heavens. So He overthrew those cities, all the plain, all the inhabitants of the cities, and what grew on the ground.” – Genesis 19:23-25

5. Last Generation: “But know this, that in the last days perilous times will come: For men will be lovers of themselves, lovers of money, boasters, proud, blasphemers, disobedient to parents, unthankful, unholy, unloving, unforgiving, slanderers, without self-control, brutal, despisers of good, traitors, headstrong, haughty, lovers of pleasure rather than lovers of God, having a form of godliness but denying its power. And from such people turn away! For of this sort are those who creep into households and make captives of gullible women loaded down with sins, led away by various lusts, always learning and never able to come to the knowledge of the truth.” – 2 Timothy 3:1-7

“I call heaven and earth as witnesses today against you, that I have set before you life and death, blessing and cursing; therefore choose life, that both you and your descendants may live; that you may love the Lord your God, that you may obey His voice, and that you may cling to Him, for He is your life and the length of your days; and that you may dwell in the land which the Lord swore to your fathers, to Abraham, Isaac, and Jacob, to give them.” – Deuteronomy 30:19-20 (My emphasis)

In Deuteronomy 30, Moses gave his final and sobering instructions to the Hebrew nation before dying at the ripe old age of 120 years. Here he lays out the “blessing and cursing” that would befall them with regard to their future obedience or rebellion from God’s ordinances. While this guidance was directed specifically to the Israelites via covenant, the general applications (should they be followed) would apply to all nations.

God didn’t expect, for example, the Amorites to follow all 613 laws He gave Moses, primarily because He didn’t give the law to them. However, if they followed (or didn’t) the basic Ten Commandments (thou shalt not kill, steal, commit adultery, honor thy father and mother, etc.) their nation could slow down or speed up the judgment laid upon them. At least eight of the Ten Commandments are those baseline God-conscience values He imprints into every person’s conscience regardless of nationality or ethnicity.

For clarification, every person ever born, has God’s imprint upon them because all humans were made in His image. Therefore, the truth God puts into each person comes in the form of our conscience which is knowing basic right and wrong. This basic knowledge has to either be suppressed by the individual or corrupted by that society in order to ignore this divine truth. Secondly, God’s dealing with the nation of Israel came in the form of two types of covenants- an unconditional covenant (i.e., with Abraham, Isaac, Jacob, and their descendants), and the conditional covenant, as given to Moses upon which the nation of Israel agreed too. Regarding the former, God told Abraham:

“I will bless those who bless you, And I will curse him who curses you; And in you all the families of the earth shall be blessed.” – Genesis 12:3

And in Genesis 14, we see this blessing already playing out with regard to the battle of the Four Kings Against Five. One who escaped the battle had run back to give news of what had just happened to Abram. Here the text says:

“Then one who had escaped came and told Abram the Hebrew, for he dwelt by the terebinth trees of Mamre the Amorite, brother of Eshcol and brother of Aner; and they were allies with Abram.” – Genesis 14:13

It’s a well-known fact that the Amorites were indeed, giants (See Amos 2:9-10, Numbers 13:29, 32) and yet, here, we see at least three of them, allied with Abram. Is it possible that because of their alliance with Abram, God’s blessing (on Abraham’s behalf) gave them additional time (400 years) to repent before using the Israelites as His instrument of destruction?

Now when the sun was going down, a deep sleep fell upon Abram; and behold, horror and great darkness fell upon him. Then He said to Abram: “Know certainly that your descendants will be strangers in a land that is not theirs, and will serve them, and they will afflict them four hundred years. And also the nation whom they serve I will judge; afterward they shall come out with great possessions. Now as for you, you shall go to your fathers in peace; you shall be buried at a good old age. But in the fourth generation they shall return here, for the iniquity of the Amorites is not yet complete.” Genesis 15:12-16

It certainly seems like it. Hold on to this thought of 400 years.

Our nation was founded in 1620, by European pilgrims seeking religious liberty. They made a covenant before God and man (the Mayflower Compact) that they would consecrate this new endeavor to the glory and advancement of God and the Christian faith. Up until the middle of the twentieth century, the United States was a beacon of liberty, a force for good, and a sanctuary nation for all seeking religious freedom.

Now, 402 years later, men can be women, the innocent are brazenly struck down in broad daylight, and babies are slaughtered by the millions on the altar of convenience, that we, like those cursed Amorites, have reached the fullness of our iniquity. All that remains is the fear and dread of the judgment coming upon this nation, and this world.

More specifically, that last generation being the final human generation still residing in a fallen world is not some far-off unknown time, but our world of today. Be that as it may, does that mean we are cursed? Absolutely not. We can see in each of the previous examples (#1-5) that God always spares His remnant before judgment falls. I know my regular audience knows this, but a growing number in the new readership may not. Let me reiterate that point. God spares His remnant BEFORE the judgment, not during, nor after. (See also Genesis 18:25). In keeping with the idea of the Cursed Generation and in the spirit of 2022, my personal pronouns are now: I/You/We.

“But concerning the times and the seasons, brethren, you have no need that I should write to you. For you yourselves know perfectly that the day of the Lord so comes as a thief in the night. For when they say, “Peace and safety!” then sudden destruction comes upon them, as labor pains upon a pregnant woman. And they shall not escape. But you, brethren, are not in darkness, so that this Day should overtake you as a thief. You are all sons of light and sons of the day. We are not of the night nor of darkness.” – 1 Thessalonians 5:1-5