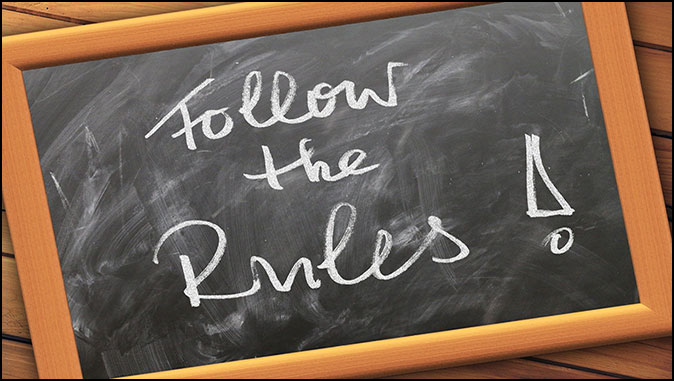 Rules for the Remnant
By Pete Garcia

But concerning the times and the seasons, brethren, you have no need that I should write to you. For you yourselves know perfectly that the day of the Lord so comes as a thief in the night. For when they say, “Peace and safety!” then sudden destruction comes upon them, as labor pains upon a pregnant woman. And they shall not escape. 1 Thessalonians 5:1-3

That day was supposed to be like any other. Before it happened, life went on like it always had…work, school, play, family. But then it happened. And now no one knows what is going on. All anyone knows is that a bunch of people and all the children are disappeared. So if you’re reading this and you find yourself in the above scenario, know that this event is called the Rapture of the Church. The Church is not a denomination, but people from all walks of life. Anyone, who has either placed their faith in the death, burial, and resurrection of Jesus Christ or is under the age (or mental capacity) to make such a decision, is caught up to heaven. They have been changed from mortal to immortal, and now exist in the reality of eternity. They have been given perfect, flawless, and timeless bodies to exist with and in the divine order for the rest of eternity. This was the Rapture. It’s in the Bible. Read it for yourself if you can find one. [John 14:1-3; 1st Thessalonians 4:13-18; 2nd Thess. 2:1-3; 1st Corinthians 15:50-56; Philippians 3:20-21; Revelation 3:10]. So if you’re reading this, you need to know what is coming. You’re life and eternity will depend on it.

The Rapture– this just happened. The Church is rescued and evil is no longer restrained on the earth.

The Time Gap– we don’t know how long this gap will last, perhaps months or even a few years, but there is a window of time between the Rapture and the official start of the Tribulation. During the gap, there are some things we think will likely happen:

2. The world will reorganize into ten-regional powers. This global system becomes known as The Beast.

3. Out of the ten regional governments, three will be overthrown and one man (the Antichrist) rises to power. He will be aided by another known to us as The False Prophet. He will be able to do supernatural signs and wonders. They create a mark that is put on either the hand or forehead to buy or sell. DO NOT TAKE THIS. Remember, these two men will not appear evil at first. (Revelation 6, 13)

4. Two Witnesses also arrive during this time. They will have supernatural powers and will preach from Jerusalem for 3 ½ years. They cannot be killed or destroyed until the 3 ½ years are completed. (Rev. 11)

The Tribulation (Revelation 6:18) the official name for this is the 70th Week of Daniel (Daniel 9:27). It is a seven-year period, which God will unleash 21 divine judgments upon the earth. Over 1/2 the world’s population dies as a result. The seas are turned to blood, fresh drinking water is turned to blood, and the sun and moon cease to give its light. A contract between the Antichrist and the nation of Israel begins the 21 judgments.

The Seven Seals (Revelation 6): 1/4 of the world’s population dies

5. Martyrdom of those who refuse to worship the beast (slaughter of the Tribulation saints)

6. A Great Earthquake that causes such a geological disturbance, the dust and smoke obscure the sun, stars, and moon

The Seven Trumpets (Revelation 8-11): 1/3 of the world’s population dies

1. Hail and fire mixed with blood

2. A great mountain cast into the sea

3. Wormwood- a meteor that poisons (makes bitter) a third of the drinking water

4. A third of the sun, moon, and stars darkened (great cold, darkness)

5. First Woe (Demonic Locusts plague those who take the mark)

6. Second Woe (one-third of mankind killed by a demon army)

1. Grievous Sores on those who take the mark of the beast

2. The rest of the seas turn to blood

3. Rivers and fountains turned to blood

5. Great darkness over the seat of Beast Kingdom

The Battle of Armageddon (Revelation 19)

At the end of the seven-years, the Beast’s armies, along with the kings of the east, gather in the Megiddo Valley (Israel) try to destroy what remains of the Jewish people. The skies are rolled back and Christ returns in power and glory, followed by the Armies of Heaven. He destroys the armies gathered there. The Beast & False Prophet are cast alive into the Lake of Fire.

The Judgment of the Nations (Matthew 25)

Christ judges the remaining nations. Those who aided Israel during this 70th Week, are allowed entrance into the earthly, millennial kingdom, of which, Christ rules as the undisputed King. Those who attacked or did ill towards the nation of Israel (and her inhabitants), are cast into outer darkness and await judgment.

The Millennial Reign of Christ (Revelation 20)

Christ will reign upon the earth for 1,000 years. The world is released from the curse of sin and becomes a paradise. People will be given unnaturally long life spans. If a person does not choose to follow Christ, they will die at the age of 100. At the end of the 1,000 years, Satan is loosed for a season and is cast into the Lake of Fire.

A new heaven and new earth are created, as the former ones are passed away. For the redeemed, eternity future will be a glorious adventure. One filled with worship of God will being in His presence, exploration (seeing all that God has been working on these past two thousand years), of peace, joy, comfort, happiness, contentment, and love forever.

Rules for the Remnant

1. Do place your faith in the finished work of Jesus Christ’s death, burial, and resurrection.
A. Admit you’re a sinner and need a Savior (Romans 3:23, 6:23)
B. Believe in your heart that the Lord Jesus Christ died for your sins, was buried, and God raised Him from the dead (John 3:16, Romans 5:8)
C. Call upon the name of the Lord, trusting in the Lord Jesus Christ for salvation (Romans 10:9-13)

2. Do NOT take the mark of the beast. This means you will not be able to buy or sell anything, but if you take the mark, you are damned forever. Better to struggle for a few years than to suffer for all eternity. (Revelation 14:9-11)

3. You will probably be martyred. The Beast’s systems will be vast; artificial intelligence, global surveillance, robotic weapon systems, as well as supernatural forces (demons) aiding them. Do not fear the first death (physical). Do fear the second death (spiritual). The first death is not the end, only the beginning of a glorious future with Christ. If you die spiritually as well, you will spend eternity in the Lake of Fire.

4. Endure to the end if you can. Run, hide, pray. If you survive the seven-years, you will enter into the Millennial Kingdom.

Author’s note: Print two-sided (Georgia font, type size 9). Laminate. Keep or give it to someone.

The Incurable Curiosity of the Cosmos: Vol. 1

The Incurable Curiosity of the Cosmos: Vol. 1 By Pete Garcia Many of you might…

The Four Horsemen of the Apocalypse

The Four Horsemen of the Apocalypse By: Pete Garcia As ominous as they are mysterious,…

Forbidden Knowledge, Part 2 By: Pete Garcia Man sought the forbidden to regain that which…

Glow in the Dark Faith

The Grapes of Wrath

The Grapes of Wrath By Pete Garcia “The non-intervention of God bears very heavy interest,…