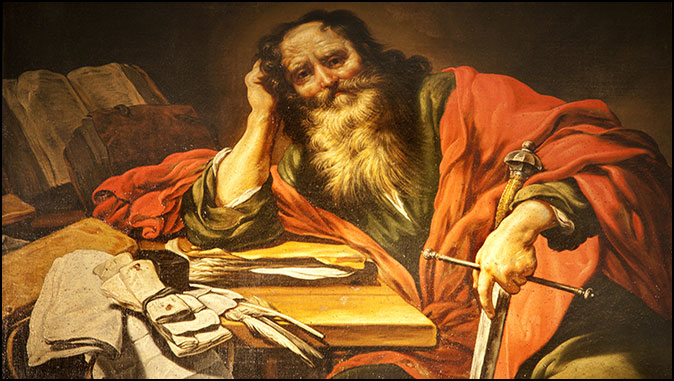 I have grown very fond of the Book of Philippians lately in light of the difficult circumstances everyone is facing involving COVID19 and also with my own health issues keeping me from doing what I am used to doing.

I’m reminded of the common expression of the glass being half empty/half full. Is it a positive thing or a negative thing? It’s all about how you see it I suppose.

In the book of Philippians, Paul has been arrested on his third missionary journey and thrown into jail and he is writing a letter to his Philippian brethren to reassure them that he is okay and that he has developed a mental discipline that no matter what is going on he can see the silver lining in these negative circumstances and the hand of God in all of them.

He could see that he wasn’t a prisoner of his circumstances and could walk in the joy of the Lord. The joy of the Lord in the midst of adversity is very different from happiness. The word “happiness” comes from the Latin word “HAPP” which means happenstance or luck. The world system will allow you to experience emotional well-being as long as circumstances are good and everything is honky dory but oh my goodness, when things become unfavourable the happiness dissolves in a heartbeat. This is not the joy of the Lord.

The joy of the Lord is an emotional well-being that a person can have regardless of their circumstances and this is why the book of Philippians was written. God, through Paul, is showing us that we can use our negative circumstances for positive outcomes, whether it is Satan trying to cause our problems, or we ourselves have made a wrong decision somewhere along the line, or it is nobody’s fault and just life being difficult. Sometimes God even puts us into a difficult situation for His own purposes.

So Paul writes to the Philippians, not from a place of comfort but from a place of imprisonment, and tells them that his circumstances have turned out for the greater good of the gospel and not to shed tears for him as he isn’t shedding any for himself.

“Now I want you to know my brethren that the things which happened to me have actually turned out for the furtherance of the gospel” – Philippians 1:12

So many times we can tend to feel sorry for ourselves when adversity comes knocking but we need to see it from a position of faith and trust that God is accomplishing things in the midst of the negative that He could not do otherwise while things are going well. This is what was going on with Paul.

Paul saw the reality of what God was doing, not in spite of his imprisonment but because of it.

After a series of chains of events and Paul using his Roman citizenship for a fair trial in front of Caesar, Paul is eventually taken to Rome and imprisoned there. Another opportunity that Paul realized was to do with a vibrant church that had begun in Rome without the help of an Apostle and he had wanted to go to Rome to doctrinally solidify this church and it was always Paul’s goal of getting the gospel to Rome.

On the orders of Caesar, while waiting for his trial, Paul is chained to a Praetorian guard. No ordinary guard, but an elite guard. Paul saw this as the guard being chained to HIM and not the other way around. There was no-where this guard was going anywhere soon and Paul used the opportunity to speak to this man of the gospel, a strategic move, knowing he would go later into his high society community and spread the gospel to influential people who would then venture on into the rest of the world. All roads lead to Rome as they say. Rome, at that time, was a very focal place in the eyes of the world.

Paul knew his imprisonment would accelerate his evangelistic opportunities as it had eleven years earlier when he had been beaten and thrown into jail with Silas for being a public nuisance. Lydia, (The first gentile) conversion was the first of three significant events associated with the beginning of the church in Philippi, the second being the exorcism of a demon from a slave girl, which resulted in Paul and Silas being thrown into prison and the third was the conversion of the jailer along with his family.

Still using his imprisonment as yet another opportunity, Paul wrote the books of Ephesians, Colossians, Philippians, Philemon, and later on the second book of Timothy.

Paul was also safer being in prison chained to this Praetorian guard than he was a free man because he was the target of a group of religious men who hated Paul for preaching to the gentiles and had taken a sacred oath to take his life.

Can you see that the zeal and fervour of the wicked can’t overcome the providence of the Lord? Paul saw this, and this is why he had the Joy of the Lord in the middle of circumstances that would have made some of us feel very down and out. But not Paul. He saw all this with silver linings because now those who knew of his imprisonment were taking up the slack with zeal and boldness and evangelising and praying like never before. Without fear!

So, I’m encouraged and blessed as I read in Philippians, of Paul, who is one of my hero’s of the Bible, because he is a wonderful role model for the rest of us to be able to see his negative circumstances in a positive light.

In the midst of all this COVID19 kerfuffle or whatever it is you might be facing, trusting God’s provisions in His word and trusting that He is TRULY sovereign and in control and working all things together for our good in the middle of our adversities, not just for those around us but for our growth and maturity, and so He might be glorified.

“And we know that all things work together for good to those who love God, to those who are the called according to His purpose.” – Romans 8:28