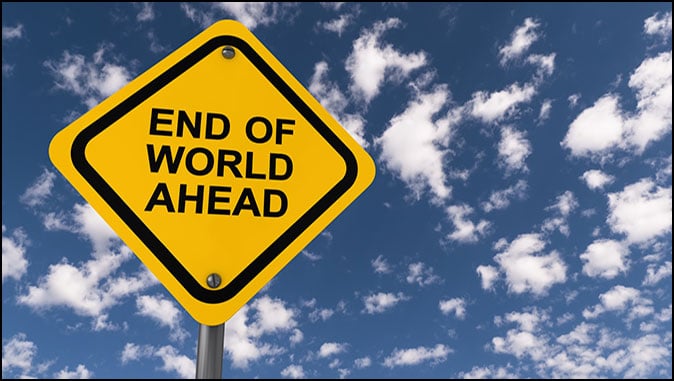 It’s Later Than You Think
By Pete Garcia

To the Dispensationalist, the entirety of humanity’s short span on this earth can be broken down into clearly definable seasons…or ages in which God (who never changes) dealt differently with mankind in regard to his relational standing before Him.

“To everything there is a season, A time for every purpose under heaven:” – Ecclesiastes 3:1

In the Garden of Eden, man was commanded not to eat from the tree of the knowledge of good and evil. Aside from being told to be fruitful and multiply, and to take dominion of the earth…this was the only ‘thou shalt not’ commandment given from God. They lived in innocence and tended to the Garden until the day they broke the one commandment they were instructed not to do. Adam and Eve ate from the tree allowing sin to enter the human race and they were cast out of that perfect Garden. Thus, mankind entered a new season in which they would live their lives, ruled by their newfound conscience of knowing good and evil.

From then until the Flood, there were roughly 1,560 years that man did what was right in his own eyes. There was no Law, no Bible, no governing authority by which man could live in peace with his fellow man and His maker. It quickly became a time of lawlessness, in which, even the fallen angels had crossed over into forbidden territory by mating with human women.

By the time Noah was to build the Ark, mankind had sunk to unimaginable depths of depravity. In fact, it was so bad, that God had to destroy mankind (save eight persons) with the Flood in order for mankind to survive. This global cataclysm brought the age in which man would rule by his conscious to an abrupt and violent end. At the end of it, God covenanted with Noah (Noahic Covenant) that innocent blood would no longer be shed without consequence. And with the creation of capital punishment instituted, the framework for man to rule over other men began the age of human government.

The age of promise was in the calling of Abraham from the land Ur of the Chaldees to the Promised Land which his descendants would inherit forever. Abraham was the first person to be called a Hebrew in the Scriptures, thus we can conclude that prior to that, there were only Gentiles. Now, there were two races of people; Jews and Gentiles. God foretold Abraham as he slept, that the Hebrews would be enslaved for 400 years before they could inherit the land. This time was necessary to give the current inhabitants (the Amorites) time to repent (which they didn’t). God would then use the Israelites to become their judgment, cleansing the land of their impurity. During this time, Abraham’s faithfulness to sacrifice his only begotten son would foreshadow the way in which God would provide a path to redemption some 2,000 years later.

Moses led the Israelites out of bondage and into the wilderness, in which he received the Law from God…thus beginning the age of the Law. This age went on for roughly 1,500 years before finding fulfillment in the first coming of their Messiah, Jesus Christ. As was prophesied, He was betrayed for 30 pieces of silver and crucified on a Cross on behalf of the sins of the world.

Before He died, Jesus stated that He would create a body of people known as the Church (Matthew 16:17-19), who would continue on until He personally came and took them back to be where He was (John 14:1-3). Just as sin entered the world through the first Adam, redemption would enter the world through the last Adam, who is Christ our Lord.

Eve was taken and created from Adam’s side, so too would the Bride of Christ be taken from the side of Christ. When a woman is about to give birth, her water will break in which blood and water pour forth. On the cross, when His side was pierced, blood and water poured out symbolizing the coming birth of the Church all made possible through His death. Our giving of the Holy Spirit was at Pentecost as mentioned in Acts 2. From there, almost 2,000 years have transpired, to which, we have seen the Church go through the seven stages (Revelation 2-3). To recap: The rough numbers according to genealogies and history

– From Creation until Abraham, was 2,000 years [Innocence, Conscience, and Human Government]

And like the wise King Solomon noted…EVERYTHING…has a season. Seasons have two things in common….they have a beginning, and they have an end. As shown, each of the previous ages had beginning and endings, so why would it be any different for the age that we currently live in? Looking back, what was unique about the dispensation of the Law was that it was cut short by approximately seven years.

“Seventy weeks are determined for your people and for your holy city,” – Daniel 9:24

The Prophet Daniel was given the 70 weeks of years prophecy by the angel Gabriel, in which, from its starting until its end, there would be a total of 490 years (70 x 7) that would be set aside for the nation of Israel.

It began in Nehemiah 2 (445BC) with the commandment to go forth and rebuild not the Temple, but the city of Jerusalem, and would end approximately 173,880 days (483 [360-day] years) later as Christ made His triumphal entry into Jerusalem on Palm Sunday. We know historically, that the remaining seven years were not fulfilled after the resurrection, nor do they fit any seven-year period between then and now. But according to the angel Gabriel…those seven final years are still set aside for Israel and will absolutely occur:

“Now I have come to make you understand what will happen to your people in the latter days, for the vision refers to many days yet to come.” – Daniel 10:14

Those who subscribe to the reference in 2 Thessalonians 2:7 of the Restrainer being the Holy Spirit often believe that the Holy Spirit restrains evil from the world at large. Rather, seeing that there has been an ever-increasing amount of evil since Pentecost, I believe that the Restrainer has restrained evil not from the world, but from destroying the Church. In Matthew 16:18, Jesus said that “He would build His church, and the gates of hell would not prevail against it.” This implies that the Church (body of Christ) would ever be on an offensive against the strongholds of the devil since hell’s gates are meant for defensive purposes until the age of the Church has come to its end.

Christians have seen bloody periods of persecution in the past, where the world unsuccessfully attempted to stop the spread of Christianity. We have seen and are seeing various forms of corruption that enter the Church in an attempt to pollute it with false and apostate doctrine…yet, there still remains a remnant that is faithful to the word. We’ve seen the oppression of the believers in these last days grow like cancer in an attempt to shame and silence believers…yet there still goes the Gospel out of the mouths and minds of those who are not afraid to speak the truth.

The door which God opens cannot be shut by anyone, except God. It will not be until the Rapture of the Church when the Body of Christ is removed allowing the Antichrist and his beastly system to overcome the Tribulation saints. This purging effectively leaves the Antichrist’s worldly kingdom pitted against one nation in particular…Israel. This is the purpose and the season in which the fulfillment of the 7 final years finds its culmination.

The world has conditioned the masses to think that life will just continue on as it always has. They base this idea on their corrupted theories that life slowly came about by evolution over millions of years even though their theories are illogical and scientifically impossible. Furthermore, they largely reject the Bible’s account of man’s true history on this planet.

We don’t know how much longer the Holy Spirit will hold back His restraint. However, if the past is any key to understanding the future when our time (the Church Age) has reached its fullness, it will come to its inevitable end (just as the rest of the dispensations have-save the Law). At nearly 6,000 years since Creation, and nearly 2,000 since Christ’s death, burial, and resurrection, the end of our age is about to end suddenly and without warning.

“But concerning the times and the seasons, brethren, you have no need that I should write to you. For you yourselves know perfectly that the day of the Lord so comes as a thief in the night. For when they say, “Peace and safety!” then sudden destruction comes upon them, as labor pains upon a pregnant woman. And they shall not escape.” – 1 Thessalonians 5:1-3

IYKYK By Pete Garcia Part 1: The Conversation You know the one I'm talking about.…