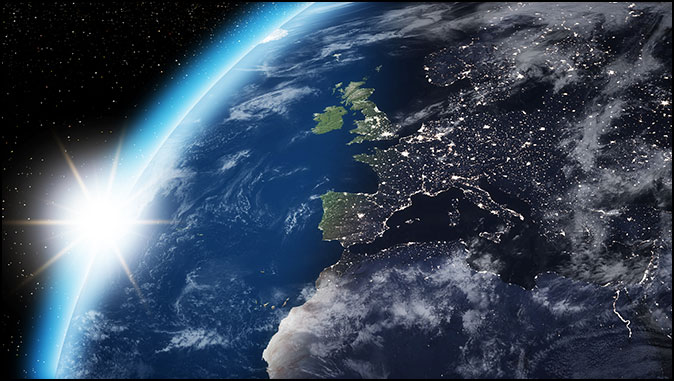 While currently not burning up any headlines in our recent past, the Union for the Mediterranean (UfM) has slowly been making headway over key foundational issues.

So what makes this union of nations so critical to understanding Biblical prophecy? Considering that two of the key end-time players are a national Israel, and a revived Roman Empire, it has a lot to do with it.

Currently, we know that the structure of the European Union is unsustainable in its current form. Many of the leading economic giants like former Federal Reserve Chairman Alan Greenspan and billionaire bad boy George Soros have said as much. The truth is, we are watching the pages of Scripture literally coming to fulfillment before our very eyes. The Bible talks of 10 kings that will arise in the end times. From Daniel’s perspective in the 5th century BC:

“After this I saw in the night visions, and behold, a fourth beast, dreadful and terrible, exceedingly strong. It had huge iron teeth; it was devouring, breaking in pieces, and trampling the residue with its feet. It was different from all the beasts that were before it, and it had ten horns.” (Daniel 7:7)

What John was shown at the end of the 1st century AD:

“The ten horns which you saw are ten kings who have received no kingdom as yet, but they receive authority for one hour as kings with the beast.” (Revelation 17:12)

From Daniel’s perspective, there was no distinction between a future coming Roman empire and what we see today. This was all still future to him, and as history has bared out, one would be logically lead to believe that such a kingdom would have found its complete fulfillment in ancient Rome. But John, having been given further insight into this, was alive at the height of the then Roman Empire, and he is told these kings had not yet received authority, which has to mean that this was as of yet, still future to John.

Historically speaking, what is described herein Daniel and Revelation, has not yet occurred. Rome only ever operated with one emperor at a time, the exception being when the empire split in half with one ruling in the west (Rome) and the other ruling in the East (Constantinople) somewhere in the 4th century AD.

Our world today has become interlinked to the point that what happens in Greece will have ripple effects all the way to Japan. Depending on the size of a nation and their GDP, will predictably determine the level of effects it will have on the world should significant changes happen.

When the United States collapses (which we are currently in the process of but aren’t admitting), the world will be left reeling. The Lehman Brothers collapse in 2008 put the frailty of our economic situation on full parade for the world, which is why the world is in a mad dash for another system to be in place before this scenario happens again.

So far, Europe has had two hundred and thirty-four years to see how America has worked. We broke the mold, if you will, for modern nations. Nations who are linked together by a common currency, economy, and religious tolerance are much less likely to fight. True, we had a Civil War in the 1860s, but it took around 250 years from the founding of Jamestown to reach that point, and somehow our Union has still held together until this day.

Europe, and all its royal kings and queens, had been the center of the world’s power and attention for thousands of years. America, at its founding, was a backwater wilderness where Christian fundamentalists went to slug it out in a spartan existence. Americans are the newcomers, and we have really only been the ‘center’ of the world’s attention for not quite even a century.

At the time we were considered to be the largest Christian nation in the world who just happens to come to prominence after the Europeans, Russians, Chinese, and everyone else took the beating of a lifetime. We became the last man standing if you will, at the end of World War II, just in time to arm and support a re-born national Israel. Coincidence?

How is the UfM different?

Currently, the problem in the European Union, is that it expanded too fast to properly deal with the realities of the financial and cultural disparities such a diverse union was bound to face.

All historical baggage aside, Europe’s expensive and expansive socialists programs bankrupted their systems, and morally bankrupted generations of Europeans into a ‘cradle to grave’ mentality, hopelessly addicted to a nanny-state. But Europe wants that limelight back, and they can see the winds of fortune changing in their direction, and so a political entity like the UfM is just thinking ahead of the curve.

First off, let’s revisit and see where this all stemmed from originally. The idea was first touted at the Barcelona Process in 1995. The idea was out there floating around the atmosphere as a good idea, but no serious momentum built up until French President Nicolas Sarkozy made it part of his 2007 reelection campaign motto. What really motivated him to run with this idea?

The goal of Sarkozy’s Club Med is therefore not, after all, to reinforce the geopolitical weight of France, but instead to consolidate the power of NATO and the United States over the Middle East. (Source)

Really it is European Colonialism 2.0 with the Arab/Israeli peace agreement thrown in there for good measure. The intent, therefore, is to rub out any form of Arab nationalism and Islamic fundamentalism, tap into the vast resources of oil, natural gas, and cheap labor. But none of that is possible until the Israelis and her angry neighbors come to some sort of peace-agreement and finally, once and for all, lay down their arms. What better way to do this than to incorporate them into the same empire?

What makes the leadership of the UfM think they have what it takes to succeed by mixing Southern Europeans with North African Muslims, Jews, Lebanese, Arabs, and Turks?

Adding to the mix is the gargantuan natural gas fields found off the coasts of Israel and in the shared waters with Greek Cyprus, which has the potential to be a real boom for both economies. Certainly, this will be incorporated into the final paperwork that accompanies any type of peace agreement as Europe seeks a more reliable energy partner.

The UfM could then be the main supplier of energy to the rest of the northern EU member nations, pumping much-needed wealth into Greece, Italy, France, and Spain. A large, unemployed labor force eagerly looking for work within the north African nations could facilitate the building and working of the pipelines, oil rigs, and transportation of oil and gas. The UfM could use the framework of NATO (or NATO itself) as the billy-club to wallop any nation(s) who threatens to disrupt the peace again. I believe Libya was the test run for this sort of military diplomacy.

The Psalm 83/Isaiah 17 war will leave many in the Sunni-Arab world reeling from the sting of defeat yet again by the Israelis. Too many Muslims have suffered for too long either under corrupt military dictatorships, or brutal Islamic ‘brotherhoods’ and will seek some sense of normalcy out from underneath the banner of Sharia law. Ultimately, peace on the street and bread on the table will trump ideology.

A preemptive strike on Iran over their nuclear ambitions and the destruction of Syria’s Damascus might persuade Turkey to join out of necessity, rather than ideology. So who then is left out of the lucrative gold-mine the Mediterranean nations are currently sitting on? The Magogian-Triad: Turkey, Russia, and Iran.

Likely, Turkey will seek retribution for not getting cut in on the natural gas fields sitting just outside their maritime borders. Russia will have lost a major client as Europe seeks her energy from Israel. Iran will seek revenge for her crushed nuclear ambitions, and will also seek to bring out the 12th Imam from his hole in the ground. Certainly adequate motivations for an Ezekiel 38-39 scenario and formidable foes to keep the other nations at bay from bailing out Israel.

As the Middle East goes up in flames, and America falls into irrelevance, a man will step forward out of the shadows of the former Roman empire and will have a peace plan that actually works. He will succeed where all his previous predecessors have failed, thanks in large part to the foundation already being laid by the UfM, and the technological spiderweb of control that is unique to this generation. All he therefore needs is the right time and the right emergency.

As Rahm Emanuel famously once said, “You never let a serious crisis go to waste.”

Originally Published at the Omega Letter

Since I first wrote this back in 2012, soooo much has happened.

1. Israel has discovered more natural gas than it knows what to do with. Certainly, more than they can use as a small nation, with a small population, and mild winters. (Source)

2. Israel, Cyprus, and Greece have finally agreed to the deep sea pipeline that will link Israel to Europe, via Cyprus and Greece. Of course, Turkey is none too happy. (Source)

3. With Europe’s intense focus on climate change, this natural gas surplus presents all kinds of opportunities for the UfM. (Source)

4. Former Libyan strongman Muammar Gaddafi once said back in 2007 when declaring that Libya would NOT be joining the UfM, “We shall have another Roman empire and imperialist design. There are imperialist maps and designs that we have already rolled up. We should not have them again.” (Source) Interestingly, both France and the US then systematically sought to destroy him (Check) and bring in Libya kicking and screaming none the less (Check). This explains why both Russia and Turkey have had such an interest in what used to be Libya today.

5. The 2020 “Deal of the Century” via the Abraham Accords, presents some obvious winners and losers. Winners: Israel and the US. Losers, the Palestinians, Russia, Turkey, and Iran. Saudi Arabia is seeking something that has largely remained off-radar in most people’s attention: “The Saudis want control over the Temple Mount. They already control the two most important Muslim sites and this is the third. For Prince Salman, that would be a significant bargaining chip in his dealings with the Saudi religious establishment. Controlling the three most important sites in Islam will make Riyadh the undisputed leader of the Muslim world and will be a crushing defeat of Turkish President Erdoğan’s ambition to lead the Islamic world.” (Source)

6. The massive explosion in Beirut, Lebanon on August 4th, 2020 has afforded France’s Emmanual Macron an opportunity to once again, reassert itself into Lebanese politics. (Source)

7. Trump calls out Germany’s Angela Merkel NATO-hypocrisy for backdoor deals with Russia on natural gas. Russian pipeline (Nordstream 2) was halted (Dec 2019) and may drive the EU to Israel instead of Russia. (Source)

Through the Looking Glass

Through the Looking Glass By Pete Garcia “If I had a world of my own,…

The Soul of a Nation

Here There Be Monsters

Here there be Monsters By Pete Garcia Author’s note: Originally written on November 13, 2013,…

The Mark of the Beast – Part 1

The Mark of the Beast – Part 2

The Mark of the Beast - Part 2 Mystery-Babylon Inc. By Pete Garcia A couple…

The Mark of the Beast – Part 3